3D Printers Are Here—And They Make More Than You Think

Update Required To play the media you will need to either update your browser to a recent version or update your Flash plugin.
By Mario Ritter
2010-10-28 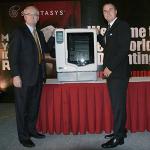 When we print something, a flat page comes to mind. For example, you might use a photocopier.

Now, imagine how this would work for three dimensions. A machine prints layers of material—usually plastic—one on top of the other. The layers are very thin—usually one-fifth or one-tenth of a millimeter. The layers then combine to form a solid object.

There are many versions of this kind of technology. But the basic idea is the same for most 3-D printers. The process is called additive fabrication.

These 3-D printers have become powerful tools for product designers. Computer-aided design programs use software to direct the printer. Designers can then create a solid model in a short time and easily make changes and tests.

The 3-D printing technology was first developed in the nineteen eighties. But high cost put them out of the reach of many researchers and businesses. Early printers were limited. High cost and limited uses meant the 3-D printer market was small.

Now, lower-cost printers are available to a much wider market, including small businesses and individuals.

In January, the global technology company Hewlett-Packard agreed to sell 3-D printers manufactured by Stratasys. Stratasys has made 3-D printers for years. Last year, it introduced one for less than fifteen thousand dollars.

More companies are using 3-D printing to directly manufacture some products. For example, Freedom of Creation, based in Amsterdam, the Netherlands, prints furniture and art. Bespoke Innovations in San Francisco, California wants to design and print artificial limbs. Co-founder Scott Summit says these prosthetic limbs can be designed exactly for a patient's body for less money than existing products. 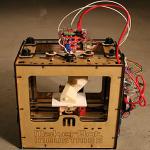 But 3-D printing still has limits. For example, metals are more difficult to print than plastics. However, airplane maker Boeing prints some airplane parts. And printers are being used to create some rare parts for old machines.

For people interested in new technology, a New York based company, Makerbot, sells kits to people who want to build a small 3-D printer. Some kits cost less than one thousand dollars.

And that's the VOA Special English Economics Report, written by Mario Ritter. For transcripts and MP3s go to 51voa.com. And follow us on Facebook, Twitter, YouTube and iTunes at VOA Learning English. I'm Steve Ember.