Update Required To play the media you will need to either update your browser to a recent version or update your Flash plugin.
By Mario Ritter
2010-12-30 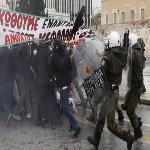 Here are some of the top economic stories of two thousand ten. The world continued to struggle with a slow recovery from the financial crisis two years earlier. Greece admitted to bigger-than-expected budget deficits. Investors punished Greece with much higher borrowing costs. The sixteen countries that use the euro joined the International Monetary Fund in offering loans of about one hundred forty billion dollars in May.

But, Greece had to agree to deeply cut government spending. Some demonstrations against the measures turned violent.

And debt problems extended beyond Greece. Ireland asked euro-area members and the IMF for help last month. Its rescue was even bigger, considering the size of the Irish economy.

Euro-area nations have set up a bailout fund of about one trillion dollars. But the IMF worries that may not be enough. Portugal, Spain and Italy could soon require emergency loans. And the euro has declined, making imports more costly for the area's struggling economies. 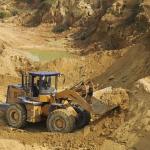 Rare earth mining in Jiangxi, China. To see a chart of world production and Chinese exports, click on Related Links, above

China's exports of important industrial metals also made news this year. China temporarily cut off rare earth metals meant for Japan after a territorial dispute in September. China controls nearly all of the rare earth metals market. These metals are used in everything from smart bombs to batteries. China recently announced lower export limits for rare earths for next year.

In the United States, the central bank took steps to speed recovery. The Federal Reserve announced a plan to add six hundred billion dollars to the economy. The goal is to keep long-term interest rates low and make investment--and hiring--easier. Unemployment remained above nine percent all year.

On Wall Street, a sudden drop in a big stock index shocked investors on May sixth. The Dow Jones Industrial Average dropped about nine percent in less than an hour before mostly recovering. A five-month federal investigation of the so-called flash crash suggested a single big trade may have been the cause.

HANS TIMMER: "By far the most, the biggest story is the very strong performance of the emerging economies."