Update Required To play the media you will need to either update your browser to a recent version or update your Flash plugin.
By Caty Weaver
06 February, 2018


Pope Francis reportedly received a letter in 2015 that describes a Chilean church cover-up of sexual abuse by a priest there.

The pope had said recently that no victims had reported a cover-up.

But one victim wrote in an eight-page letter that several clergy members witnessed and tried to hide the abuse, including Juan Barros. He is the Bishop of Osnorno, Chile, and was appointed by the Pope in early 2015.

Member of Francis' sex abuse commission told the Associated Press that the victim's letter was given to the Pope.

Pope Francis has repeatedly said that he has "zero tolerance'' for sex abuse or attempts to hide it or protect abusers. He also has expressed his understanding and sympathy for abuse survivors.

But last month, demonstrators in South America protested a visit by the Pope because of his forceful defense of Barros.

Barros is accused of witnessing and ignoring sex abuse by Chilean priest Fernando Karadima. During the Pope's trip to South America, he dismissed accusations against Barros as "slander." 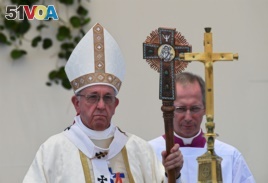 The Pope spoke to an AP reporter on his flight home. He said, "You, in all good will, tell me that there are victims, but I haven't seen any, because they haven't come forward."

Yet members of the Pope's Commission for the Protection of Minors say the Roman Catholic Church leader did have such information. The team says it sent a delegation to Rome in April 2015 to give the letter about Barros to the Pope.

Victim's letter reportedly given to Pope

The victim, Juan Carlos Cruz, wrote in the letter that Karadima had repeatedly sexually assaulted him. He said Barros and others saw the assaults and did nothing to stop them.

Four members of the commission met with Francis' top abuse adviser, Cardinal Sean O'Malley. They explained their objections to Francis' appointment of Barros as a bishop in southern Chile.

They also gave O'Malley the letter to give to Francis.

Marie Collins was a member of the commission. She was at the meeting. "When we gave him (O'Malley) the letter for the pope, he assured us he would give it to the pope and speak of the concerns," she told the AP. "And at a later date, he assured us that that had been done."

Cruz said he was told the same thing later that year. He spoke to the AP in an interview from his home in Philadelphia, Pennsylvania.

"Cardinal O'Malley called me after the Pope's visit here in Philadelphia and he told me, among other things, that he had given the letter to the pope in his hands,'' Cruz said.

Neither the Vatican nor O'Malley answered requests for comment.

Cruz arrived at Karadima's community in 1980 as a troubled teenager whose father had recently died. Cruz has said Karadima told him he would be like a spiritual father to him.

Cruz provided AP reporters with a copy of his letter. In it, he asks for Francis to honor his promise to punish abusers and those who help them.

Following testimony from Cruz and other former members of the local church, the Vatican removed Karadima in 2011 from religious leadership and sentenced him to a lifetime of ''penance and prayer'' for his crimes.

Karadima is now 87 years old and lives in a home for old priests in Santiago. He has not publicly commented on any of the reports and does not accept calls or visits from the news media.

Barros has repeatedly denied witnessing any abuse or covering it up. ''I never knew anything about, nor ever imagined, the serious abuses which that priest committed against the victims,'' he told the AP recently. The Vatican announced last week it was sending its most respected sex-crimes investigator to take testimony from Cruz and others about Barros.

Although the Vatican and Chilean government officials considered the victims' testimony credible, the local church did not. That may have influenced Francis's view. Chilean Cardinal Francisco Javier Errazuriz Ossa has said he did not believe the victims at first and cancelled an investigation as a result. He was forced to reopen it when the victims made their case public. He has also apologized.

Errazuriz is one of the Pope Francis's key cardinal advisers.

By the time Cruz got his letter to cardinal O'Malley in 2015, he had already sent versions of it to many other people. He and other survivors had tried for months to get an appointment with the Vatican ambassador to Chile. The embassy sent Cruz a short message in answer to an email he sent December 7, 2014 – one month before Barros was appointed bishop. It said "your request has been met with an unfavorable response."

priest - n. a person who has the authority to lead or perform ceremonies in some religions and especially in some Christian religions

zero tolerance - n. a policy of giving the most severe punishment possible to every person who commits a crime or breaks a rule

slander - n. the act of making a false spoken statement that causes people to have a bad opinion of someone

assure - v. to make (something) certain

interview - n. a meeting at which people talk to each other in order to ask questions and get information:

penance - n. something that you do or are given to do in order to show that you are sad or sorry about doing something wrong

commit - v. to do (something that is illegal or harmful)

testimony - n. something that someone says especially in a court of law while formally promising to tell the truth

credible - adj. able to be believed : reasonable to trust or believe