A Big Ruling for Wal-Mart in Sex-Discrimination Case

Update Required To play the media you will need to either update your browser to a recent version or update your Flash plugin.
By VOA
2011-6-23 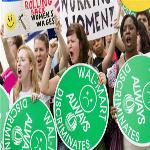 In the American legal system, people generally bring civil claims as individuals. But if a lot of people have similar claims, they may try to bring a class action lawsuit.

Michael Dorf is a law professor at Cornell University.

MICHAEL DORF: "A class action is a procedural device under US law that allows a large group of people to bring their individual claims together as a group."

But groups need permission to bring a class action, and that can be denied. That happened this week to a million and a half current and former employees of America's largest private employer. The women accuse Wal-Mart of discriminating against female employees in its stores. But the United States Supreme Court voted to block a huge class action against Wal-Mart in federal court.

The women were seeking billions of dollars. They say men were offered more jobs and more chances to move up in the company. They accuse Wal-Mart of violating part of a federal law, the Civil Rights Act of nineteen sixty-four.

The case started about ten years ago. A federal district court in California agreed that the case could go forward as a class action. Wal-Mart again lost in a federal appeals court. But on Monday Wal-Mart won its appeal in the nation's highest court.

Professor Dorf -- who was not involved in the case -- says the justices disagreed about whether there was a "common question."

MICHAEL DORF: "A common question, according to the court, is the sort of question which the plaintiffs can prove and thereby go a long way to winning the case."

He says most of the justices found that Wal-Mart was not being accused of one kind of discrimination or one policy, but many different acts.

MICHAEL DORF: "The key to being able to bring a class action here and the issue that divided our Supreme Court was whether all of these different claims -- by over a million people -- had enough in common to justify a single class action."

Wal-Mart has a policy barring discrimination. But the women accused the company of unfair policies and permitting bad behavior by some store managers.

Boston University law professor Michael Harper says the decision was widely expected. He says the class action failed because it did not target a single action or policy by Wal-Mart. But the ruling does not bar the women from bringing individual cases. They can also seek class actions at the state level.