A Crowd of Superheroes at the Movie Theater

Update Required To play the media you will need to either update your browser to a recent version or update your Flash plugin.
By Caty Weaver
2011-6-19 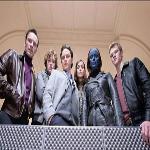 STEVE EMBER:Welcome to THIS IS AMERICA in VOA Special English. I'm Steve Ember.

SHIRLEY GRIFFITH: And I'm Shirley Griffith. Action, horror, love and laughter -- the summer movie season is here. And this week on our program, we take a look at some of the offerings.

STEVE EMBER: Kevin Bacon plays Sebastian Shaw in "X-Men: First Class" -- one of a crowd of movies based on comic book heroes. It tells the story of how the heroic X-Men and their usual enemies, the Mutant Brotherhood, came to be.

"First Class" is the fifth movie in the "X-Men" series. The first one came out eleven years ago.

Two other Marvel releases are "Thor" and "Captain America." But another choice is the "Green Lantern," based on the superhero series from Marvel competitor DC Comics.

SHIRLEY GRIFFITH: "Transformers: Dark of the Moon" is the third movie in the series based on the children's action toys.

(SOUND: "Transformers: Dark of the Moon") 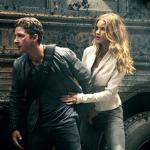 But, like a lot of these films, this one has a parental guidance rating of "PG-13." It contains science-fiction violence and also language that may be inappropriate for children under the age of thirteen.

STEVE EMBER: Films for the whole family include "Cars 2" and "Kung Fu Panda 2."

Jack Black is back as the voice of the giant panda Po and Dustin Hoffman returns as Shifu, a red panda and wise kung fu teacher. Here Shifu explains how he found inner peace.

SHIRLEY GRIFFITH: Another children's movie is "Judy Moody and the Not Bummer Summer." Jordana Beatty stars as Judy, a fun-loving third grader with big hopes for the summer. She wants to go to a circus camp. Her mom and dad, however, have different plans. 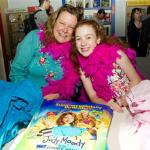 The parents take a trip to California. They leave Judy and her brother in the care of Aunt Opal, played by Heather Graham. Happily for the kids, Aunt Opal helps make an unforgettable summer.

(SOUND: "Judy Moody and the Not Bummer Summer")

The movie is based on the Judy Moody book series written by Megan McDonald.

Another children's book made into a movie is "Mr. Popper's Penguins." Jim Carey plays a successful businessman whose life -- and apartment -- are changed when six penguins are left in his care.

STEVE EMBER: Movie-goers can find love in films like "Crazy Stupid Love," All's Faire in Love" and "A Love Affair of Sorts."

But only the romantic comedy "Larry Crowne" stars two of Hollywood's biggest names. Tom Hanks plays a middle-aged man who has lost his job and his sense of security in life. He returns to college where he meets Julia Roberts, his teacher who has troubles of her own.

SHIRLEY GRIFFITH: Horror movie fans have several choices. In "Apollo 18," astronauts go on a secret, final mission to the moon -- and discover they are not alone.

The 3-D movie "Priest" is set in a dark future following years of war between humans and vampires.

Another vampire movie is "Fright Night."

And for scares without the vampires, there's "Don't Be Afraid of the Dark." Bailee Madison plays Sally, a young girl who goes to live with her father and his girlfriend. Soon, evil spirits in the house try to take Sally to the dark side. STEVE EMBER: "The Help" is a drama that takes place in the state of Mississippi in the American South of the nineteen sixties. It explores the relationships between wealthy whites and the blacks who work for them in their homes. The movie is based on the two thousand nine novel by Kathryn Stockett.

The main characters are a young white woman, Skeeter, and two black maids, Aibileen and Minny. They form a friendship when Skeeter asks if she can tell their stories in a book.

SHIRLEY GRIFFITH:"Life in a Day" began as a project on YouTube. Director Kevin MacDonald wanted to make a documentary that shows one day in the life of the world. He asked people to upload video taken on July twenty-fourth, two thousand ten.

More than eighty thousand people in one hundred ninety countries uploaded videos. People were also asked to tell what they love and fear, and what makes them laugh.

The result is the movie "Life in a Day," which opens in theaters in the United States this July twenty-fourth.

STEVE EMBER: Steven Spielberg is out with a new movie. He produced "Super 8," a film led by a cast of child actors, including Elle Fanning, the sister of Dakota Fanning. "Super 8" is about a group of young people in the nineteen seventies who decide to make a homemade horror movie. They accidentally record a train wreck and, in the process, uncover a top-secret military project.

Steven Spielberg can relate to "Super 8." He made homemade movies when he was young.

STEVEN SPIELBERG: "It's a lot easier today because it's so easy to get a video camera, go out and make a movie and you can put it right on YouTube. In a sense, not only can kids today make their own movies, they've?got distribution. We didn't have that in the eight-millimeter days. We had to lug a projector, we had to plug it in to somebody's wall, put up a screen and show it to someone patient enough to sit there for five minutes and watch. J. J. began his career the same way."

J. J. is "Super 8" writer and director J. J. Abrams. He compares the film to older movies like "E.T." and "Close Encounters of the Third Kind" -- both directed by Steven Spielberg. J. J. Abrams says the films are about more than the science fiction storyline.

J. J. ABRAMS: "They are all about suburban American ordinary people going through something that was hyper-real. There are fundamental and relatable relationships, broken families in some form, often friendships that are really critical and important."

Finally, we take our own trip to the movies. We asked some people what they think of the summer films they have seen so far.

REPORTER: "And you said you saw a movie fairly recently, a summer movie, what was that?"

REPORTER: "And what did you think of it?"

MOVIE GOER 1: "I thought it was very funny. It was the sequel, funnier than the first one, matter of fact."

REPORTER: "So are you more a comedy fan."

REPORTER: "So what horror movie are you going to see?"

MOVIE GOER 1: "We're actually going to go see ‘Super 8' now, which is kind of horror, sci-fi-ish. So, looking forward to it."

REPORTER: "What movie are you seeing?"

REPORTER: "And what do you think?"

MOVIE GOER 2: "I think it's hilarious, so far. It has me in tears right now."

REPORTER: "And, who does that star?"

REPORTER: "And what's your name?"

REPORTER: "And what did you go see today?"

REPORTER: "What did you think of "Mr. Popper's Penguins?"

MOVIE GOER 4: "I thought it was really cool. And, I thought Lovey was funny."

STEVE EMBER: And I'm Steve Ember. Have you seen any of the new movies? You can offer your opinions -- and read what other people are saying -- at voapsecialenglish.com. You can also write to us on Facebook and Twitter at VOA Learning English. Join us again next week for THIS IS AMERICA in VOA Special English.