A Debt Deal in US, but Stocks Still Slide

Update Required To play the media you will need to either update your browser to a recent version or update your Flash plugin.
By VOA
2011-8-4 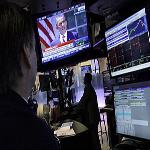 Photo: AP
A stock trader at the New York Stock Exchange watches President Obama on TV as he speaks to the nation about the debt agreement.

This week President Obama signed a bill raising the nation's borrowing limit. That debt deal, however, failed to keep stock markets from dropping. Prices fell sharply on growing economic concerns about the United States and the world.

The legislation followed months of arguing that only added to those concerns. Congress sent the bill to the president to sign into law on Tuesday. That was the last day the government said it had enough money to make all of its payments.

The Budget Control Act of 2011 lets the government seek financing to pay its bills until twenty-thirteen. Congress agreed to lift the debt ceiling by over two trillion dollars, but also to make spending cuts.

President Obama said it was a starting point.

BARACK OBAMA: "This compromise guarantees more than two trillion dollars in deficit reduction. It's an important first step to ensuring that as a nation, we live within our means. Yet it also allows us to keep making key investments in things like education and research that lead to new jobs. And assures that we're not cutting too abruptly while the economy is still fragile."

Richard Gordon worked with the International Monetary Fund for nearly ten years. He says there is a risk in cutting the federal budget too much when unemployment is high.

RICHARD GORDON: "If the federal government does not put money into the economy, the economy will stall. And that will result in another recession, and that cannot help anybody."

The national debt is more than fourteen trillion dollars. At the end of last year, private investors in the United States held the largest share -- thirty-six percent of that government debt. China was the single largest foreign holder of Treasury securities, followed by Japan and Britain.

On Wednesday, China's Dagong credit rating agency downgraded American debt. It said the budget deal did nothing to improve the United States' ability to pay its debts. Still, the government has had no trouble finding investors, and its borrowing costs have even fallen.

The Budget Control Act calls for almost one trillion dollars in spending cuts over ten years. A committee of six Democrats and six Republicans will have to identify another trillion and a half dollars in deficit reductions.

What happens if the committee cannot agree? Then an enforcement measure known as a trigger would go into effect. It would cut money from domestic and defense programs, but not in popular social programs for retirees and the poor.

The budget deal contained no tax increases, but that issue has not gone away. Richard Gordon -- now a law professor at Case Western University in Cleveland, Ohio -- says the deal leaves a big question.

RICHARD GORDON: "What is going to be the economic policy of the federal government in the next two years?"