Update Required To play the media you will need to either update your browser to a recent version or update your Flash plugin.
By VOA
2010-12-1 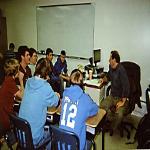 Most American schools have boys and girls in the same classroom. But a public high school in the small, rural town of Boonsboro, Maryland, offers a special program. Top students in the ninth and tenth grades can attend single-sex classes for math, science, English and social studies.

The aim is to help teenagers keep their mind on their work by keeping males and females apart.

Rebecca Brown chooses the students for what Boonsboro High School calls the Academy.

REBECCA BROWN: "What we really want to do is take that top group of kids and take them to the very highest level they can achieve here, so that they're prepared for college."

Placement in the Academy is voluntary. Students are invited after middle school.

They need high marks and test scores and strong teacher recommendations. They also need to be involved in activities.

Almost three hundred fifty students have taken part in the Academy. It began as an experiment in two thousand four.

Michael Bair has been at Boonsboro High for twenty years and directs the Academy. His ninth-grade English class for boys centers on books that he believes boys find interesting.

MICHAEL BAIR: "The novels they're reading now, for lack of a better phrase, they're very manly novels. They're novels that deal with the arrogance of man and the pride of man which is ultimately man's downfall."

One of those books, for example, is "The Call of the Wild" by Jack London. This classic story tells of a dog stolen from his home and sold to work as a sled dog in Canada's Klondike Gold Rush.

On this day, the students are working in small groups. Vincent and Logan explain why they are drawing pictures that relate to the story.

VINCENT: "The main character, Buck, he gets abducted and they send him off to the Yukon in a train. So I'm drawing part of the story where he's in the train. It gets you to visualize the setting of the story and gets you to think more about what's going on in the story, the important events of the story."

LOGAN: "Instead of just doing work sheets about it, this is a lot more fun."

Morgan Van Fleet is a senior at Boonsboro High. She liked being in the Academy. She says boys and girls act differently when they are together in a classroom.

MORGAN VAN FLEET: "To me, it almost seems like it's hindering your chances at developing yourself because you're more focused on 'Oh, I wish they'd shut up. Oh, what do they think of me?' instead of focusing on what's the homework or what's going on in this class, what's the lesson."

There is one activity that girls and boys in the Academy do together. At the end of the day, many of them stay and help tutor students who are having trouble in school.