A New AIDS Plan for the US, and New Hopes for a Vaccine

Update Required To play the media you will need to either update your browser to a recent version or update your Flash plugin.
By Mario Ritter
2010-7-13 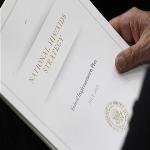 Photo: AP
A copy of the National HIV/AIDS Strategy. The plan calls for cutting infections in the United States by 25 percent in five years

Researchers, policy makers and activists are busy preparing for the International AIDS Conference. The next conference begins Sunday in Vienna, Austria.

On Tuesday, the Obama administration announced its National HIV/AIDS Strategy. The plan aims to reduce new HIV infections by twenty-five percent within five years. It also aims to make sure infected patients get treatment more quickly.

HIV is the virus that causes AIDS. The government says sixty-five percent of Americans who discover they are infected get treatment within three months. The new plan calls for increasing that to eighty-five percent.

Thirty million dollars from the health care reform law is to go to support prevention activities, including expanded HIV testing.

Over one million Americans are living with the virus, out of an estimated thirty-three million people worldwide.

Last week, government scientists in the United States announced the discovery of two antibodies that raise hopes for an AIDS vaccine. They say these antibodies can stop more than ninety percent of all known strains of HIV. Antibodies are proteins that the body makes to help protect itself against infection.

Researchers made the discovery at the National Institute of Allergy and Infectious Diseases. The director of its Vaccine Research Center, Gary Nabel, says each antibody blocks the virus from attaching to white blood cells.

GARY NABLE: "It reacts with that region, it inactivates the virus and the virus never has a chance to enter the cells that it would otherwise infect."

The antibodies were discovered in a man, known as Donor 45, whose body produced them naturally.

Patients with HIV must take medicine all their lives to prevent AIDS. Combinations of drugs are able to suppress the deadly virus in the body -- not a cure, but the next best thing.

In another development, the United Nations reported Tuesday that the number of young people becoming infected with HIV in Africa is falling.

The U.N. AIDS agency gives credit to better use of preventive measures. It says young people in Africa are waiting longer to have sex. They are also having fewer sexual partners. And they are increasingly using condoms. As a result, the agency says HIV rates are falling in sixteen of the twenty-five hardest-hit countries in Africa.