A New Book on Stealing Rembrandts and Other Artworks

Update Required To play the media you will need to either update your browser to a recent version or update your Flash plugin.
By Dana Demange
2011-9-6 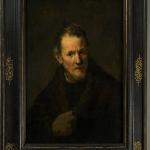 Photo: StealingRembrandts.com
Rembrandt's painting, 'St. Bartholomew,' was stolen from the Worcester Art Museum in 1972. It was recovered in the barn of a pig farm.

MARIO RITTER: And I'm Mario Ritter with EXPLORATIONS in VOA Special English. Today, we learn about a famous stolen art case and visit the Guggenheim Museum in New York City. We also learn about a technology that uses human energy to power devices like cell phones and computers.

FAITH LAPIDUS: Last month, a small drawing by the Dutch artist Rembrandt van Rijn was stolen from a hotel in southern California. The drawing was valued at more than two hundred fifty thousand dollars. The artwork mysteriously reappeared a few days later in a California church.

However, there are not always happy endings with other cases of stolen art.

The artworks were said to be worth hundreds of millions of dollars. None of them has ever been found. This remains the largest case of art theft in American history.

MARIO RITTER: Anthony Amore and Tom Mashberg wrote a new book about the history of thefts of Rembrandt works. The book is called "Stealing Rembrandts: The Untold Stories of Notorious Art Heists." 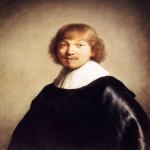 Rembrandt's 'Portrait of Jacob de Gheyn' has been stolen four times from the Dulwich Gallery in London.

Mr. Amore is a security expert. He currently heads security and the theft investigation at the Isabella Stewart Gardner Museum. Mr. Mashberg is an investigative reporter. Their book explores many interesting facts and stories about the world of art theft.

As part of his work on the Isabella Stewart Gardner Museum case, Mr. Amore says he began learning everything about Rembrandt thefts over the past century.

ANTHONY AMORE: "The first step was to research old police records, talk to federal agencies, look at old archived newspaper articles. And then, reach international organizations, Interpol and the rest. And then, through those, especially for older thefts that happened decades ago, I found that art thieves were willing to speak about what they had done."

FAITH LAPIDUS: Mr. Amore teamed up with Mr. Mashberg to write a book about the subject. Mr. Amore says they made interesting discoveries about art thieves in general.

ANTHONY AMORE: "These guys were involved in all kinds of theft. They were also familiar with robbing things like banks or pharmacies, armored car robberies, home invasions."

TOM MASHBERG: "And we were really shocked to discover that there had been eighty-one robberies involving Rembrandts in the last one hundred years. He left behind at least a thousand works in the United States, Europe, Canada, and other parts of the world. His name is so familiar even to the most common criminal."

FAITH LAPIDUS: Rembrandt is one of the most stolen artists of all time, second only to Pablo Picasso. Mr. Mashberg says the way art is shown openly in museums makes it easier to steal.

MARIO RITTER: Art theft takes place more often than one might imagine. Mr. Mashberg and Mr. Amore tell about several thefts in their book. In one case, Mr. Mashberg says criminals burned a painting by Rembrandt to avoid getting caught.

But Mr. Amore notes that in eighty percent of theft cases, the works are found unharmed. Mr. Mashberg says that unlike diamonds or gold, stolen art has little value on the open market. The art is too recognizable to be sold in the art world without attracting attention. So, criminals have a difficult time selling what they have stolen.

TOM MASHBERG: "We have several cases in the book where the thieves just gave up and left the paintings off in a public place, like a train station or a park and then called police and said why don't you just go pick it up. It's too much trouble."

This has not been the case for the Isabella Stewart Gardner Museum. But Tom Mashberg and Anthony Amore are hopeful that the Rembrandts stolen more than twenty years ago will be recovered. And, they say that based on history, stealing art does not pay.

FAITH LAPIDUS: For the first time, an American museum is holding an exhibit about the career of Korean artist Lee Ufan. The exhibit opened at the Solomon R. Guggenheim Museum in New York City earlier this summer. The show is called "Marking Infinity." It brings together seventy of the artist's paintings, sculptures and drawings.

Lee Ufan was born in Korea, but has lived and taught in Japan. In addition to being an artist, he is a philosopher and a writer. His work is simple and direct. For example, his sculptures involve carefully placed stones and pieces of steel. His paintings are limited to one or two colors, often with repeated shapes. 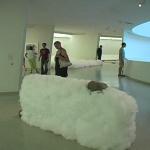 Opposites coexist in these Lee Ufan sculptures where heavy rocks and steel are held in the air by clouds of cotton.

Mr. Lee spent three weeks setting up his artworks at the Guggenheim Museum. He united examples from fifty years of his art into one statement. Many works are in the central room of the museum, which is in the shape of a spiral. The shape is a good choice for an artist who explores infinity in his work. Something that is infinite is unlimited and endless.

MARIO RITTER: Alexandra Munroe is the Guggenheim's expert on Asian Art. She says that ideas of change have influenced the work of Lee Ufan.

MARIO RITTER: Mr. Lee grew up during the Korean War. The political changes he witnessed during the nineteen sixties also influenced his work. He became the leader of an artistic movement in Japan called Mono-ha, or the "School of Things." He wanted to create a new kind of art that celebrated natural objects. This was art that paid attention to time and space and how an observer experiences the artworks.

ALEXANDRA MUNROE: "And there is another very important idea that you see both in his sculptures and his paintings, which I call the ethics of restraint. He's interested in the relationship between making and non-making."

FAITH LAPIDUS: Lee Ufan likes to work in series. A series of sculptures or paintings will explore a similar idea. For example, several paintings at the exhibit are called "From Point." In one work, the artist put blue paint on a brush. He touched the brush to the surface of the painting repeatedly in a straight line. Slowly, the paint disappears from the brush and the mark becomes lighter and lighter. The brushwork suggests movement and the passing of time. The work is a painting, but it also is like a performance because it shows the actions made by the artist.

The Lee Ufan exhibit continues at the Guggenheim Museum until the end of the month.

MARIO RITTER: Scientists in the United States are working on a technology that uses human energy to power devices like cell phones, laptop computers, and GPS systems. Tom Krupenkin teaches electrical engineering at the University of Wisconsin. He and his team want to reduce dependence on costly and polluting batteries. Instead of using batteries for power, they have turned to human beings.

MARIO RITTER: Professor Krupenkin and his team have placed a device in a shoe that collects and stores energy from human motion and turns it into electricity. One part of this device is an energy harvester. It has two small containers filled with thousands of very small drops of liquid. These droplets get pushed back and forth as a person walks. 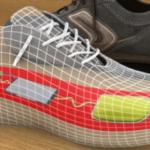 Artist's idea of a shoe embedded with components that collect and store power to run mobile devices.

TOM KRUPENKIN: "So it is essentially a flow of a fluid through flexible plastic tubes with embedded electrodes which are covered by a special material that we invented. These actually directly convert it into electric power. Now, the output of this energy is stored in a regular rechargeable tiny battery of the style that we have in cell phones."

FAITH LAPIDUS: The team has also developed a system to permit use of the stored energy by common mobile devices. It does not require connections with wires, and can be used to create a wireless signal. A cell phone that uses the wireless "hotspot" from the shoe would use much less power than if connected to a wireless telephone network.

The devices are about the size of a credit card. Professor Krupenkin says the system is always powered. So unlike a traditional battery, this energy harvester never needs to be recharged.

The professor says he does not expect this invention to replace traditional batteries. But it will help reduce dependence on them. He says the technology would be useful for people in some rural areas where there is no electrical power. He expects to have a commercial product on the market within the next two years.

FAITH LAPIDUS: And I'm Faith Lapidus. You can find our programs online with transcripts, MP3s, podcasts and pictures at 51voa.com Join us again next week for EXPLORATIONS in VOA Special English.