A Report on Cave Creatures and Ancient Villages

Update Required To play the media you will need to either update your browser to a recent version or update your Flash plugin.
By Dana Demange
2011-8-16 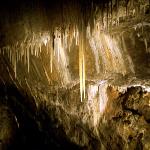 Photo: VOA - S. Schlender
Stalactites in the caves at Glenwood Caverns in Colorado

STEVE EMBER: And I'm Steve Ember with EXPLORATIONS in VOA Special English. This week, we learn about caves and their creatures, visit an archeological dig in Canada, and explore a house powered by the sun.

BARBARA KLEIN: For human ancestors, caves were considered places of wonder and mystery. Caves may not be so mysterious today. But they are still filled with unusual creatures and environments that hold great interest for both scientists and visitors.

There are millions of caves around the world. They often can be found on the side of a mountain or hill. Caves are home to some of the strangest creatures on earth. These include hydrogen-eating bacteria and insects without eyes.

Fred Luiszer is a cave expert and works at the University of Colorado in Boulder. He says that even space scientists are interested in life underground.

FRED LUISZER: "If they find life on other moons and other planets, life will probably be very similar to what we're finding in caves."

STEVE EMBER: In dark passageways, scientists have discovered small organisms that show promise in fighting cancer. But other cave life can be deadly. A sulphur cave in Colorado is home to a rare form of poisonous bacteria. Their formations look like mucus, the sticky material that protects breathing passages in the body. Frank Luiszer says their scientific name comes from the common expression for what drips out of your nose -- snot. 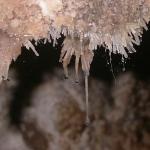 Snottite is a rare form of gooey, dangling, toxic bacteria that looks like mucus.

FRED LUISZER: "They are called snottites. I mean, when you look at one of them in the cave, it looks just like snot. I'm not kidding you."

STEVE EMBER: Snottites get their energy from sulfur in the air. They also produce a poisonous acid. This can make the cave dangerous for people who are not careful.

FRED LUISZER: "You pass out immediately. And if you stayed in that environment for probably, I'm guessing more than an hour or two, it would kill you."

BARBARA KLEIN: Not all things in caves are small organisms. Scientists in Colorado recently discovered a small, red scorpion-like creature that is blind. Bats also live in caves. Mark Maslyn is a geologist and caving expert. He says cavers must be careful not to harm bat colonies.

MARK MASLYN: "Bats are hibernating creatures. And if you wake them up during the wintertime, which is easy to do lights and noise and things like that, then they go outside and their food source, insects, is not available to them, and they die off."

BARBARA KLEIN: Wearing protective clothing, Mister Maslyn walks past visitors in the Cave of the Winds in Colorado Springs. He enters a hidden cave he helped discover.

MARK MASLYN: "This is not on the normal commercial tour."

STEVE EMBER: Using a headlamp for light, he opens an environmental door that leads to what he calls an "easy" tunnel opening. It measures half a meter in width.

STEVE EMBER: On the other side of this tunnel is a rock formation that looks like a large crystal flower. Such formations are called anthodites. Mark Maslyn says cavers in the past would take anthodites home with them. He says he always follows this advice for cavers: "Take nothing but pictures, leave nothing but footprints, kill nothing but time."

This is good advice to make sure that future generations will also enjoy visiting caves and their many natural wonders.

BARBARA KLEIN: Many archeologists believe that early humans came to North America by crossing the Bering Strait about fifteen to eighteen thousand years ago. They moved from place to place, hunting and gathering food. Starting about two thousand years ago, some tribes settled in large, permanent villages. An archeology project in western Canada aims to find out why this change took place.

Archeologists from Washington State University and the University of British Colombia are studying an early settlement of the Coast Salish people. Colin Grier is head of a ten-member team studying what he says is one of this group's best-protected villages.

COLIN GRIER: "Why did the transformation happen when it happened? That's probably the most difficult question to answer. When do people start to settle down?" 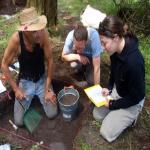 STEVE EMBER: Mister Grier's team wants to understand what caused a tribe that moved from place to place to settle and develop a more complex society.

In many cultures, the rise of village life is linked with the start of farming.

COLIN GRIER: "But of course, here no one invented agriculture."

BARBARA KLEIN: The archeologists have identified the ruins of six large houses, which formed two neighboring villages. The largest house could shelter as many as ten families. Experts say the buildings were occupied about one thousand five hundred years ago.

Professor Grier and his team can study objects in and around the ruins to learn about economic changes in the tribe. They can also learn about how tribe members gathered wealth and established a social class system.

One possible theory about why ancient tribes settled down and formed villages is because of population pressures.

STEVE EMBER: The researchers have worked closely on this project with a local Indian tribe. Penelakut tribal member Robert Sam says he believes ancestors of his lived in the village. He says he supports the dig.

ROBERT SAM: "It is really interesting to me to see the work that is being done. It shows more of where we were, all the sites that need to be catalogued for our people, our younger generation."

STEVE EMBER: Like other tribes, the Penelakut are concerned that archeological digs could harm human remains. But Mister Sam says there is little risk of that since burial areas were outside the village.

Colin Grier has worked in this area off and on since nineteen ninety-seven. He has enough financial support for two more summer seasons. He hopes that is long enough to learn more about the Salish people.

BARBARA KLEIN: College students from all over the world are competing in the United States Department of Energy's Solar Decathlon. Their goal is to design and build the most inventive, least costly and good looking solar-powered house. The Department of Energy says the event helps educate students and the public about clean-energy design and its cost-saving possibilities.

Teams competing for the top prize will be rebuilding their completed projects next month on the National Mall in Washington, D.C.

STEVE EMBER: One of the teams is from Middlebury College in the state of Vermont. This is the first time that students from Middlebury have taken part in the Solar Decathlon since it was first held nine years ago.

Students have been building the small house for months. Middlebury student Addison Godine says that during the summer he worked on the house about ten hours a day.

ADDISON GODINE: "Yeah, it's been a lot of work, but it's finally paying off. The house looks as good as we could have hoped just considering we're the liberal arts team against Cal Tech and all sorts of engineering schools like that. We're the underdogs, but we think we'll do okay."

BARBARA KLEIN: The Department of Energy chooses twenty teams for the Solar Decathlon. Each must design and build a house that is one hundred percent powered by the sun. This is the first year the houses will also be judged on their cost effectiveness. Team Germany won the competition in two thousand nine.

That year, Middlebury students traveled to Washington to see the winning house and the others. They decided they wanted to create a family home, not a single person home. The Middlebury solar-house is shaped like a traditional New England farmhouse. It includes two bedrooms, one washroom and a large living space.

MELISSA SEGIL: "People are immediately taken by the amount of light in the house. I think people also really like the kitchen."

STEVE EMBER: Students came up with ideas for the house, but had help from professional builders. The Department of Energy gave each team one hundred thousand dollars. But it will cost a lot more to build the house and travel to Washington. So students have raised money for the project.

The Middlebury College house is almost finished. Soon, students will have to take it apart, transport it to Washington, and rebuild it. Addison Godine says students at Middlebury learn a great deal about the world's problems, especially environmental ones. 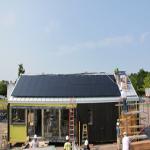 Professional builders worked with students to construct the solar-powered house.

ADDISON GODINE: "And this competition is our opportunity to create a solution to these problems. Which is really an amazing opportunity."

BARBARA KLEIN: The Solar Decathlon houses will be open to the public from September twenty third to October second. Like the Olympic decathlon, this event is made up of ten events. Houses are judged in ten areas including engineering, building design, communications, and energy balance.

The awards ceremony will take place on October first. The Department of Energy has videos from all twenty teams on its website. For a link to that page, visit our website, 51voa.com.

BARBARA KLEIN: And I'm Steve Ember. You can find our programs online with transcripts, MP3s, podcasts and pictures at 51voa.com Join us again next week for EXPLORATIONS in VOA Special English.