Update Required To play the media you will need to either update your browser to a recent version or update your Flash plugin.
By VOA
2010-9-10 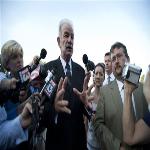 Photo: AP
Reverend Terry Jones of the Dove World Outreach Center speaks to the media in Gainesville, Florida, on Friday

These days, Americans worry most about an economic recovery that President Obama calls "painfully slow." But on Saturday millions will remember the day al-Qaida terrorists flew airplanes into the World Trade Center in New York and the Pentagon in Washington.

Another hijacked plane crashed in a field in Pennsylvania when passengers rebelled. Close to three thousand people died that day.

Next year will be a big anniversary, ten years since the day Americans call 9-11.

But this September eleventh comes at an uneasy time. A large number of Americans say they oppose plans to build an Islamic center near the World Trade Center site in New York.

This week attention centered on a Christian minister with a small following in the state of Florida.

Reverend Terry Jones said he would mark the 9-11 anniversary by burning copies of the Quran. He said he wanted to send a message to Islamic extremists.

His church in Gainesville has maybe fifty members. On Thursday, Mr. Jones met with a local Islamic leader in Florida and agreed to cancel the burning. He said the decision was part of an agreement to move the proposed mosque in New York.

But the imam leading that project denied any such agreement. In reaction, Mr. Jones said he was not canceling the burning, but was suspending it.

Political and religious leaders around the world had condemned him. The plan even led the State Department to warn American travelers to avoid places where protests might take place.

Administration officials called the idea of burning Qurans "un-American." But they also agreed that it would be within constitutional rights, like protesters who burn American flags. The Constitution guarantees free speech and bars the government from restricting the practice of religion.

President Obama has worked to improve relations with the Islamic world. On Thursday he extended greetings to the world's Muslims for Eid al-Fitr, the end of the holy month of Ramadan. A memorial with pictures of some of the 343 New York City firefighters killed at the World Trade Center on September 11, 2001

But many Muslim groups in the United States are limiting celebrations on Saturday because of the timing of Eid and 9-11 this year. A Muslim student leader at George Washington University, for example, called on Muslim students to take part in a day of community service.

On Friday, a new study said national security agencies have not changed enough to deal with new terrorist threats against the United States.

Experts warned of a growing threat from Americans going to other countries to train and work with terrorists. At least forty-three American citizens or residents linked to militant groups were charged with or convicted of terrorism crimes last year. These cases were in the United States and other countries, and were the most since 9-11.

The two former chairmen of the 9-11 Commission that investigated the attacks led the study.