Update Required To play the media you will need to either update your browser to a recent version or update your Flash plugin.
By Nancy Steinbach and Christopher Cruise
2011-1-24 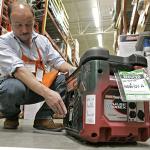 Photo: AP
All new portable generators in the U.S. must carry a warning about the danger of carbon monoxide poisoning

CHRISTOPHER CRUISE: And I'm Christopher Cruise. Winter has brought cold weather to many areas in Earth's northern hemisphere. With the cold comes a danger as old as man's knowledge of fire -- death or injury by carbon monoxide poisoning. Today, we tell about this ancient and continuing danger.

FAITH LAPIDUS: An eight year old boy died earlier this month in his home near Boston, Massachusetts. His mother reportedly had burned charcoal in the home. Police believe the boy died of carbon monoxide poisoning.

Also in January, carbon monoxide killed four members of a poor family in central California. A ten-year-old girl, her eight-year-old sister and two of their relatives died from the poison gas. It is said to have come from a gas-powered generator being used to heat the home. They were using the device because they had failed to pay their heating bill, and the company had turned off their heat.

CHRISTOPHER CRUISE: Carbon monoxide poisoning causes many deaths and injuries to people and animals around the world. The gas has been a problem since people first began burning fuels to cook food or to create heat. It is a problem in all parts of the world that experience cold weather.

America's Centers for Disease Control and Prevention has studied deaths caused by carbon monoxide poisoning. It found that the average number of carbon monoxide deaths in the United States was greatest in the month of January.

The CDC also found that carbon monoxide kills more than four hundred Americans each year. And, it said, more than twenty thousand people are taken to hospital emergency rooms for treatment of health problems linked to the gas. Four thousand of them had to stay in the hospital to be treated.

Carbon monoxide decreases the ability of the blood to carry oxygen to body tissues. It does this by linking with the blood. When the gas links with the blood, the blood is no longer able to carry oxygen to the tissues that need it. Damage to the body can begin very quickly from large amounts of carbon monoxide. How quickly this happens depends on the length of time a person is breathing the gas and the amount of the gas he or she breathes in. Another consideration is how much alcohol the person might have to drink.

CHRISTOPHER CRUISE: Carbon monoxide poisoning has warning signs. But people have to be awake to recognize them. Small amounts of the gas will cause a person's head to hurt. He or she may begin to feel tired. The person may feel sick. The room may appear to be turning around. The person may have trouble thinking clearly.

People develop severe head pain as the amount of gas continues to enter their blood. They will begin to feel very tired and sleepy. They may have terrible stomach pains.

A level of eight hundred parts per million will cause a person to lose consciousness. Victims will not know what is taking place around them. This will happen within two hours of breathing in this amount of carbon monoxide. Twelve thousand parts per million of the gas will cause death in one to three minutes. 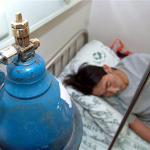 CHRISTOPHER CRUISE: Medical experts say carbon monoxide affects people differently. For example, a small child will experience health problems or die much quicker than an adult will. The general health of the person or his or her age can also be important.

An older adult with health problems may suffer the effects of carbon monoxide more quickly than a younger person with no health problems. People with heart disease may suffer chest pains. They may begin to have trouble breathing.

Experts say the leading cause of carbon monoxide poisoning is damaged or misused equipment that burns these fossil fuels. Many people die or are injured by the gas because they do not use these devices correctly. Any device used to heat a home should be inspected to make sure it is working correctly. And cooking equipment like a charcoal grill should never be used to heat an enclosed area.

CHRISTOPHER CRUISE: Fuel-burning devices can create carbon monoxide gas because not all of the fuel is burned. Most devices used for home heating have a way to expel the gas from the home. For example, a fireplace has a chimney. Natural-gas stoves or gas water heaters are usually connected to a device that safely expels the gas from the home. Automobiles also have a system for releasing unburned fuel.

Anyone who uses a device that burns fossil fuel must inspect the equipment carefully to reduce chances of carbon monoxide escaping. Companies that produce the devices usually provide directions about using the device correctly. These directions should be read and understood before using any equipment that burns fuel inside a home.

A small, portable generator used to create electricity during a power outage can be dangerous. The Centers for Disease Control and Prevention warns that such a device can kill within minutes when not used correctly.

Seek emergency medical services after you leave the area where you suspect the gas might be. Usually, the treatment for carbon monoxide poisoning involves breathing in large amounts of oxygen. However, a doctor will know the best method to treat the effects of such poisoning.

Carbon monoxide does not quickly leave the body, even after treatment has begun. It can take several hours before the gas disappears. If you suspect carbon monoxide is a problem in your home, call your local fire department. Many firefighters have the necessary equipment to find or identify the gas. 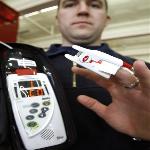 A Montpelier, Vermont, firefighter shows a device used to test if a person is suffering from carbon monoxide poisoning

CHRISTOPHER CRUISE: In many countries, it is possible to buy and use a special device that will warn when harmful levels of carbon monoxide are in the area. These devices can be linked to a home's electric system. Others are battery-powered. Experts say these devices should be placed near sleeping areas in the home and they should be tested at least twice a year.

The most important weapon against carbon monoxide poisoning is the safe use of materials to heat any enclosed area. Safety directions that come with heating equipment must be followed. Older equipment powered by fossil fuels should be inspected every year to make sure it continues to be safe. Knowledge about the dangers of carbon monoxide could be the most important information you ever learn.

FAITH LAPIDUS: This SCIENCE IN THE NEWS was written by Nancy Steinbach and Christopher Cruise. Our producer was June Simms. I'm Faith Lapidus.

CHRISTOPHER CRUISE: And I'm Christopher Cruise. You can find transcripts, MP3s and podcasts of our programs at 51voa.com. And you can find us on Twitter and YouTube at VOA Learning English. Join us again next week for more news about science in Special English on the?Voice of America.