A Story for Halloween: ‘The Boy on Graves-End Road’

Update Required To play the media you will need to either update your browser to a recent version or update your Flash plugin.
By Caty Weaver
2010-10-29 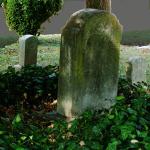 I'm Pat Bodnar. October thirty-first is Halloween. In the spirit of this ancient holiday, we present a story written by Special English reporter and producer Caty Weaver. It's called "The Boy on Graves-End Road.

NARRATOR: Kelly Ryan was making dinner. Her ten-year-old son Benjamin was watching television in the living room. Or at least she thought he was.

KELLY: "Benny-boy, do you want black beans or red beans?"

NARRATOR: Ben had come up quietly right behind her.

NARRATOR: Kelly goes to the phone, but as soon as she lays her hand on it, the ringing stops.

NARRATOR: Kelly turns her attention back to cooking. As soon as she does, the phone rings again.

KELLY: "Ben, your rice and beans are on the table. Let's eat."

KELLY: "So, what was that call about?"

BEN: "That was Wallace Gray. You know him, from class. He wants to play tomorrow. Can I go home with him after school? Please, Mom? I get bored around here waiting for you after work."

KELLY: "But, Ben, I don't even know his parents. Maybe I should talk to them."

BEN: "You can't, Mom. He was with his babysitter. He said his parents wouldn't be home until late tonight and they would leave before he went to school in the morning. Please Mom, Wallace lives right over on Graves-End Road. It's a five-minute walk from here. PLEASE,?"

KELLY: "Well, OK. What's so great about this guy, anyway? You've got a ton of friends to play with."

BEN: "I know. But Wallace is just different. He's got a lot of imagination."

NARRATOR: The school week passes, and Ben starts to go home almost every day with Wallace. Kelly notices a change in her son. He seems tired and withdrawn. His eyes do not seem to really look at her. They seem ... lifeless. On Friday night she decides they need to have a talk.

KELLY: "Sweetie, what's going on with you? You seem so tired and far away. Is something wrong? Did you and your new friend have a fight?"

BEN:"No, Mom. We've been having a great time. There's nothing wrong with us. Why don't you like Wallace? You don't even know him, but you don't trust him."

KELLY: "Benjamin, what are you talking about? I don't dislike Wallace. You're right, I don't know him. You just don't seem like yourself. You've been very quiet the past few nights."

BEN: "I'm sorry, Mom. I guess I'm just tired. I have a great time with Wallace. We play games like cops and robbers, but they seem so real that half of the time I feel like I'm in another world. It's hard to explain. It's like, it's like ... "

KELLY: "I think the word you're looking for is intense."

KELLY: "Well, tell me about today. What kind of game did you play?"

BEN: "We were train robbers. Or Wallace was. I was a station manager. Wallace was running through a long train, from car to car. He had stolen a lot of money and gold from the passengers. I was chasing right behind him, moving as fast as I could. Finally he jumps out of the train into the station to make his escape. But I block his path. He grabs a woman on the station platform. She screams 'No, no!' But he yells 'Let me through, or she dies.' So I let him go."

KELLY: "What happened then?"

BEN: "Well, that's what was weird and, like you said, intense. Wallace threw the lady onto the tracks. And laughed. He said that's what evil characters do in games. They always do the worst."

NARRATOR: Later, after Ben went to bed, Kelly turned on the eleven o'clock news. She was only half-listening as she prepared a list of things to do the next day, on Halloween.

NEWS ANNOUNCER: "... the victim, who has not been identified, was killed instantly. Reports say it appears she was pushed off the station platform into the path of the oncoming train. It happened during rush hour today. Some witnesses reported seeing two boys running and playing near the woman. But police say they did not see any images like that on security cameras at the station. In other news, there was more trouble today as workers protested outside the Hammond ... "

KELLY: "No! It can't be. The station is an hour away. They couldn't have gotten there. How could they? It's just a coincidence."

NARRATOR: The wind blew low and lonely that night. Kelly slept little. She dreamed she was waiting for Ben at a train station. Then, she saw him on the other side, running with another little boy.

It must be Wallace she thought. The little boy went in and out of view. Then, all of a sudden, he stopped and looked across the tracks -- directly at her.

He had no face.

NARRATOR: Saturday morning was bright and sunny, a cool October day. Kelly made Ben eggs and toast and watched him eat happily.

KELLY: "You know, Benny-boy, a woman DID get hurt at the train station yesterday. She actually got hit by a train. Isn't that strange?"

NARRATOR: She looked at Ben.

KELLY: "Well, you and Wallace were playing that game yesterday. About being at a train station. You said he threw a woman off the platform, and she was killed by a train."

NARRATOR: Kelly felt like a fool even saying the words. She was speaking to a ten-year-old who had been playing an imaginary game with another ten-year-old. What was she thinking?

BEN: "I said we played that yesterday? I did? Hmmm. No, we played that a few days ago, I think. It was just a really good game, really intense. Yesterday we played pirates. I got to be Captain Frank on the pirate ship, the Argh.

"Wallace was Davey, the first mate. But he tried to rebel and take over the ship so I made him walk the plank. Davey walked off into the sea and drowned. Wallace told me I had to order him to walk the plank. He said that's what evil pirates do."

KELLY: "I guess he's right. I don't know any pirates, but I do hear they're pretty evil!"

BEN: "So can I play with Wallace today when you are doing your errands? Please, Mom? I don't want to go shopping and putting up Halloween decorations."

KELLY: "Oh, whatever. I guess so. I'll pick you up at Wallace's house at about five-thirty, so you can get ready for trick or treating. Where does he live again?

BEN: "Graves-End Road. I don't know the street number but there are only two houses on each side. His is the second one on the left."

KELLY: "OK. I can find that easy enough. Do you still want me to pick up a ghost costume for you?"

BEN: "Yep. Oh, and guess what, Mom: Wallace says he's a ghost, too! I suppose we'll haunt the neighborhood together."

NARRATOR: Everywhere Kelly went that day was crowded. She spent an hour and a half just at the market. When she got home, decorating the house for Halloween was difficult.

But finally she had it all up the way she wanted.

NARRATOR: She jumped into her car and drove to Wilson Boulevard. The party store was just a few blocks away.

Kelly finally found a space for her car. The store was crowded with excited kids and hurried parents. But Kelly soon found the ghost costume that Ben wanted. She bought it and walked out of the store.

KELLY: "Eileen! Wow, it's great to see you. How's Matt? We've been so busy since the school year started, we haven't seen anyone!"

EILEEN: "Matt's good. Well, he broke his arm last month so no sports for him. It is driving him crazy, but at least he's got a lot of time for school now!"

EILEEN: "Anyway, Matt was wondering why Benny-boy never comes by anymore. We saw him running around the neighborhood after school last week. It looks like he's having fun, but he's always alone. We don't need to set up a play date. Ben should know that. You just tell him to come by anytime -- "

KELLY: "Wait, wait a minute. Alone? What do mean alone? He started playing with a new friend, Wallace somebody, after school, like everyday this past week. Ben hasn't been alone. Wallace Gray, that's it. Do you know him? Does Matt?"

EILEEN: "Oh, Kell. Kelly, I'm sure he's a fine kid. I don't know him but don't worry, Ben's got great taste in friends, we know that! I'm sure he wasn't really alone, he was probably just playing hide and seek or something. I didn't mean to worry you. I guess everybody's on edge because of what happened to the Godwin boy this morning."

NARRATOR: Kelly suddenly felt cold and scared. What Godwin boy? And what happened to him? She was not sure she wanted to know, but she had to ask.

EILEEN: "Frank Godwin's youngest boy, Davey, the five-year-old. You know Frank, we call him Captain. He used to be a ship captain. Well, this morning the rescue squad found Davey in Blackhart Lake. They also found a little toy boat that his dad made for him. Davey and his dad named it the Argh. Davey must have been trying to sail it. It's so sad."

EILEEN: "It's right off Graves-End Road, right behind that little cemetery. That's why they call it Graves-End. Kelly, where are you going?"

Kelly: "I've got to get Benjamin."

NARRATOR: Kelly raced down Main Street. She had no idea who Wallace Gray was or how he was involved in any of this. But she did not trust him and she knew her child was in danger.

Finally she was at Graves-End Road.

BEN: "Only two houses on each side."

NARRATOR: She remembered what Ben had told her.

EILEEN: "Right behind that little cemetery."

NARRATOR: And what Eileen had told her. Kelly got out of the car and walked down the street. She looked around.

NARRATOR: She could see the lake. Some fog was coming up as the sky darkened on this Halloween night. But there was no second house. Instead, what lay before her was grass and large white stones. The cemetery. Kelly walked through the gate into the yard of graves.

NARRATOR: No answer. She kept walking.

NARRATOR: Again no answer. But the wind blew and some leaves began to dance around a headstone. Kelly walked slowly toward the grave. Suddenly the sky blackened -- so dark, she could not see anything. She felt a force pushing at her. It tried to push her away from the grave. But she knew she had to stay.

KELLY: "Benjamin Owen Orr, this is your mother. Come out this second!"

NARRATOR: No one answered, except for the sound of the blowing wind. The darkness lifted. Silvery moonlight shone down directly onto the old gravestone in front of her. But Kelly already knew whose name she would see.

KELLY: "Wallace Gray this play date is OVER! Give me back my son. Wallace, you are in TIME-OUT."

NARRATOR: Suddenly, the ground shoots upward like a small volcano. Soil, sticks and worms fly over Kelly's head and rain down again -- followed by her son, who lands beside her.

KELLY: "Ben, I'm here, I'm here baby, right here. Oh, sweet Benny-boy. Can you breathe? Are you really ok? What happened? How long were you in there?"

BEN "I don't want to be a ghost for Halloween."

Join us again next week for another American story in VOA Special English.