A Tragedy in Norway Raises Questions for Europe

Update Required To play the media you will need to either update your browser to a recent version or update your Flash plugin.
By VOA
2011-7-29 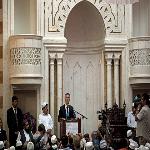 Conservative extremists in Europe are facing new attention after the attacks last week that killed almost eighty people in Norway.

On Friday the country held the first funerals for victims of the attacks.

Eighteen-year-old Bano Rashid was the first to be buried. She was Muslim but the ceremony also included Christian prayers. Ms. Rashid was a Kurdish immigrant from Iraq with an interest in politics. She was one of the people shot to death at a summer youth camp organized by Norway's governing Labor Party.

A sixty-ninth victim of that shooting died Friday.

Also Friday, Prime Minister Jens Stoltenberg led a national memorial service in Oslo, the capital. Mr. Stoltenberg said Norway had been hit by evil, and he called on the nation to unite around its values of democracy and peace.

The violence was Norway's deadliest since World War Two.

Thirty-two-year-old Norwegian Anders Behring Breivik has admitted responsibility. But he has pleaded not guilty to terrorism charges. He says he was part of a wider "crusade" against Muslim immigration and multiculturalism in Europe. Investigators say they believe he acted alone. They questioned him Friday for a second time.

Mr. Breivik's lawyer says his actions suggest he is out of his mind. Far-right groups across Europe have denounced his attacks.

European Union officials say they will form a team of experts to investigate non-Islamist threats in Scandinavian countries. The criminal intelligence agency Europol says the team may look at other European nations in the future.

A report this year from Europol said extreme left-wing groups carried out forty-five attacks in Europe last year. It said there were no terrorist attacks by right-wing groups, but extremists were increasingly active on the Internet.

Nigel Inkster is a director at the International Institute for Strategic Studies in Britain. He says Islamic terrorism is the most serious threat to European security. And, he says, it is much more difficult to investigate than right-wing extremism.

He says in Britain the threat from the extreme right normally does not come in the form of a major terrorist attack.

NIGEL INKSTER: "I think most of the violence that we have seen from extreme right-wing groups has been of a more, if you will, casual, street variety targeted against demonstrations by immigrant groups or simple attacks on immigrants."