Aaron Copland, 1900-1990: He Taught Americans About Themselves Through Music

Update Required To play the media you will need to either update your browser to a recent version or update your Flash plugin.
By Shelley Gollust
2011-8-13 Photo: loc.gov
Aaron Copland at home in his library

Music critics say Copland taught Americans about themselves through his music. He used parts of many old traditional American folk songs in his work. He was influenced to do this after studying music in France. He said that composers there had a very French way of writing music. He said Americans had nothing like that in this country. So he decided to compose music that was truly American. 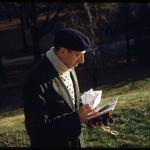 BARBARA KLEIN: Aaron Copland was born in nineteen hundred in Brooklyn, New York. He was the youngest of five children. His parents had come to the United States from eastern Europe. They owned a store in Brooklyn. Aaron began playing the piano when he was a young child. He wrote his first song for his mother when he was eight years old. His dreams of becoming a composer began when he was young.

When he was sixteen, he urged his parents to let him study composing with Rubin Goldmark. Goldmark had taught the composer George Gershwin.

STEVE EMBER: When he was in his early twenties, Copland went to Paris where he studied music with Nadia Boulanger. She was one of the most important music teachers of the time. He returned to New York in nineteen twenty-four.

BARBARA KLEIN: Copland later wrote the music for two ballets about the American West. One was about the life of a famous gunfighter called Billy the Kid. Copland used music from American cowboy songs in this work. This piece from "Billy the Kid: Ballet Suite" is called "Street in a Frontier Town." 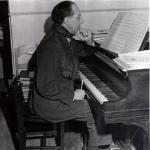 The famous composer began playing the piano as a child

BARBARA KLEIN: Also in nineteen forty-two, the music director of the Cincinnati Symphony Orchestra asked eighteen composers to write music expressing love for America. For the competition, Copland composed "Fanfare for the Common Man." This music is played in America during many national events, including some presidential inaugurations.

STEVE EMBER: Experts say "Fanfare for the Common Man" was an example of Copland's change in direction during the nineteen forties. He began writing music that was more easily understood and more popular. Copland wrote about this in nineteen forty-one in his book, "Our New Music." He wrote that a whole new public for music had developed as a result of the popularity of the radio and record player. He said that there was no reason to continue writing music as if these devices did not exist. So he decided to write music in a simpler way.

BARBARA KLEIN: Copland spread his ideas about music in other ways. He taught at the New School for Social Research in New York City and at Harvard University in Cambridge, Massachusetts. One of the many awards he received was the Pulitzer Prize. He won it in nineteen forty-five for his famous music for a ballet called "Appalachian Spring." It is one of his most popular works. The last part of the ballet is based on a traditional song, "A Gift to be Simple." 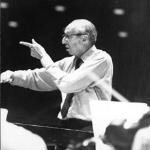 Aaron Copland was one of America's best modern music composers

STEVE EMBER: Copland also wrote music for several major motion pictures. He won an Academy Award in nineteen fifty for composing the music for the film, "The Heiress." Then, he began experimenting with what is called a twelve-tone system of composing. His music no longer was as easy to understand, or as popular.

Copland stopped composing at the end of the nineteen sixties. Yet he continued to be active as a conductor and speaker. In nineteen eighty-two, Queens College of the City University of New York established the Aaron Copland School of Music.

BARBARA KLEIN: Copland was a strong supporter of liberal ideas. In the early nineteen- fifties, he and other famous writers, actors and intellectuals were accused of supporting communism. Public opinion changed, though. In nineteen sixty-four, President Lyndon Johnson presented him with the Presidential Medal of Freedom. It is America's highest award to civilians. Aaron Copland died in nineteen ninety at the age of ninety. But his music lives on.

STEVE EMBER: This Special English program was written by Shelley Gollust. It was produced by Lawan Davis. I'm Steve Ember.

BARBARA KLEIN: And I'm Barbara Klein. Join us again next week for another People in America program in VOA Special English.