Update Required To play the media you will need to either update your browser to a recent version or update your Flash plugin.
By VOA
2012-3-2 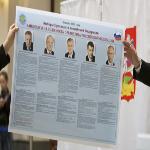 Russians vote for a new president Sunday, and Prime Minister Vladimir Putin is expected to win. There are five candidates on the ballot. The others include Communist Party leader Gennady Zyuganov and billionaire businessman Sergei Prokhorov.

There were reports of widespread cheating in the elections for parliament, the Duma, last year. Those claims led to the largest street demonstrations in the country since the Soviet Union collapsed twenty years ago. Protesters say Mr. Putin controls Russia through a heavily controlled political system and corruption.

Angela Stent is a Russia expert at Georgetown University in Washington. She was not surprised that the Prime Minister has blamed the United States in connection with the unrest.

ANGELA STENT: "He has really resorted to a tactic that, of course, has been used since he became president in two thousand -- and that is to invoke the United States [as the] enemy, to blame the United States for a lot of Russian problems. And as you saw, in the Duma elections, he then blamed Hillary Clinton, Secretary Clinton, for supporting the opposition and for trying to undermine Russian stability."

President Obama has made better relations with Russia an important part of his foreign policy. His dealings with Russian President Dmitri Medvedev led to a major arms-control agreement known as New START. It also led to increased cooperation on issues like Afghanistan, Iran and Libya.

But Russia joined with China in vetoing a United Nations Security Council resolution on Syria.

Sasha -- a Russian in his twenties who did not want to use his last name -- says he is tired of Mr. Putin. He says he is voting for Mr. Prokhorov, the co-owner of the New Jersey Nets basketball team. Mr. Putin has already shown all that he can do, Sasha says, and he has enough money.

But Anya -- who did not want to use her last name either -- says she is looking forward to Mr. Putin returning to the presidency. She says he helped bring Russia out of economic collapse in the late nineteen nineties.

Another Russian, Natasha, says she is not even going her to vote because she knows the ruling United Russia party will cheat and Mr. Putin will win. She says she does not think the elections will be clean unless there are cameras in the voting stations, as Mr. Putin has promised.

In the December elections, United Russia won the most seats. After criticism of the vote, Prime Minister Putin announced a one-half-billion-dollar program to place two Web cameras at each voting center. Russia has nearly one hundred thousand polling stations.

The last public-opinion survey before the election by an independent group suggested that Mr. Putin will win with sixty-two to sixty-six percent. In two thousand four he was re-elected with seventy-one percent of the vote.

Mr. Medvedev is expected to become prime minister in a new government.

A win on Sunday will make Mr. Putin the longest-serving leader in Moscow since Josef Stalin ruled the Soviet Union.

Two hundred thousand Russians have volunteered to watch for cheating on Sunday. A group called Citizen Observer has been training volunteers.  And that's IN THE NEWS in VOA Special English. I'm Bob Doughty.