Update Required To play the media you will need to either update your browser to a recent version or update your Flash plugin.
By Jim Tedder and June Simms
2011-3-28

CHRISTOPHER CRUISE: This is SCIENCE IN THE NEWS, in VOA Special English. I'm Christopher Cruise.

BOB DOUGHTY: And I'm Bob Doughty. Today, we will tell about American plans for space exploration after the space shuttle program. We tell how more and more Americans are using the Internet to gather information about their health. And we tell about a study that linked eating apples to a longer life.

CHRISTOPHER CRUISE: The end is near. The American space shuttle Discovery returned to earth on March ninth after visiting the International Space Station. Now there are only two shuttle flights left. The shuttle Endeavor is set for launch in the middle of April. Near the end of June, the shuttle Atlantis will return to space. Then, after thirty years and one hundred thirty-five flights, the shuttle program ends.

BOB DOUGHTY: So, what is next for NASA, the American space agency? The answer is...many things. But for a while, NASA will not be sending any humans into space. Using astronauts is costly.

Earlier this month, NASA signed a deal with Russia's space agency to transport American astronauts to the International Space Station. NASA says the agreement is worth more than seventy-hundred fifty million dollars. Under the agreement, the Russian space agency will take twelve astronauts to Space Station between twenty-fourteen and twenty-sixteen.

CHRISTOPHER CRUISE: In the months to come, the American space agency will mainly use robotic devices that explore planets and our solar system. Earlier this month, NASA scientists watched the spacecraft Messenger as it began to orbit the planet Mercury. It took Messenger six years to travel to Mercury. Over thirty years ago, NASA sent the Mariner Ten spacecraft to the planet closest to the Sun. But Messenger is the first to go into orbit around the planet.

Messenger has a lot of work to do. While in orbit, it will look for magnetized rocks in the planet's crust. Another experiment will make a highly detailed map of the surface of this very hot planet. Are there gases or minerals on Mercury? Messenger's scientific equipment will gather information and send it back to Earth, one hundred fifty-five million kilometers away.

BOB DOUGHTY: This August, the American space agency will turn its attention to the planet Jupiter. NASA plans to send the spacecraft Juno to the largest planet in our solar system. Juno will make thirty-two trips around the planet in about a year. It will attempt to learn how much water is in Jupiter's atmosphere. It will also try to find what is deep inside the planet. Scientists say that the information from Juno will help them understand the beginnings of our solar system.

The National Research Council advises the United States government on science, health, and technology issues. Earlier this month, the NRC suggested that NASA plan robotic missions to Mars, and to Europa, an icy moon of Jupiter. The Council says programs like these will provide the most scientific knowledge for the money spent.

CHRISTOPHER CRUISE: The United States Congress will decide NASA's budget for twenty-twelve. The Obama administration has asked for a small amount of money to aid commercial human space flights. The administration has asked for almost three billion dollars for NASA to start plans for something to replace the shuttles. Scientists think the next spacecrafts will be able to fly to the moon, asteroids, and other places much deeper in space than we have gone before.

BOB DOUGHTY: A new study shows that more than eighty percent of Internet users in the United States search for health information online. The study comes from the Pew Research Center's Internet and American Life Project and the California HealthCare Foundation.

Susannah Fox from the Pew Internet Project says doctors are still the main providers of health information. But the survey found that exploring the Internet is one of the leading ways that people look for a second opinion.

SUSANNAH FOX: "People are sort of fact-checking what they have heard from a doctor. Our studies show that people are still very likely to turn to a health professional when they need a diagnosis or are planning a treatment."

CHRISTOPHER CRUISE: Forty-four percent of people are looking for doctors or other providers when they search for health information online. Another finding of the survey: Two-thirds of Internet users look online for information about a specific disease or medical condition.

The Internet has also become an important resource of emotional support for people with health problems. Susannah Fox says one in five Internet users has gone online to find other people who have the same condition.

SUSANNAH FOX: "It was more prevalent among people with more serious health issues -- one in four people living with chronic disease. And it was basically off the charts with people living with rare disease. They are so eager to find other people online who share their health concerns."

BOB DOUGHTY: A disease is considered rare if it affects fewer than two hundred thousand people worldwide. The rise of social networking has made it easier for people with rare diseases to connect with each other and feel less alone. Social networking is also changing the way some doctors and patients communicate with each other.

JEFF LIVINGSTON: "It has just revolutionized the way we do health care."

BOB DOUGHTY: His medical center also has a Facebook page, a MySpace page and a Twitter feed.

CHRISTOPHER CRUISE: In the eighteen hundreds, the people of Wales advised, "Eat an apple on going to bed, and you will keep the doctor from earning his bread." In the United States, you are more likely to hear that "an apple a day keeps the doctor away." These sayings mean about the same thing. Red, green, or yellow...color is not important. People, and doctors, know that apples are good for you.

Now, a new report says that apples may even help you to live longer. The report was published in the Journal of Agricultural and Food Chemistry. Scientists at the Chinese University of Hong Kong used fruit flies in their tests. These small insects have many of the same genes as humans. The scientists gave some of them a substance from apples called polyphenol antioxidants.

Fruit flies normally live about fifty days. But the ones with the apple chemical lived about fifty-five days. That is a ten percent increase in lifespan! The researchers also found that the polyphenol antioxidents helped the flies walk, climb, and move around better as they got older. 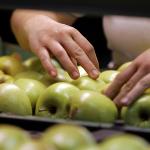 BOB DOUGHTY: Apples also contain fiber, which helps with the processing of food in the body. One kind of fiber, called pectin, helps to prevent fat from building up in the blood. Studies have shown that women who ate apples often had from thirteen to twenty-two percent less chance of having heart disease.

Another kind of fiber in apples helps food move through the body faster. That helps to keep intestines clean and healthy. And, of course, apples are rich in vitamin C, especially when you eat an uncooked apple, skin included.

CHRISTOPHER CRUISE: Some people think that apples can help people to lose weight. Apples are naturally low in calories. But the act of eating a fresh apple may also help, because breaking down the fruit takes time. Eating more slowly is better for your health. Apples need to be chewed and chewed and chewed. By the time you are done, your stomach feels full.

The Food and Agriculture Organization of the United Nations says apples are grown in many parts of the world. There are over seven thousand five hundred kinds of apples. China and the United States are the largest producers. But you can also find apples in South Africa, South America, Europe, South Asia, Australia and other places.

BOB DOUGHTY: Last year, eighty-six scientists from around the world found all the genes in "Golden Delicious" apples. They hope to use this information to make a fruit that is better tasting and more disease resistant.

So the next time you go to see grandmother and grandfather, take some apples along. They just might make them feel better and live longer.

CHRISTOPHER CRUISE: This SCIENCE IN THE NEWS was written by Jim Tedder and June Simms, who also was our producer. I'm Christopher Cruise.

BOB DOUGHTY: And I'm Bob Doughty. Join us again next week for more news about science in Special English on the Voice of America.