American History: The 1960s, a Decade That Changed a Nation

Update Required To play the media you will need to either update your browser to a recent version or update your Flash plugin.
By Jerilyn Watson
2011-11-16 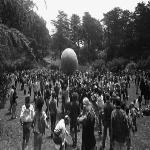 Photo: AP
Hippies gather in San Francisco's Golden Gate Park in June 1967 to celebrate the start of summer. Here they keep a large ball, painted to represent a world globe, in the air.

Today, we tell about life in the United States during the nineteen sixties.

The nineteen sixties began with the election of the first president born in the twentieth century -- John Kennedy. For many Americans, the young president represented a spirit of hope for the nation. When Kennedy was murdered in nineteen sixty-three, many felt that their hopes died, too. This was especially true of young people, and members and supporters of minority groups.

By the middle of the nineteen sixties, it had become almost impossible for President Lyndon Johnson to leave the White House without facing protesters against the war in Vietnam.

In March of nineteen sixty-eight, Johnson announced that he would not seek another term in office.

The two murders resulted in riots in cities across the country. The unrest and violence affected many young Americans. The effect seemed especially bad because of the time in which they had grown up.

By the middle nineteen fifties, most of their parents had jobs that paid well. They expressed satisfaction with their lives. They taught their children what were called middle class values. These included a belief in God, hard work and service to their country.

Later, many young Americans began to question these beliefs. They felt that their parents' values were not enough to help them deal with the social and racial difficulties of the nineteen sixties. They rebelled by letting their hair grow long and by wearing unusual clothing. Their dissatisfaction was strongly expressed in music.

Rock and roll music had become very popular in America in the nineteen fifties. Some people, however, did not approve of it. They thought it was too sexual. These people disliked the rock and roll of the nineteen sixties even more. They found the words especially unpleasant.

The musicians themselves thought the words were extremely important. As singer and song writer Bob Dylan said, "There would be no music without the words." Bob Dylan produced many songs of social protest. He wrote anti-war songs before the war in Vietnam became a violent issue in the United States.

One was called "Blowin' in the Wind."

In addition to songs of social protest, rock and roll music continued to be popular in America during the nineteen sixties. The most popular group, however, was not American. It was British -- the Beatles -- four rock and roll musicians from Liverpool.

The Beatles' song "I Want to Hold Your Hand" went on sale in the United States at the end of nineteen sixty-three. Within five weeks, it was the biggest-selling record in the country.

Other songs, including some by the Beatles, sounded more revolutionary. They spoke about drugs and sex, although not always openly.

(MUSIC: "Lucy in the Sky With Diamonds")

In the nineteen sixties, "do your own thing" became a common expression. It meant to do whatever you wanted, without feeling guilty. 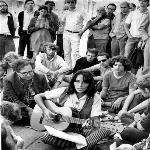 Five hundred thousand young Americans did their own thing at the Woodstock music festival in nineteen sixty-nine. They gathered at a farm in New York state. They listened to musicians such as Jimi Hendrix and Joan Baez, and to groups like The Who and Jefferson Airplane.

Woodstock became a symbol of the young peoples' rebellion against traditional values. Many young people called themselves hippies. Hippies believed there should be more love and personal freedom in America.

In nineteen sixty-seven, poet Allen Ginsberg helped lead a gathering of hippies in San Francisco. No one knows exactly how many people considered themselves hippies. But twenty thousand attended the gathering.

Another leader of the event was Timothy Leary.

He was a former university professor and researcher. Leary urged the crowd in San Francisco to "tune in and drop out." This meant they should use drugs and leave school or their job. One drug that was used in the nineteen sixties was lysergic acid diethylamide, or LSD. LSD causes the brain to see strange, colorful images. It also can cause brain damage.

(MUSIC: "Lucy in the Sky with Diamonds")

Some people say the Beatles' song "Lucy in the Sky with Diamonds" was about LSD.

As many Americans were listening to songs about drugs and sex, many others were watching television programs with traditional family values. These included "The Andy Griffith Show" and "The Beverly Hillbillies." At the movies, some films captured the rebellious spirit of the times.

These included "The Graduate" and "Doctor Strangelove."

DOCTOR STRANGELOVE (PETER SELLERS): "Deterrence is the art of producing, in the mind of the enemy, the fear to attack. And so, because of the automated and irrevocable decision-making process, which rules out human meddling, the Doomsday Machine is terrifying and simple to understand, and completely credible and convincing."

GENERAL BUCK TURGIDSON (STERLING HAYDEN): "Gee, I wish we had one of them Doomsday Machines."

Others offered escape through spy adventures, like the James Bond films.

Many Americans refused to tune in and drop out in the nineteen-sixties. They took no part in the social revolution. Instead, they continued leading normal lives of work, family, and home. Others, the activists of American society, were busy fighting for peace, and racial and social justice.

Women's groups, for example, were seeking equality with men. They wanted the same chances as men to get a good education and a good job. They also demanded equal pay for equal work.

A widely popular book on women in modern America was called "The Feminine Mystique." It was written by Betty Friedan and published in nineteen sixty-three. The idea known as the feminine mystique was the traditional idea that women have only one part to play in society. They are to have children and stay at home to raise them. In her book, Ms. Friedan urged women to establish professional lives of their own.

In the early nineteen sixties, a committee was appointed to investigate the condition of women. It was led by Eleanor Roosevelt. She was a former first lady. The committee's findings helped lead to new rules and laws. The nineteen sixty-four Civil Rights Act guaranteed equal treatment for all groups. This included women. After the law went into effect, however, many activists said it was not being enforced. The National Organization for Women -- NOW -- was started in an effort to correct the problem.

The movement for women's equality was known as the women's liberation movement. Activists were called "women's libbers." They called each other "sisters." Early activists were usually rich, liberal white women. Later activists included women of all ages, women of color, rich and poor, educated and uneducated. They acted together to win recognition for the work done by all women in America.

You can find our series online with transcripts, MP3s, podcasts and pictures at 51voa.com. You can also follow us on Facebook and Twitter at VOA Learning English. I'm Steve Ember, inviting you to join us again next week for THE MAKING OF A NATION -- American history in VOA Special English.