Update Required To play the media you will need to either update your browser to a recent version or update your Flash plugin.
By VOA
2011-8-31 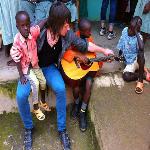 This is the VOA Special English Education Report. Current and former students from Berklee College of Music in Boston recently returned to the United States after three weeks in Kenya. They were part of a cultural exchange program aiming to influence lives through music. They taught music, performed and donated instruments to a Kenyan community center. They also learned about traditional Kenyan music.

Music is an important part of life in Kenya.

SAM LUTOMIA: "Growing up, I sang a lot in school. And we had competitions and choir and music every year."

Sam Lutomia works for the Berklee College of Music. He was born and spent his early years in Kenya.

SAM LUTOMIA: "When I moved to the States, I get exposed to a higher level of music. And I was like, ‘Is there something I can do now that I'm in the States?'"

He helped to create a group called Global Youth Groove. Its goal is to bring western music to young Kenyans, and get them to consider music as a career.

SAM LUTOMIA: "I started talking with students at Berklee College of Music and faculty members, and they all responded positively. And we started collecting instruments."

Thirteen Americans made the trip to Kenya in July. They included four high school students from the Boston area. One of them was Marina Miller.

MARINA MILLER: "We started out in Nairobi. We got a chance to meet with local musicians and listen to them play."

Project coordinator Aaron Colverson says the Americans presented a gift during a visit to Kakamega in western Kenya.

AARON COLVERSON: "We've gathered like 20 instruments. We had some recorders and also an entire drum kit, lap tops and recording software."

Many Kenyans attended the activities offered by the group.

Berklee student David Chapman says for some of the Kenyans, it was the first time to see and touch such instruments.

DAVID CHAPMAN: "Their music classes would just be them reading books about western instruments."

Aaron Colverson says music can give someone a sense of power.

AARON COLVERSON: "When you put music in front of kids, it seems that their minds open up. Music gives them a chance to express themselves through songs and writing the songs."

The American group also performed at a national music festival. During the trip, Aaron Colverson says, they met with local musicians and listened to them play. They also learned about traditional Kenyan instruments, dances and songs.

AARON COLVERSON (singing in Swahili): "It's pretty music to say nice to meet you, in Kenya where there are no worries."

Trip organizer Sam Lutomia says he is happy with the levels of energy the exchange program has produced. He hopes the trip will take place every year and expand to neighboring countries.

And that's the VOA Special English Education Report.  You and read and listen to our reports at 51voa.com.I'm Bob Doughty.