Update Required To play the media you will need to either update your browser to a recent version or update your Flash plugin.
By Christopher Cruise and June Simms
2012-2-28 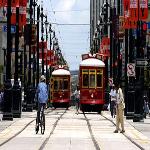 MARIO RITTER: Welcome to EXPLORATIONS in VOA Special English. I'm Mario Ritter. Some places can create strong memories. We often clearly remember important events in our lives and link them with the places where they happened. Many people remember exactly where they were when they heard very good or very bad news.

This week, we hear about a few special places. They are important to Americans who look to the past, but also are thinking of the future.

We hear about three historic homes where famous Americans once lived. We also visit a coastal town known for its wooden decoys.

But first we tell about New Orleans and its streetcars. Playwright Tennessee Williams thought enough of these vehicles to name one of his plays, "A Streetcar Named Desire." As we hear from Steve Ember, New Orleans is now expanding its streetcar system.

STEVE EMBER: Many American cities once had streetcars, but not anymore. Yet streetcars have been running in New Orleans for over 150 years. Anthony Falls has been driving streetcars for 10 years, and plans to keep doing so.

ANTHONY FALLS: "First of all, it's one of the most, the oldest rail lines in the world. And second of all, you know, it's just part of being part of history, you know. Because at one time, you know, they didn't have, you know, people of color driving the street car, you know. So I, you know, I think that's a big part of my job."

STEVE EMBER: The Saint Charles Avenue streetcar is said to be the oldest continuously-operating streetcar in the world.

FIRST WOMAN: "I've been riding the streetcars ever since I started high school. Sometimes we would go out to lunch, grab ... hop on the street car. It's convenient ... it's cheap ... and it gets you where you need to go."

SECOND WOMAN: "I think they're pretty cool, they're fun, you know. They're unique, and different. Like I said, we don't get that in California, where we are. So everything is on a rush. Get in the car, and hurry up and get to A to B. And it's a really neat way to see the sights."

MAN: "The reason why I like it? I don't know. It's a piece of history. They have these old cars, and they respect them, and they keep them running. You know, we can ride down here and be part of the living history of New Orleans."

STEVE EMBER: This year, the city is opening new streetcar lines. New Orleans is just one of about 20 American cities that are expanding or developing streetcar systems.

DOMINIC MONCADA: "With gas prices constantly increasing, a lot of public transit agencies are trying to find ways to modernize their systems, anything that, you know, has a better cost benefit for an agency."

MARIO RITTER: Historic homes can interest people seeking to connect with the former occupants. Barbara Klein tells us about three such homes, including a very simple, white house in Virginia. It is where a famous singer of the nineteen-fifties and sixties once lived.

BARBARA KLEIN: This small house in Winchester, Virginia, opened its doors to the public in August. It was home to singer Patsy Cline, who died at the age of 30. Judy Sue Huyett-Kempf is director of the Patsy Cline Historic House.

JUDY SUE HUYETT-KEMPF: "When she moved here, she was singing in local talent contests, church functions, anything that she could find at that point."

"That piano she got when she was eight years old."

BARBARA KLEIN: Patsy's first cousin, Patricia Brannon, shows the house to visitors. Patricia was six years younger than Patsy and often visited her as a child.

PATRICIA BRANNON: "Her mom, and her sister, and her brother and herself, was four of them. There was a not a whole lot of money. Like everybody else was hard time."

BARBARA KLEIN: Brannon's childhood memories helped return the house to the condition it was in in the late 1940s. She is pleased that Winchester is finally honoring her cousin, nearly 50 years after she died in a plane crash.

PATRICIA BRANNON: "They all said that she was born on the wrong side of town. But when they purchased the house and they restored it, I think that was one of the best things that happened."

BARBARA KLEIN: Huyett-Kempf says many people had been waiting for this recognition.

JUDY SUE HUYETT-KEMPF: "I mean this is where she lived. Where she walked, where she ate, where she slept. We can only allow 20 people at a time in the house because the house is very small. And in the first five days we did over 600 people."

BARBARA KLEIN: Babe Ruth is considered one of the greatest baseball players in history. He was born in this house in Baltimore, Maryland.

BARBARA KLEIN: Mike Gibbons is Executive Director of the Babe Ruth Birthplace and Museum. He says Ruth was the first sports superstar.

BARBARA KLEIN: Ruth's birthplace was supposed to be destroyed in the 1960s. The building was rescued by people in Baltimore, and has been open to the public for almost 40 years.

MIKE GIBBONS: "With his house we give them plenty of opportunities to touch where Babe Ruth, you know, walked around. Now he did not live here, but this was his grandparents' house, so he was in and out of this house for the first seven years of his life."

BARBARA KLEIN: Baltimore was also home to the famous writer Edgar Allan Poe. He is best known for his scary poems and stories. Poe's house is now the oldest in the city. Jeff Jerome is curator of the building.

JEFF JEROME: "We believe he lived here 1832 to 1835. He was around 25 years old at that time when he lived here and he shared this small house with his two cousins, Henry and Virginia, his aunt Maria Clemm, and his grandmother."

BARBARA KLEIN: Poe's attic bedroom looks much like historians believe it did when the writer lived there.

JEFF JEROME: "He probably, of course, had a bed, very similar to the one that we have. He had a chair, a washstand, and maybe a small table."

BARBARA KLEIN: Edgar Allan Poe is buried in Baltimore. Jerome says people travel from all around the world to visit Poe's house and his burial place.

JEFF JEROME: "We had a young lady, 16 years old, that came here from China with her father and she said she was a poet. I allowed her to sit in a chair that belonged to Edgar Allan Poe, and she started crying saying, ‘I'm not worthy. I'm not worth to sit in his chair.'"

BARBARA KLEIN: The house could close to the public in twenty-twelve because of financial problems. Jerome hopes that does not happen. He wants others like the young lady from China to get a chance to experience the house. I'm Barbara Klein.

MARIO RITTER: Years ago, Americans used decoys to hunt ducks and other waterbirds. Those days are gone. But collecting artful decoys is now popular. Faith Lapidus tells us about a place known for a long tradition of decoy crafting.

FAITH LAPIDUS: Havre de Grace is a town in the American state of Maryland. It sits close to where the Susquehanna River meets the Chesapeake Bay. Captain Bob Jobes goes fishing in these waters.

BOB JOBES: "A bushel of crabs, fresh out of Chesapeake Bay today."

FAITH LAPIDUS: This part of Maryland is famous for its wildlife. Havre de Grace is also known for a different kind of bird: Captain Jobes is is one of the top decoy carvers in Havre de Grace.

BOB JOBES: "It was just growing up as a kid, learning a skill how to do this. I got two brothers that carve, my son carves, and my father. Yeah. Three generations carving decoys."

FAITH LAPIDUS: Hunters use decoys to get ducks and geese to come close enough to shoot. The wooden birds are so highly respected here that Havre de Grace calls itself the decoy capital of the world. It also has a museum with more than 1,000 decoys. Most were hand made in the Chesapeake Bay area. John Sullivan is director of the museum.

JOHN SULLIVAN: "Approximately 14,000 visitors come here each year. We have visitors from all over the United States and all over the world."

FAITH LAPIDUS: Henry Miner came from the Chicago area to see the decoys.

HENRY MINER: "I particularly like the older ones, the very first style - and anything that's wood because nowadays everything is plastic or foam or... so they're all pretty neat to look at."

JOHN SULLIVAN: "You would use from 200 to 500 decoys around these gunning devices. And that demand put a lot of the housepainters and carpenters in the business of producing decoys."

FAITH LAPIDUS: The sink box was banned in 1935 and the demand for decoys dropped. The wooden birds became American folk art.

BOB JOBES: "People were collecting decoys, and we were selling so many decoys that we could just solely make our living off of carving. It's changing a little bit now, with the economy."

FAITH LAPIDUS: Decoys are beloved in Maryland. They sit in restaurants, store windows and in houses, including the home of Mitch Shank.

MITCH SHANK: "It was made in 1955 by my grandfather, R. Madison Mitchell. This is a special one. This is the year that I was born."

FAITH LAPIDUS: Madison Mitchell was the most productive decoy maker in Havre de Grace. Shank started collecting decoys as a young man, when he worked for his grandfather.

MITCH SHANK: "In Havre de Grace, if you drove around town and knocked on a door, most of the houses would probably have at least one decoy."

FAITH LAPIDUS: There are many at Vincenti Decoys. Jeannie Vincenti has operated the business for 17 years.

JEANNIE VINCENTI: "Well, our customers are local people who are aware of the tradition. There are also tourists that come in and don't understand quite exactly what a decoy may be, but then when they come in they find something in the store that they really like and consider a treasure."

JEANNIE VINCENTI: "There are younger people coming into it every day. Is it the number that we saw years ago? Probably not."

MARIO RITTER: This program was written by Christopher Cruise and June Simms. You can watch video versions of these stories on our website, 51voa.com.