Update Required To play the media you will need to either update your browser to a recent version or update your Flash plugin.
By Caty Weaver
2009-6-18

I'm Doug Johnson. Today we listen to music from a popular band of brothers ...

Answer a question about Blackwater ...

And talk about white roofs and green roads.

American Energy Secretary Steven Chu recently spoke to a group of Nobel laureate scientists. He told them that people could slow global warming by changing the color of the roof tops of buildings.

Mister Chu said sunlight, and its heat, will bounce off a white colored roof. Dark roof tops hold in more than eighty percent of the energy from sunlight. A white roof top reflects almost as much. This is why there are white and light colored buildings in many warm areas of the world.

Mister Chu said researchers at the Lawrence Berkeley National Laboratory in California estimated the effects that white roofs could have on the planet. Their study considers painting sixty-three percent of rooftops white in one hundred large cities in warm areas around the world. The scientists estimate this would have the same climate effect as taking all cars in the world off the road for ten years. It would also save money on indoor air cooling costs. However, some scientists question the numbers behind the science of white roofing.

Many American families are planning their summer vacations. A writer of environmentally friendly parenting books has some ideas for vacationing by car. Jenn Savedge's blog appears on the Mother Nature Network.

She writes that the most important thing on a road trip is planning. Try to find new and fun things to do as close to home as possible. Reduce waste by bringing food and drinks for the trip in re-usable containers. She also suggests staying at environmentally friendly places.

Also, when visiting other places, buy locally produced arts and crafts which support the community.

In the future car travelers may see signs of the Green Roadway Project. Inventors Gene Fein of California and Ed Merritt of Massachusetts came up with the idea. They designed a system of solar panels, wind turbines and other power gathering devices. These would be placed along roads, highways and railways throughout the United States.

The power gathered would be used to create energy for homes and businesses nearby. The roads would even have power stations for charging electric cars.

A spokeswoman for the Green Roadway Project says it would be a sign of hope for young people. She said children would "look out the window of their family car and see that clean energy is part of their lives." The project will be proposed to individual American states beginning in late July.

Our listener question this week comes from Yemen. Sameer Taher Mahdi heard the phrase "Blackwater in Iraq" on a news report. He asks what it meant.

Blackwater was the name of a private security and military training company. Erik Prince established the company in the American state of North Carolina in nineteen ninety-seven. Mister Prince is a former officer of the United States Navy's special forces known as SEALS.

The company has a huge training center in North Carolina that is used by the American military and other American security forces. Erik Prince has said that business really grew for the company after the attacks on the United States in two thousand one.

After that, the United States government employed Blackwater to work in Afghanistan and Iraq. Blackwater did not have to compete with any other security companies for the work.

Over the years several Blackwater employees were charged with crimes in Iraq, including murder. The worst incident happened in September, two thousand seven. Blackwater guards were accused of firing into a public square in Baghdad and killing at least fourteen civilians. The United States charged the guards involved.

In January, Iraq ended the right of Blackwater to work in the country. In February, Blackwater changed its name to Xe to help improve its image with the public.

Just this week, an investigation found that the State Department overpaid the company by tens of millions of dollars. The report said the company failed to supply enough people to protect American diplomats in Iraq.

That is the Mills Brothers singing "Glow Worm." The Mills were one of the early bands of brothers to become a big hit in the music industry. The Everly Brothers, the Beach Boys, the Allman Brothers the Jackson Five and others came later.

Another very popular band of brothers released its fourth album this week. Shirley Griffith tells about the Jonas Brothers and plays some of their music --- old and new. 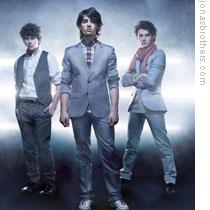 That was "Mandy" from the first album by the Jonas Brothers, "It's about Time." It was written a few years ago by the youngest brother, Nick Jonas. He is sixteen now.

In most families, the little brother follows the bigger ones around. But in the Jonas Brothers band, Nick is the leader. In fact his brothers call him "Mister President." Kevin, twenty-one, and Joe, nineteen, say they respect Nick's organizational skills and work ethic.

Nick formed the band in two thousand five, but he had performed in Broadway musicals since the age of seven. The Jonas Brothers started with Columbia records but were dropped from the label after their first album.

Disney-owned Hollywood Records then signed the brothers. Here the young men sing "When You Look Me in the Eyes," from "Jonas Brothers," their first album with Hollywood.

All the brothers play guitar, although Kevin leads. Nick and Joe are lead singers. Joe also plays keyboard. Nick is the lead songwriter. Their concerts are extremely popular, especially among young girls.

The band does not write Christian songs but the brothers are influenced by their religion. The band and other family members say a group prayer of thanks before each Jonas Brothers performance. And each brother wears a ring on the third finger of his left hand. It is a symbol of their belief in waiting until marriage to have sex.

Hollywood Records made a good move in signing the Jonas Brothers. Their second album with the company went to number one on Billboard Magazine popular music charts. One of the songs deals with the disease diabetes. Nick Jonas was found to have type one diabetes in two thousand five. Here is "A Little Bit Longer."

On Tuesday, the Jonas Brothers came out with their fourth record. Critics say "Lines, Vines and Trying Times" is an attempt by the band to move into the adult market without dismissing younger fans. Some reviewers say the record succeeds. Others disagree. You can decide for yourself. We leave you with "Black Keys" from "Lines, Vines and Trying Times."

I'm Doug Johnson. I hope you enjoyed our program today. It was written and produced by Caty Weaver. Join us again next week for AMERICAN MOSAIC, VOA's radio magazine in Special English.