Update Required To play the media you will need to either update your browser to a recent version or update your Flash plugin.
By Dana Demange and Caty Weaver
2009-9-10

This week on our program, we play music by a new country band called Love and Theft ...

And answer a question about social parties in the United States ...

But first, we tell about an organization that builds skate parks for young people living in cities.

Tony Hawk became a champion skateboarder in the nineteen eighties when he was a teenager. The sport helped him overcome emotional problems he faced as a young child. Now the Tony Hawk Foundation helps young people by building skate parks in cities around the country. Barbara Klein has our story.

Tony Hawk does not compete in skateboard competitions anymore. He retired from that part of his life ten years ago, at the age of thirty-one. But he still skates and he still works in the industry.

He is involved in a skateboard company called Birdhouse and a company called Hawk Clothing that makes clothing for skateboarders. He also created a popular video game series. In two thousand, Tony Hawk wrote a book about his life called "Hawk: Occupation: Skateboarder."

Two years later, he established his charity, the Tony Hawk Foundation. He says it reaches young people who might feel the way he did as a child.

TONY HAWK: "They don't find their place in the traditional team sports or ball sports and they're looking for something else. And, skateboarding, I think, is much more available to them and a lot of kids really enjoy that it's different."

The foundation has given away almost three million dollars since two thousand two. It has helped build more than four hundred skate parks across the United States. Tony Hawk says young skateboarders take part in designing and building the parks.

TONY HAWK: "And I feel like that's the real accomplishment for them, is that they saw it through. They cut through all the red tape and they finally made it happen. And there it is. There is literally concrete evidence of their work."

Our listener question this week comes from China. Vivien wants to know about parties in the United States. Americans plan parties for many reasons. As in other cultures, many Americans attend parties for weddings and religious and national holidays. But some parties are especially American.

For example, a group of neighbors may gather on their street to eat food, play music and visit with one another. This is called a block party. A woman might invite a group of women to a party called a baby shower for a friend who is about to give birth. Guests bring presents for the new baby.

Americans also attend tailgate parties. A tailgate is the back end of a truck or other vehicle that opens down. Tailgating parties are a big part of sports culture in the United States.

Friends bring food and drinks to a sports event. They eat together in the parking area of the sports stadium.

They gather around the tailgate to eat hotdogs and hamburgers cooked on a grill. There is a good chance that these tailgaters will also be drinking beer. 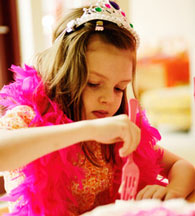 Birthday parties are also very popular. Many parents organize a party for their child around a theme. We asked a spokesman for a party supplier called the Oriental Trading Company what the most popular parties are right now. She says rock star parties are very popular for young girls and boys. And she says Luau parties with Hawaiian decorations and clothing are very popular with adults.

Birthday parties usually include gifts and a birthday cake with candles. In many parts of the United States, cupcakes have become a popular replacement for cakes. Cupcakes are individual sized cakes topped with a layer of sweet icing.

Birthday parties can be low cost or very costly. Some parents take their children's birthday parties very seriously, even when the child is too young to fully understand the celebration.

One group of parents started a Web site called Birthdays without Pressure. They decided that some parents were under too much social pressure to plan costly parties for their children.

The group sees this movement as an example of America's culture of "too much stuff." The group's Web site gives suggestions on how to keep birthday celebrations simple, meaningful and fun without spending a lot of money. Their advice may be all the more helpful during this period of economic recession.

Love and Theft is a new country band out of Nashville, Tennessee. The three member group took its name from the title of an album by Bob Dylan. Bob Doughty has our report on the band and its first studio album, "World Wide Open."

The men met in Nashville about three years ago. They had all moved to the city to study how to write music. The three immediately sensed that they got along well musically. They started writing songs and playing music together. Six months later they performed in public for the first time.

Their appearance led to a recording contract. Here is the title song from their album, "World Wide Open."

Last year, Love and Theft appeared in concerts as the opening act for country music star Taylor Swift. In March, the band performed for the first time at the famous Grand Ole Opry in Nashville. The band is also making radio and live appearances in support of their new album. Here the band performs "Can't Go Back" from "World Wide Open."

The first single released by Love and Theft deals with the risks the band members took to seek careers in the music industry. We leave you with that song, "Runaway," from "World Wide Open."

I'm Doug Johnson. Our program was written by Dana Demange and Caty Weaver, who was also our producer. For transcripts, MP3s and podcasts of our programs, go to 51voa.com. You can also comment on our programs.

Do you have a question about people, places or things in America? You can send it to mosaic@voanews.comand we may answer it on this show.