'A View From the Bridge' Is Looking Better Than Ever

Update Required To play the media you will need to either update your browser to a recent version or update your Flash plugin.
By Dana Demange, June Simms and Caty Weaver
2010-3-11 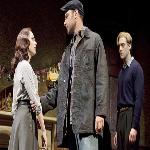 I'm Doug Johnson. Today on our program, we tell about a new staging of the famous Arthur Miller play "A View from the Bridge."

Answer a question about the Hollywood producer Jerry Bruckheimer.

"A View From the Bridge"

DOUG JOHNSON: Arthur Miller has written plays about an individual's struggle with social responsibility, family ties and power conflicts. His plays are about everyday people who are tragic heroes of modern life. Arthur Miller's nineteen forty-nine play, "Death of a Salesman," earned him a Pulitzer Prize.

His nineteen fifty-five play, "A View from the Bridge," is currently playing on Broadway in New York City's Cort Theater. The production has received wide attention because of two famous movie stars performing in the play. Steve Ember tells us more.

STEVE EMBER: "A View from the Bridge" is about Eddie Carbone, a dock worker living in the Brooklyn area of New York during the nineteen fifties. He lives with his wife, Beatrice, and his innocent seventeen year old niece, Catherine.

In this production, actor Liev Schreiber gives a firey performance as Eddie. Actress Scarlett Johansson plays the role of Catherine. It is the first time the well known film actress has performed on Broadway.

Much of "A View from the Bridge" takes place in the Carbones' small apartment. After a long day at work, Eddie returns home to his wife and the warm love of the niece he and his wife have raised. At first, nothing seems wrong with their life.

But then, two of Beatrice's cousins arrive illegally from Italy. Beatrice and Eddie let the two men stay with them and help them find work. Soon, Catherine falls in love with Rodolpho, one of the cousins.

Eddie is not at all happy with this development. Liev Schreiber does an excellent job of expressing his character's growing anger toward Rodolpho and his own problematic love for Catherine. Eddie has trouble accepting that she is no longer a little girl, but has become a beautiful woman. The sexual tension between him and Catherine starts to take over his life.

In the end, Eddie must make an impossible decision between love and betrayal. The questions the play brings up are as fresh today as they were fifty years ago. Critics have praised the play for its skillful acting and expressive lighting and set design. One critic said it is the best production of "A View from the Bridge" he has ever seen.

DOUG JOHNSON: Our listener question this week comes from Cameroon. Tamnjong Elvis Ali wants to know about Jerry Bruckheimer, one of the most successful movie and television producers in America.

Bruckheimer has made more than thirty successful movies. He is known for producing high budget action and adventure films. Some of his best known movies of the nineteen eighties include "Top Gun," starring Tom Cruise and the "Beverly Hills Cop" movies starring Eddie Murphy. More recently, he produced the "Pirates of the Caribbean" movies starring Johnny Depp as Captain Jack Sparrow.

Jerry Bruckheimer was born in Detroit, Michigan in nineteen forty-five. He began working in advertising in New York City. He left New York for Los Angeles, California in the nineteen seventies to find success in the film industry. He and long-time friend Don Simpson formed Simpson-Bruckheimer Productions. 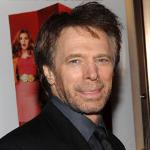 The company had its first hit film in nineteen eighty-three. "Flashdance" became the third highest box office hit of the year, earning more than ninety million dollars in the United States alone.

Jerry Bruckheimer and Don Simpson went on to produce a series of successful films, including "Bad Boys," "Crimson Tide" and "Dangerous Minds." "The Rock" was the team's last film together before the unexpected death of Don Simpson in nineteen ninety-six.

Since then, Jerry Bruckheimer has made many other successful movies. They include "Armageddon," " Pearl Harbor," "Black Hawk Down" and the "National Treasure" movies starring Nicolas Cage. Bruckheimer's Web site says his films have earned more than ten and a half billion dollars worldwide.

Jerry Bruckheimer has also produced many popular television shows. The most famous are his police drama series called "CSI": Crime Scene Investigation. He also produces the police drama about missing people called "Without a Trace." And the Emmy award-winning reality TV show, "The Amazing Race."

Jerry Bruckheimer has won many awards during his career, including several Emmys, Oscars, Grammys and Golden Globes. His newest film, "Prince of Persia" opens in theaters in May.

DOUG JOHNSON: Pat Metheny is an award-winning jazz guitarist, composer, band leader and producer. The fifty-five year old musician recently fulfilled a dream in the release of his album "Orchestrion." The recording includes Metheny's operation of many mechanical instruments, like the player piano. Faith Lapidus tells about the artist, the project and plays some music from "Orchestrion."

FAITH LAPIDUS: Pat Metheny started learning to play the trumpet when he was eight years old. But at age twelve he changed to guitar and never looked back. His Web site says he was working with professional jazz musicians by the time he was fifteen in his home town of Kansas City, Missouri.

Here is the title song from his new album, "Orchestrion."

Pat Metheny says he has always been interested in mechanical instruments. His grandfather was a musician and had a player piano that made music by itself. Metheny remembers spending hours playing with the instrument.

Metheny says he worked with inventors and technicians from around the country to build the robotic instruments used on "Orchestrion." He programs and controls every sound from his computer, guitar or keyboard.

Listen to "Expansion," from "Orchestrion."

Pat Metheny is now performing concerts in Europe. He begins shows in the United States next month.

Technicians join him on stage to fix the robot instruments when anything goes wrong. When repairs are not possible, Pat Metheny returns to what he is famous for --- simply great jazz guitar.

We leave you with "Spirit of the Air" from "Orchestrion."

DOUG JOHNSON: I'm Doug Johnson. Our program was written by Dana Demange, June Simms and Caty Weaver, who was also the producer. For transcripts, MP3s and podcasts of our programs, go to 51voa.com.

Do you have a question about people, places or things in America? Click Contact Us at the bottom of our Web site.