Update Required To play the media you will need to either update your browser to a recent version or update your Flash plugin.
By Kim Varzi and Caty Weaver
2010-3-18 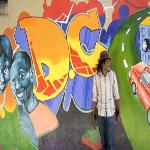 Photo: Kim Varzi
Nigerian-born artist Aniekan Udofia in front of one of his murals

I'm Doug Johnson. Today we tell about an artist in Washington whose work can be found on the sides of several city buildings. And we report on new members of the Rock and Roll Hall of Fame and play some of their music.

DOUG JOHNSON: Artist Aniekan Udofia is becoming well known because of his artwork on the walls of buildings in Washington, D.C. Barbara Klein tells us about this artist and his work.

BARBARA KLEIN: Aniekan Udofia was born in Washington to Nigerian parents who were studying at universities in the city. Then the family moved back to Nigeria. However, years later he returned to Washington to develop his skills in painting. Udofia's love of hip-hop music resulted in a group of paintings of hip-hop musicians. He created other images of famous politicians and human rights activists. He began painting about social issues as his artistic talent developed and his work changed. 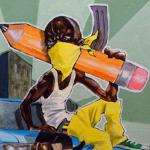 Sometimes he paints about corruption and conflicts in Africa. One group of his paintings is called the Pencil Gun Revolution. He chose to use pencils instead of guns to show how wars are really won. Some of the pencils in the paintings almost look like large machine guns. However, he notes the saying that "the pen is mightier than the sword." He says this is what the paintings are about.

Aniekan Udofia has become an artist in demand. The D.C. Commission on the Arts and Humanities has asked him to create large paintings on the walls of buildings. One of his earliest murals was for a community park. The images are about unity and peace using animals and people of all colors.

Udofia's work has developed throughout his years in Washington. He says one of his favorite paintings is one of his earliest pieces. It is a painting of a child in a village leaning on a large radio. He says it shows how music travels so far and sometimes changes society. The painting expresses the power of music as well as art. 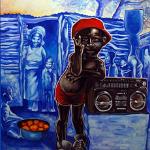 Aniekan Udofia has been invited to paint at many gatherings and community events. He creates a painting during the event so people can watch how the painting changes. One event was to raise money for the victims of the earthquake in Haiti. His painting was sold to the person who offered to pay the most money for it.

Rock and Roll Hall of Fame

DOUG JOHNSON: Last Monday night, more music performers, song writers and producers were honored as new members of the Rock and Roll Hall of Fame. The twenty-fifth yearly ceremony took place in New York City, although the Hall of Fame itself is in Cleveland, Ohio. Faith Lapidus tells about the newly honored music makers and plays some of their great sounds.

FAITH LAPIDUS: "I am the world's forgotten boy," Iggy Pop told the crowd gathered at the ceremony. Pop is the leader of the punk rock band the Stooges.

The group had been nominated seven times before it was finally honored by the Rock and Roll Hall of Fame. 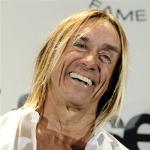 The Stooges formed in nineteen sixty-seven in Ann Arbor, Michigan. Iggy Pop became famous for his wild behavior on stage. The band's music is considered so influential that some critics say punk rock would not exist without the Stooges. Their albums "Funhouse" and "Raw Power" were especially important. Here is "Little Doll" from their first album, "The Stooges."

The Swedish pop band ABBA was hugely successful in the nineteen seventies and early eighties. ABBA never officially broke up. But the band has not played together since nineteen eighty-two. However, its greatest hits were used in the popular musical show "Mamma Mia" which opened on Broadway in two thousand one. In two thousand eight a movie version was released. One of the songs in "Mamma Mia" is "Dancing Queen" from nineteen seventy-six.

The leader of the band Phish, Trey Anastasio, spoke at the Hall of Fame ceremony about Genesis. He said the British band questioned and broke every musical rule and boundary.

He said it was impossible to overstate the influence Genesis had on him as a young musician. Genesis has been together with some member changes since nineteen sixty-seven. It started out playing progressive rock and producing concept albums. Later, the band began creating high quality pop music.

Here is Genesis with "Dancing with the Moonlit Knight," from its nineteen seventy-three album, "Selling England by the Pound."

Another British band, the Hollies, also was honored by the Rock and Roll Hall of Fame Monday night. Hollies member Graham Nash was especially excited because it was his second time. He was first inducted into the Hall of Fame in nineteen ninety-seven with his band Crosby, Stills and Nash.

The Hollies were part of the first wave of what was called "the British Invasion" of bands in the United States in the nineteen sixties. It included the Beatles and the Rolling Stones. The five members of the Hollies played solid, beat driven rock that included beautifully sung harmonies. Here is one of their top American hits, "Long Cool Woman (in a Black Dress)," from nineteen seventy-two.

Finally, Haitian musician Wyclef Jean gave a moving speech to honor Jamaican performer Jimmy Cliff. Jean said he was not permitted to sing anything but Christian songs as a child. But he loved Jimmy Cliff's music so much that he simply added Christian lyrics.

Jimmy Cliff has been playing, singing and producing reggae music since the nineteen sixties. The only other reggae musician in the Rock and Roll Hall of Fame is the other major reggae star, Bob Marley.

Jimmy Cliff and his music starred in the nineteen seventy-two Jamaican film, "The Harder They Come." We leave you with Cliff performing a song from that soundtrack. Here is "Many Rivers to Cross."

DOUG JOHNSON: I'm Doug Johnson. Our program was written by Kim Varzi and Caty Weaver, who was also the producer. For transcripts, MP3s and podcasts of our programs, go to 51voa.com.

Do you have a question about America? Click Contact Us at the bottom of our Web site. Or write to mosaic@voanews.com. We may answer your question on our show.