Short Story: ‘The Law of Life’ by Jack London

Update Required To play the media you will need to either update your browser to a recent version or update your Flash plugin.
By Jack London
2010-2-26 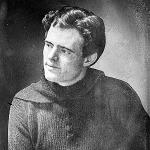 Our story today is called "The Law of Life."  It was written by Jack London. Here is Shep O'Neal with the story.

SHEP O'NEAL:  The old Indian was sitting on the snow. It was Koskoosh, former chief of his tribe. Now, all he could do was sit and listen to the others. His eyes were old.  He could not see, but his ears were wide open to every sound.

"Aha." That was the sound of his daughter, Sit-cum-to-ha.  She was beating the dogs, trying to make them stand in front of the snow sleds.  He was forgotten by her, and by the others, too. They had to look for new hunting grounds. The long, snowy ride waited. The days of the northlands were growing short. The tribe could not wait for death. Koskoosh was dying.

The stiff, crackling noises of frozen animal skins told him that the chief's tent was being torn down. The chief was a mighty hunter. He was his son, the son of Koskoosh.  Koskoosh was being left to die.

As the women worked, old Koskoosh could hear his son's voice drive them to work faster. He listened harder. It was the last time he would hear that voice. A child cried, and a woman sang softly to quiet it. The child was Koo-tee, the old man thought, a sickly child. It would die soon, and they would burn a hole in the frozen ground to bury it. They would cover its small body with stones to keep the wolves away.

"Well, what of it? A few years, and in the end, death. Death waited ever hungry. Death had the hungriest stomach of all."

Koskoosh listened to other sounds he would hear no more: the men tying strong leather rope around the sleds to hold their belongings; the sharp sounds of leather whips, ordering the dogs to move and pull the sleds.

"Listen to the dogs cry. How they hated the work."

They were off.  Sled after sled moved slowly away into the silence. They had passed out of his life.  He must meet his last hour alone.

"But what was that?" The snow packed down hard under someone's shoes. A man stood beside him, and placed a hand gently on his old head. His son was good to do this. He remembered other old men whose sons had not done this, who had left without a goodbye.

His mind traveled into the past until his son's voice brought him back.  "It is well with you?" his son asked. And the old man answered, "It is well."

"The tribesmen hurry. Their loads are heavy and their stomachs flat from little food. The way is long and they travel fast. I go now. All is well?"

"It is well. I am as last year's leaf that sticks to the tree. The first breath that blows will knock me to the ground. My voice is like an old woman's. My eyes no longer show me the way my feet go. I am tired and all is well."

He lowered his head to his chest and listened to the snow as his son rode away. He felt the sticks of wood next to him again. One by one, the fire would eat them.  And step by step, death would cover him. When the last stick was gone, the cold would come. First, his feet would freeze. Then, his hands. The cold would travel slowly from the outside to the inside of him, and he would rest. It was easy...all men must die.

He felt sorrow, but he did not think of his sorrow.  It was the way of life.  He had lived close to the earth, and the law was not new to him.  It was the law of the body.  Nature was not kind to the body.  She was not thoughtful of the person alone.  She was interested only in the group, the race, the species.

This was a deep thought for old Koskoosh. He had seen examples of it in all his life. The tree sap in early spring; the new-born green leaf, soft and fresh as skin; the fall of the yellowed, dry leaf. In this alone was all history.

He placed another stick on the fire and began to remember his past. He had been a great chief, too. He had seen days of much food and laughter; fat stomachs when food was left to rot and spoil; times when they left animals alone, unkilled; days when women had many children.  And he had seen days of no food and empty stomachs, days when the fish did not come, and the animals were hard to find.

For seven years the animals did not come. Then, he remembered when as a small boy how he watched the wolves kill a moose. He was with his friend Zing-ha, who was killed later in the Yukon River.

Ah, but the moose. Zing-ha and he had gone out to play that day.  Down by the river they saw fresh steps of a big, heavy moose.  "He's an old one," Zing-ha had said.  "He cannot run like the others. He has fallen behind. The wolves have separated him from the others. They will never leave him."

Zing-ha and he had felt the blood quicken in their bodies. The end would be a sight to see.

They had followed the steps of the moose and the wolves.  Each step told a different story.  They could see the tragedy as it happened: here was the place the moose stopped to fight.  The snow was packed down for many feet. One wolf had been caught by the heavy feet of the moose and kicked to death.  Further on, they saw how the moose had struggled to escape up a hill.  But the wolves had attacked from behind.  The moose had fallen down and crushed two wolves. Yet, it was clear the end was near.

The snow was red ahead of them. Then they heard the sounds of battle.  He and Zing-ha moved closer, on their stomachs, so the wolves would not see them.  They saw the end. The picture was so strong it had stayed with him all his life.  His dull, blind eyes saw the end again as they had in the far off past.

For long, his mind saw his past. The fire began to die out, and the cold entered his body.  He placed two more sticks on it, just two more left. This would be how long he would live.

It was very lonely. He placed one of the last pieces of wood on the fire.  Listen, what a strange noise for wood to make in the fire.  No, it wasn't wood.  His body shook as he recognized the sound...wolves.

The cry of a wolf brought the picture of the old moose back to him again.  He saw the body torn to pieces, with fresh blood running on the snow.  He saw the clean bones lying gray against the frozen blood.  He saw the rushing forms of the gray wolves, their shinning eyes, their long wet tongues and sharp teeth.  And he saw them form a circle and move ever slowly closer and closer.

A cold, wet nose touched his face.  At the touch, his soul jumped forward to awaken him. His hand went to the fire and he pulled a burning stick from it.  The wolf saw the fire, but was not afraid.  It turned and howled into the air to his brother wolves. They answered with hunger in their throats, and came running.

The old Indian listened to the hungry wolves.  He heard them form a circle around him and his small fire.  He waved his burning stick at them, but they did not move away.  Now, one of them moved closer, slowly, as if to test the old man's strength.  Another and another followed.  The circle grew smaller and smaller.  Not one wolf stayed behind.

Why should he fight?  Why cling to life?  And he dropped his stick with the fire on the end of it.  It fell in the snow and the light went out.

The circle of wolves moved closer. Once again the old Indian saw the picture of the moose as it struggled before the end came.  He dropped his head to his knees. What did it matter after all?  Isn't this the law of life?

FAITH LAPIDUS: You have just heard the American story "The Law of Life."  It was written by Jack London. Your storyteller was Shep O'Neal.  Listen again next week for another American story in V.O.A. Special English. I'm Faith Lapidus.