Update Required To play the media you will need to either update your browser to a recent version or update your Flash plugin.
By Jeri Watson and Caty Weaver
2011-10-27 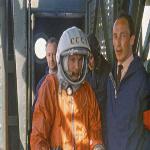 Photo: AP
In this April 12 1961 photo, rocket engineer Oleg Ivanovsky, right, leads Yuri Gagarin, center, to the Vostok spacecraft on which he will become the first person in space

I'm Doug Johnson. Today we hear new music from Coldplay. And we answer a question about Halloween.

But first, we go to the Adler Planetarium in Chicago where museum officials are honoring Russia's former cosmonaut Yuri Gagarin.

DOUG JOHNSON: The Adler Planetarium in Chicago, Illinois has honored Russian cosmonaut Yuri Gagarin. He was the first person to travel to space. He made the flight April twelfth, nineteen sixty one. Now, fifty years later, the Adler Planetarium is celebrating with a new sculpture of the man. Christopher Cruise has more.

CHRISTOPHER CRUISE: Yuri Gararin made history with the Russian spacecraft Vostok 3Ka. It was the vehicle he flew on that dangerous trip to outer space. At the same time, Gagarin became the first man to orbit the Earth.

Russian officials in Moscow donated the Gagarin sculpture to Chicago. It will become a permanent exhibit at the Adler Planetarium. The planetarium opened in nineteen thirty, the country's first museum of astronomy.

The Adler has always honored scientific gains made by the American astronomy community. But now the museum is working to honor astronomical achievements made by other nations as well.

Former Romanian cosmonaut Dumitru-Dorin Prunariu attended the ceremony to honor Yuri Gagarin. Twenty years after he became the first man in space, Mister Prunariu flew to space on a Soyuz rocket. That was in nineteen eighty one. He remains Romania's only cosmonaut.

Mister Prunariu was eight year old when Gagarin made the flight. He remembers the moment he heard about it.

DUMITRI-DORIN PRUNARIU: "I was in ((the)) house together with my sister and mother listening to the radio. And the radio stopped and very important news was translated about the flight of the first human into outer space... "

Mr. Prunariu praises the cosmonaut for helping him find his own path to space.

DUMITRI-DORIN PRUNARIU:? "Yuri Gagarin showed us how to break frontiers, the frontier of the atmosphere."

Mr. Prunariu is now chairman of the United Nations Committee on the Peaceful Uses of Space.

James Andrews is a Russian history expert at Iowa State University in Ames, Iowa. He says Gagarin's flight shocked Americans, coming just three and a-half years after the Soviets launched the Sputnik satellite. But America soon stole the world's attention with its Earth orbits and trips to the moon.

JAMES ANDREWS: "We seem to forget that Gagarin's flight in nineteen sixty one was so important. There were these monumental event that happened after Sputnik. And I think we need to remember how important that was and how heroic, as well."

The president of Adler Planetarium is Paul Knappenberger. He says, in the past, the Adler had not really shown what other nations, including the Soviet Union, were doing in space. But he said, "that is something we are working on now."

Mr. Knappenberger says the Adler is expanding. He says plans include a new building. He said the new space will feature the history of space exploration by Americans and Soviets. But he also said it also show current, international activity connected to space travel. He said the private industry now involved in space flight will also be included.

DOUG JOHNSON: Our question this week comes from China. Guo Ming asks about the history and events of Halloween.

Halloween is always celebrated on October thirty-first. On that night, many people will look like frightening creatures such as vampires or ghosts. They do this with the help of special clothing and face paint.

Halloween traditions developed from Celtic beliefs in ancient Britain. The Celts believed that spirits of the dead would return to their homes on October thirty-first, the day of the autumn feast. They built huge fires to frighten away evil spirits released with the dead on that night.

People from Scotland and Ireland brought these ideas with them when they came to America. Some believed that spirits played tricks on people on the last night of October.

Historians say many of the Halloween traditions of today developed from those of ancient times. They say that burning a candle inside a hollow pumpkin recalls the fires set many years ago in Britain. And they say that wearing a mask to hide a person's face is similar to the way ancient villagers covered their faces to force evil spirits away. 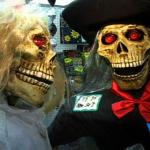 On Halloween night, American children put on masks and other clothing. They go from home to home shouting "Trick or treat"! If the people in the homes do not give them a treat, the children may play a trick on them.

Some adults put on costumes and attend Halloween parties. They also decorate their homes. They might clean out the insides of pumpkins and cut funny faces on the surface. They, they place the burning candle inside. Some hang fake bats, spider webs and other things around the home.

The National Retail Federation is predicting that Americans will spend more on Halloween treats and products this year. The group says about six point nine billion dollars will be spent in all. That is eighteen percent more than last year when Americans spent five point eight billion dollars to celebrate Halloween.

The National Retail Federation also has information about what Americans will be wearing for Halloween this year. It says zombie costumes are tops among women, men and children. More than two point six million Halloween celebrants will dress as the undead.

DOUG JOHNSON: Coldplay has just released its fifth album. "Mylo Xyloto" is what music critics call a concept album. It is about two young people in love. But the forces of the modern world work against them. Katherine Cole has more.

KATHERINE COLE: The lead singer of Coldplay, Chris Martin, told Billboard, that the new album was meant to be out of any musical kind of box. He said producer Brian Eno pushed the group to "go anywhere" with the music. Rolling Stone magazine described "Mylo Xyloto" as a mix of Eno's "Enoxification" and the heart of Coldplay's own style. But, the first single released sounds a lot like other Coldplay hits. Here is "Every Teardrop is a Waterfall." 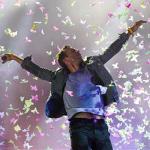 The four members of Coldplay have been together for fifteen years now. Some critics say the British band's music is uninventive and unimaginative. But, Coldplay got big fast. Its first huge hit, "Yellow" was on the band's first album, "Parachutes," released in two thousand. Since then Coldplay has sold more than fifty million albums. On "Mylo Xyloto" the band performs with the singer Rihanna on "Princess of China."

Chris Martin told Billboard that "Mylo Xyloto" would "have a happy ending." We leave you with a song that seems to represent what the singer meant. Here is Coldplay with "Paradise" from the new album "Mylo Xyloto."