An Air Show for Showing Off; West Bank's Speed Sisters

Update Required To play the media you will need to either update your browser to a recent version or update your Flash plugin.
By Kane Farabaugh and Leslie Hollis
2010-7-29 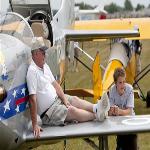 Photo: AP
Lanny Rundell of Winnsboro, Louisiana. and his grandson Cole Uffman take a rest on their plane last year at the Experimental Aircraft Association's AirVenture in Oshkosh, Wisconsin

Ron Wagner is from the Experimental Aircraft Association, which holds the event each year.

RON WAGNER: "Nearly every major manufacturer is represented and a lot of minor, smaller ones."

Visitors can find everything from old passenger planes to new unmanned aircraft, like the Predator drone.

But Ron Wagner says the spirit of the event is best represented by the pilots and engineers who build their own aircraft.

RON WAGNER: "Much of the modern innovation has come from the home builder community. We are really and truly very fortunate here in the United States. We have a lot of freedom to build and design airplanes for our own use and build them and fly them."

AirVenture ends Sunday in the American Midwest. This year there is greater interest in electric-powered aircraft.

But if you are more interested in fast cars, here is a new turn in the world of motorsports. 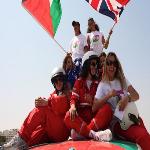 Members of the Speed Sisters

The Speed Sisters are a racing a team of eight Palestinian women in the West Bank. The team is a dream come true for Suna Aweidah, the captain.

But not everyone was happy to see her in the driver's seat of the BMW race car she drives.

In June, the Speed Sisters became the first all-female racing team to compete in the Speed Test, a popular race in the West Bank. They faced some mechanical problems. But one of them finished in the top ten.

The team includes Muslims and Christians, mothers, a librarian, a business student and a woman who competed in a beauty pageant. Two of the drivers were born into racing families.

The Speed Sisters received money from the British Consulate in Jerusalem to buy a race car. They also received driving lessons and guidance from two British women in motorsports, Helen Elstrop and Sue Sanders.

Ms. Sanders says she knew right away they had the drive to succeed.

SUE SANDERS: "When Suna particularly said to me 'I really want to be best,' it was just such an instant affinity. And it really didn't matter whether we had the same language or the same culture, but we actually had the same passion and the same desires to achieve things."

And that's the VOA Special English Economics Report, with reporting by Kane Farabaugh and Leslie Hollis. Transcripts, MP3s and podcasts of our reports are at 51voa.com. I'm Steve Ember.