Update Required To play the media you will need to either update your browser to a recent version or update your Flash plugin.
By Dana Demange
2010-9-4 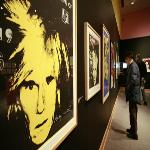 Photo: AP
Andy Warhol was much more than just a painter. He was also a film maker, publisher, and manager of a rock band.

BARBARA KLEIN: And I'm Barbara Klein with PEOPLE IN AMERICA in VOA Special English. Today we tell about Andy Warhol, one of the most influential people in American modern art. Warhol was best known for his bright colored images of famous people and food cans. Through both his art and lifestyle he explored the nature of fame, popular culture, and the media. His artistic influence and unusual personality redefined the modern art world.

STEVE EMBER: Andy Warhol was not always famous around the world. He was born in nineteen twenty-eight in Pittsburgh, Pennsylvania. His parents were immigrants from Czechoslovakia. Their last name was Warhola, which Andy later shortened to Warhol. As a child Andy spent a great deal of time sick in bed. While he was recovering, he would draw pictures. When his father died, he left enough money for Andy to attend art school.

Andy Warhol attended the Carnegie Institute of Technology where he studied pictorial design. Pictorial design is the art of creating images and drawings. Often these drawings are used in the production of advertisements and magazines.

BARBARA KLEIN: In nineteen forty-nine Warhol moved to New York City to work as a commercial artist. He drew pictures for magazines and advertisements. He became very successful. During the nineteen fifties Warhol drew images for many important magazines such as "Vogue" and "Harper's Bazaar." He also became very well known for a series of ads he made for shoes. Warhol used his experience in commercial art as an entry into fine art. He began his painting career as part of the Pop Art movement. This movement was at its strongest during the nineteen sixties. 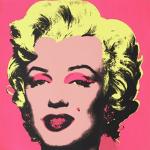 STEVE EMBER: Pop Art was defined by images of material goods and popular culture. Pop artists rejected the serious nature of the art world. To do this, these artists painted or printed everyday images of things that usually are not considered art. These images included photographs from magazines, drink advertisements and drawings from popular comic strips.

BARBARA KLEIN: Some critics say that Pop Art was a reaction to Abstract Expressionism. Artists of the Abstract Expressionist movement took themselves very seriously. They did not approve of popular culture. They thought artists should not be concerned with such unimportant parts of culture. Pop artists, however, celebrated popular culture in all of its forms. They approved of using mass media and mass production as an influence in their art. Pop Art also reflected the rise in wealth and the importance of owning things that America experienced in the nineteen fifties. One art critic defined Pop art as popular, low-cost, young, mass-produced and sexy.

STEVE EMBER: One of Warhol's first exhibits was in nineteen sixty-two. He created thirty-two paintings of red and white soup cans. These paintings shook the art world. The soup cans looked like the soup produced by one of America's most popular food companies, Campbell's. Every painting looked the same except for the words written on the can that described the different kinds of soup.

Warhol used a very smooth painting method so the artwork almost did not look hand-made. The paintings looked like they came out the same factory that made the soup cans. No one had ever seen art like this. Warhol also made paintings using images such as Coca Cola bottles, dollar symbols, and popular cleaning products. He took the most everyday objects and turned them into fine art.

BARBARA KLEIN: Warhol soon started making silk-screen prints. This method of reproduction permitted the artist to make many images very quickly. He would often repeat the same picture many times in one artwork. He liked the idea of mass produced art. He once said that he thought everyone should think alike and be like a machine. In fact, the place where he created his art was called The Factory. He had many assistants who helped him produce his art.

STEVE EMBER: Warhol explored many other subjects. For example, he made a series of paintings on death and disaster. These works showed images of car accidents and executions. He also made pictures of famous people such as the actress Marilyn Monroe and the singer Elvis Presley. Warhol was very interested in fame. He celebrated famous people and they celebrated him.

BARBARA KLEIN: Andy Warhol once said something about fame that became very popular and is still repeated today. He said that in the future, everybody will be famous for fifteen minutes. Warhol certainly enjoyed being well known. He created a very unusual public personality. He would wear strange wigs on his head made of white hair. He would go out every night to parties and other social gatherings where there were beautiful and important people. He would talk to reporters in a very shy manner. Often he would provide unclear answers to their questions. Here is a recording of Andy Warhol being asked about his art. It is from a nineteen ninety-one documentary film about Warhol's life. 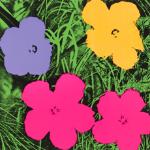 Andy Warhol was also well known for his many flower paintings.

QUESTION: "Andy, do you think that pop art has sort of reached the point where it's becoming repetitious?"

QUESTION: "Do you think it should break away from being pop art?"

QUESTION: "Are you just going to carry on?"

STEVE EMBER: Andy Warhol was much more than just a painter. He was also a film maker, publisher, and manager of a rock band. For example, he produced several low budget art films in the early nineteen sixties. One was called "Empire". It showed a filmed image of the Empire State Building in New York City. The film was eight hours long. In the movie "Sleep" Warhol recorded a friend sleeping. The film lasts six hours. When asked about the uneventful nature of these films, Warhol answered that he liked boring or uninteresting things.

BARBARA KLEIN: In the middle nineteen sixties Warhol also managed a rock band called The Velvet Underground. He helped produce one of their records and designed the cover of the album.

Another of Warhol's projects was the creation of "Interview" magazine. This magazine covered many kinds of American popular culture. Andy Warhol was able to interview the kinds of people he liked best, famous people. A colorful drawing of a famous person was on the cover of every issue of the magazine. The image was drawn in the style of Warhol's paintings.

STEVE EMBER: In nineteen sixty-eight Andy Warhol was shot by a woman who had been in one of his films. Valerie Solanas was angry with Warhol for not making a movie based on a play she wrote. The bullet from the gun hit several of Warhol's organs and almost killed him. The media's reaction to this event made him even more famous.

BARBARA KLEIN: Even though he worked on many other projects, Andy Warhol always kept producing artwork. In the nineteen seventies he made millions of dollars painting people's portraits. Wealthy people all over the world paid a great deal of money to have him paint their picture. In the nineteen eighties Warhol worked with several younger artists. They included Jean Michel Basquiat and Keith Haring. Warhol also wrote several books and created two cable television programs. 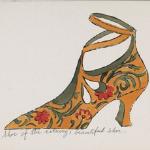 His pop art was defined by images of material goods and popular culture.

STEVE EMBER: Warhol's art would have surely continued in many new directions. But he died as a result of problems after a minor operation in nineteen eighty-seven. He was fifty-eight years old. At his death, Warhol's total estimated worth was more than one hundred million dollars. Most of this money helped create the Andy Warhol Foundation which helps support the visual arts.

BARBARA KLEIN: In nineteen ninety-four the Andy Warhol Museum opened in Pittsburgh, Pennsylvania. This museum is in a large industrial building. As you walk up the seven floors of the museum, you can see more than five hundred works of art by Warhol. The museum has pieces from every period of his career.

STEVE EMBER: On the fourth floor there is a permanent exhibit called Silver Clouds. This room is based on an art gallery show that Warhol designed in nineteen sixty-six. The room is filled with many silver colored balloons that are square shaped. The balloons contain helium and oxygen so that they float around with the air currents. Warhol's idea was to create a joyful and magical room in which the artwork moved around the visitors.

BARBARA KLEIN: Andy Warhol helped change the way the world defined modern art. His colorful Pop Art images and unusual personality made him one of the most famous and important people in American art and culture.