Update Required To play the media you will need to either update your browser to a recent version or update your Flash plugin.
By VOA
2010-10-6 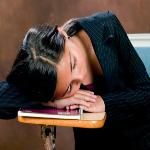 Photo: jupiterimages.com
Surveys find that half of American teenagers are missing an average of up to 1? hours of sleep every school night

Surveys of American teenagers find that about half of them do not get enough sleep on school nights. They get an average of sixty to ninety minutes less than experts say they need.

One reason for this deficit is biology. Experts say teens are biologically programmed to go to sleep later and wake up later than other age groups. Yet many schools start classes as early as seven in the morning.

As a result, many students go to class feeling like sixteen-year-old Danny. He plays two sports, lacrosse and football. He is an active teen -- except in the morning.

DANNY: "Getting up in the morning is pretty terrible. I'm just very out of it and tired. And then going to school I'm out of it, and through first and second period I can barely stay awake."

Michael Breus is a clinical psychologist with a specialty in sleep disorders.

MICHAEL BREUS: "These aren't a bunch of lazy kids -- although, you know, teenagers can of course be lazy. These are children whose biological rhythms, more times than not, are off."

Teens, he says, need to sleep eight to nine hours or even nine to ten hours a night. He says sleepy teens can experience a form of depression that could have big effects on their general well-being. It can affect not just their ability in the classroom but also on the sports field and on the road.

Michael Breus says any tired driver is dangerous, but especially a teenager with a lack of experience.

So what can schools do about sleepy students? The psychologist says one thing they can do is start classes later in the morning. He points to studies showing that students can improve by a full letter grade in their first- and second-period classes.

Eric Peterson is the head of St. George's School in the northeastern state of Rhode Island. He wanted to see if a thirty-minute delay would make a difference. It did.

He says visits to the health center by tired students decreased by half. Late arrivals to first period fell by a third. And students reported that they were less sleepy during the day.

Eric Peterson knows that changing start times is easier at a small, private boarding school like his. But he is hopeful that other schools will find a way.

ERIC PETERSON: "In the end, schools ought to do what's the right thing for their students, first and foremost."

Patricia Moss, an assistant dean at St. George's School, says students were not the only ones reporting better results.

PATRICIA MOSS: "I can say that, anecdotally, virtually all the teachers noticed immediately much more alertness in class, definitely more positive mood. Kids were happier to be there at eight-thirty than they were at eight."

And that's the VOA Special English Education Report. You can read, listen and comment on our programs at 51voa.com. We're also on Facebook and Twitter at VOA Learning English. I'm Bob Doughty.