At the Vatican, Some of the World's Greatest Art

Update Required To play the media you will need to either update your browser to a recent version or update your Flash plugin.
By Jerilyn Watson
2012-4-17 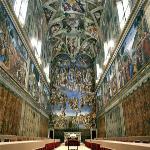 Photo: AP
The Sistine Chapel at the Vatican

MARIO RITTER: And I'm Mario Ritter with EXPLORATIONS in VOA Special English. The Vatican in Rome is the world headquarters of the Roman Catholic Church. But the Vatican is more than a religious and administrative center. Over the centuries, church leaders gathered priceless objects including books, documents, paintings and sculptures. Come with us now as we join the millions of people who explore the Vatican Museums every year.

FAITH LAPIDUS: As you enter the Vatican Museums, you pass through large sculptured doors. When the light shines just the right way, bronze squares in the doors seem to catch fire. The artist Cecco Bonanotte created the doors in nineteen ninety-nine. He produced them for the opening celebration of the new entrance to the Vatican Museums in two thousand. But other works here are much older.

There are vases and jars with beautiful artwork created more than two thousand years ago. Statues and paintings show heroes of ancient Troy and Athens. Paintings and cloth textiles reproduce the world of the sixteenth century.

Sometimes experts remove objects to repair them. And some objects may be loaned temporarily to other museums. But there are always many interesting and beautiful objects to see at the Vatican Museums.

MARIO RITTER: If you ever wanted to visit all the Vatican collections in a day, you would have to run. And you would still not really see much of anything. There are, after all, more than twenty museums and public art centers. Today we tell about a few of the most interesting works of art.

The Gallery of the Maps is a good place to start. Forty walls have maps of the world as Italians believed it looked like in the sixteenth century. Ignazio Danti of Perugia painted the maps in the fifteen hundreds.

FAITH LAPIDUS: Another museum, the Gallery of the Tapestries, tells picture stories in wall hangings. These tapestries are made of two materials: silk and wool. They were designed from drawings by the artist Raphael and possibly his students.

Works by Raphael deeply influenced painters of the Italian Renaissance. The period represented a rebirth of artistic development. There are more works by Raphael in other Vatican areas.

But on this visit, a border tapestry by Flemish artist Pieter van Aelst picturing the four seasons captures your interest. The artist represents spring with two young people in love. A woman holding wheat is summer. Van Aelst sees fall as small boys climbing grape vines. The image of a seated person almost fully hidden by clothing captures the cold and loneliness of winter.

MARIO RITTER: Roman Catholic Church leaders established several of the Vatican Museums during the eighteenth and nineteenth centuries. In eighteen thirty-nine, Pope Gregory the Sixteenth established the Vatican Egyptian Museum. Objects created long ago fill its nine rooms. The artworks were found in and around Rome. They had been brought from Egypt.

Pope Gregory the Sixteenth established the Etruscan Museum in eighteen thirty-seven. The collection includes vases and objects made of bronze and gold. It also includes statues of full human bodies and sculptures representing heads. In addition, you can see objects that added beauty to the Etruscan temples, or religious centers.

MARIO RITTER: Next we visit the Chiaramonti Museum, established by Pope Pius the Seventh. The pope's name was Chiaramonti before he was chosen to lead the church. This museum has almost one thousand ancient works of art, including statues of Roman gods.

The Chiaramonti Museum is sometimes closed to the public. But when inside, you can see a statue called "Augustus of Prima Porta." The Roman ruler holds his right arm high in the air. Art experts say the Emperor Augustus was making a victory sign. Or, the statue may have once held a weapon. The statue was found in eighteen sixty-three in the ancient home of Livia, the wife of Augustus.

FAITH LAPIDUS: Now we are in the Pio-Clementine Museum, founded by Pope Clement the Fourteenth in seventeen seventy. It is filled with Greek and Roman sculptures. One interesting statue is the Laocoon. The subject of the statue is from the "Aeneid" by Virgil, the most famous poet of ancient Rome.

The poem is about the ancient war between Greece and Troy. The sculpture shows the Trojan priest Laocoon and his sons being crushed to death by sea snakes. The artists have made the terrible pain of the dying man and boys look very real.

MARIO RITTER: Some visitors believe the works of Raphael are the most beautiful in the Vatican Museums. In fifteen-oh-eight, Pope Julius the Second asked Raphael to cover the walls and ceiling of some of the Pope's private living areas.

One of Raphael's most famous paintings is "The School of Athens." It shows famous Greek thinkers and scientists. Raphael painted these people teaching and gathered around the philosophers Plato and Aristotle.

Some experts say Raphael painted the image of the artist Michelangelo into this work. That may be true. Michelangelo was clearly in Raphael's thoughts at times. In a way, the two men competed. Pope Julius probably understood that the competition incited each man to the height of his greatness.

Julius so liked the work of Raphael that he told the artist to remove earlier paintings in the Pope's living areas. But Raphael understood the value of the work of others. He saved the work of great artists including Perugino.

FAITH LAPIDUS: We have saved the best for last. We enter the Sistine Chapel -- the official private church of the popes. It is the most famous part of the Vatican Museums. Pope Sixtus the Fourth had it built in the fourteen seventies.

Major events involving Roman Catholic Church leaders take place in the Sistine Chapel. For example, in April of two thousand five, top church officials held a historic meeting in this center for prayer. They chose a new pope, Benedict the Sixteenth. But the chapel also is home to some of the finest paintings ever created.

MARIO RITTER: On the side walls are paintings by the greatest Italian artists. But when we enter the Sistine Chapel, we look up to see the most beautiful ceiling in the world. In fifteen-oh-eight, Pope Julius the Second asked Michelangelo to paint the ceiling of the Sistine Chapel. The result was a series of paintings called "The Creation of the Universe" and the "History of Humanity."

The ceiling is an artistic wonder. Michelangelo produced more than fifty paintings that show more than three hundred people. The paintings show God creating Adam, the first man. They also show stories from Christianity's holy book, the Bible. It took Michelangelo four years to paint the ceiling. He painted it while lying on his back.

In the fifteen thirties, Pope Paul the Third asked Michelangelo to paint the wall of the Sistine Chapel above the altar. This is the structure where religious ceremonies are performed. Between fifteen thirty-six and fifteen forty-one, Michelangelo painted "The Last Judgment."

FAITH LAPIDUS: This huge painting includes three hundred people. Christ is shown as the judge of good and evil. The painting shows some good people rising to heaven. But other people are condemned.

They are shown falling or being forced by ugly creatures into hell, where they are tortured forever. Some people find this work beautiful. Others find it frightening.

But almost everyone agrees that ceiling of the Sistine Chapel and the "Last Judgment" are the most famous works of art ever created.

MARIO RITTER: Now it is time to come back to the world of the twenty-first century. There are many other wonderful works in the Vatican Museums. But they will still be there on another day, and many days to come.

FAITH LAPIDUS: This program was written by Jerilyn Watson. I'm Faith Lapidus with Mario Ritter who was also our producer. Join us next week for another EXPLORATIONS in VOA Special English.