Update Required To play the media you will need to either update your browser to a recent version or update your Flash plugin.
By Mike DeFabo, Jim Tedder and Jerilyn Watson
2010-9-27 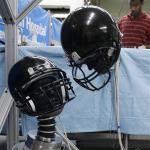 KATHERINE COLE: This is SCIENCE IN THE NEWS, a program in VOA Special English. I'm Katherine Cole.

KATHERINE COLE: American researchers are urging athletes to take head injuries seriously. Their comments come after tests showed that a football player suffered serious brain damage from repeated blows to the head. Chris Henry played five years with the Cincinnati Bengals of the National Football League. He died last December when he either fell or jumped from a truck.

Researchers reported in June that Chris Henry had a serious kind of brain damage. It is called chronic traumatic encephalopathy, or C-T-E.

Doctors believe that each hit to the head causes a harmful protein to build up in the brain. This causes the inside of neurons to become tangled together, similar to what doctors find in patients with Alzheimer's disease. Other studies have linked C-T-E to dementia, depression and memory loss. The condition also is sometimes linked to drug and alcohol use.

BOB DOUGHTY: The death of Chris Henry is something of a mystery. He was arguing with his girlfriend before he died. It is unclear whether he fell from the vehicle or jumped on purpose. Tests show that more than fifty former athletes had C-T-E. However, doctors are unable to confirm its presence until after the person dies.

In the past, researchers believed that the only cause of C-T-E was a concussion. Chris Henry, for example, never missed a game with the Bengals or in college because of a concussion. This means one of two things. Either he hid the problem from his trainers and coaches. Or less severe hits can lead to C-T-E.

Researchers say his death should be a warning to other athletes. Concussions are not like most injuries. They can become life-threatening, but cannot be seen.

KATHERINE COLE: America's Centers for Disease Control and Prevention receives reports of about four million sports-related concussions every year. Concussions can result when an athlete is hit in the head. The brain will move around and sometimes strike the skull, or bony inside of the head. This can result in swelling. In extreme cases, it causes bleeding in the brain.

After suffering a concussion, a player might feel light-headed and pass out. He or she may also have problems with memory and feel sick to the stomach. Researchers are not saying that no one should play contact sports. They just want athletes to know that head injuries are serious. And, repeated head injuries are cause for concern.

The best thing to do is seek medical attention. This way doctors can document the injury before it becomes too late.

BOB DOUGHTY: American teenagers hear it all the time from their parents. "Are you listening to me? Turn down that music or you will hurt your ears." A new study has found the parents may be right. The Journal of the American Medical Association published results of the study last month. 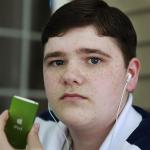 Matthew Brady, 17, of Foxborough, Massachusetts has some mild hearing loss from listening to loud music on his earphones

They found that boys are more likely to have hearing problems than girls. The researchers say that teenagers from poor families had more hearing loss than those from more wealthy families. The age or race of the teens who were tested had no effect on their chances for hearing loss.

BOB DOUGHTY: The researchers say they are not sure why some teenagers are losing their hearing. Not enough studies have been done and more are needed. Some say the causes may be found in their diet, exposure to poisons, or in their genes. Others believe that listening to loud music on mp3 players with earphones is the major cause.

Researchers think that some teenagers do not realize that they are listening to music at very loud levels. To them, loud rock music may seem normal.

KATHERINE COLE: Ron Eavey is head of the Department of Otolaryngology at the Vanderbilt Bill Wilkerson Center. He says that parents should stand next to their children while they are wearing earphones. If the parents can hear the music, the sound is too loud. He says that teenagers should set the volume control on their music players to somewhere between one-half and two-thirds the highest level, never louder.

Even a small hearing loss can affect a child's social development. Communication skills and grades in school can also suffer. Doctor Eavey says, "What we're seeing is a big jump in the prevalence of hearing loss in a very short time, in less than one generation."

BOB DOUGHTY: Finally, an international study has shown that scientists in Denmark are the happiest with their work. The journal "Nature" published the findings.

More than ten thousand five hundred scientists rated their satisfaction with issues like their pay, health care and retirement plan. Sixteen countries provided large enough sample sizes for study organizers to comment on the findings. They said Denmark seems to be the most likely place for a fine research experience. Other countries where scientists seemed happiest were the Netherlands, Sweden, France and Switzerland.

KATHERINE COLE: In the study, those questioned rated themselves. One area they judged was the amount of independence they had in their work. They also rated the guidance they received from other workers and more experienced researchers. The scientists said they found those qualities the most important to their happiness.

Those who took part in the study work for government or private laboratories, businesses and educational centers. The study showed a big difference between money paid to scientists in private industry as compared with universities. Those in private industry received much more.

Scientists in Japan who answered the study expressed the least satisfaction. Only a small percentage said they were very satisfied. Two percent thought their retirement plan was good. Just ten percent thought they had enough independence to do their work.

BOB DOUGHTY: Scientists in India and China also reported low levels of job satisfaction. Still, more of these scientists than those from other countries noted improved work satisfaction during the past year. The journal "Nature" reported that India and China are now spending more money for research. In two thousand seven, China had as many researchers as the European Union or the United States.

America's National Science Foundation noted the number of Chinese studying engineering and natural sciences. It said they complete almost as many doctoral degree programs as students in the United States.

KATHERINE COLE: Mohamed H.A. Hassan is president of the African Academy of Sciences in Nairobi, Kenya. He noted fast-increasing wages for scientists in China, India and Brazil. He said countries where wages for scientists are increasing are the same places where job satisfaction is increasing. He said one simple message of the study is, pay them and they will stay.

Mister Hassan noted that scientists are not wealthy. But he said they are well-paid in places where science is important.

BOB DOUGHTY: An American psychological expert commented on study results involving women. The study found that, six to ten years after receiving doctoral degrees, women scientists are paid less than men. And, this difference in pay widens over time.

Kathleen Christensen directs the Workplace, Work Force and Working Families program at the Alfred P. Sloan Foundation in New York. She questioned why women stay in lower positions although they have skills to deal with more responsibility. She also questioned whether women are getting better jobs, but earning less for the same level of work as men. She said there is proof for both possibilities.

KATHERINE COLE: This SCIENCE IN THE NEWS was written by Mike DeFabo, Jim Tedder and Jerilyn Watson. June Simms was our producer. I'm Katherine Cole.

BOB DOUGHTY: And, I'm Bob Doughty. Listen again next week for more news about science in Special English on the Voice of America.