Bahrain and Belarus Added to an ‘Enemies of the Internet' List

Update Required To play the media you will need to either update your browser to a recent version or update your Flash plugin.
By June Simms
2012-3-25 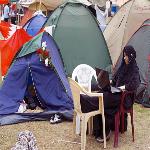 This is the VOA Special English Technology Report. A media rights group has added Bahrain and Belarus to its list of countries with the most restrictions on Internet freedom. At the same time, the group removed Libya and Venezuela from a list of countries considered under surveillance.

Reporters Without Borders released its latest "Enemies of the Internet" report earlier this month.

This year's report also notes the importance of the Internet and social networks in the Arab Spring protest. It says social media like Facebook and Twitter have been firmly established as tools for protests and vehicles for freedom.

The group identifies twelve countries as "Enemies of the Internet." Among them are Burma, China, Cuba, Iran and North Korea. The list also includes Saudi Arabia, Syria, Turkmenistan, Uzbekistan and Vietnam.

Bahrain and Belarus are the newest additions to the list. Reporters Without Borders says Bahrain used repressive measures to block news and information after unrest began in the Arab world last year. The group says the government has used a combination of methods to suppress the opposition. These include keeping international media away from the country, arresting bloggers and harassing human rights activists.

Delphine Halgand heads the Reporters Without Borders office in Washington. She says Bahrain has a highly developed system for watching and blocking online communications. She says the country has increasingly used these systems against  political opposition.

DELPHINE HALGAND: "The authorities in Bahrain were able to arrest bloggers and netizens for what they are publishing online. And actually even one of these people died when he was in detention."

Zakariya Rashid Hassan, was arrested and accused of inciting hatred. The group says he was charged with disseminating false news and calling for the ouster of Bahrain's rulers. Mister Hassan died on April ninth. Two officers have been accused of beating him to death.

Reporters Without Borders says several other bloggers and activists have suffered repeated physical attacks and have been discredited by the government.

As for Belarus, Ms. Helgand says its government has increasingly blocked websites.

DELPHINE HALGAND: "The lists of the websites which are inaccessible in the country are becoming bigger and bigger. And even some news websites or opposition websites were attacked."

And that's the VOA Special English Technology Report, written by June Simms. Transcripts, MP3s and podcasts of our reports are at 51voa.com. I'm Steve Ember.