Barbara Cooney, 1917-2000: She Created Many Popular Books for Children

Update Required To play the media you will need to either update your browser to a recent version or update your Flash plugin.
By Avi Arditti
2012-2-18 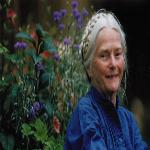 SHIRLEY GRIFFITH: For sixty years Barbara Cooney created children's books. She wrote some. And she provided pictures for her own books and for books written by others. Her name appears on one hundred ten books in all.

The last book was published six months before her death. It is called "Basket Moon." It was written by Mary Lyn Ray. It tells the story of a boy who lived a century ago with his family in the mountains in New York state. His family makes baskets that are sold in town. One magazine describes Barbara Cooney's paintings in "Basket Moon" as quiet and beautiful. It says they tie together "the basket maker's natural world and the work of his craft."

STEVE EMBER: Barbara Cooney was known for her carefully detailed work. One example is in her artwork for the book "Eleanor." It is about Eleanor Roosevelt, who became the wife of President Franklin Roosevelt. Miz Cooney made sure that a dress worn by Eleanor as a baby was historically correct down to the smallest details.

Another example of her detailed work is in her retelling of "Chanticleer and the Fox." She took the story from "Canterbury Tales" by English poet Geoffrey Chaucer. Barbara Cooney once said that every flower and grass in her pictures grew in Chaucer's time in fourteenth-century England.

SHIRLEY GRIFFITH: Barbara Cooney wondered at times if her concern about details was worth the effort. "How many children will know or care?" she said. "Maybe not a single one. Still I keep piling it on. Detail after detail. Whom am I pleasing -- besides myself? I don't know. Yet if I put enough in my pictures, there may be something for everyone. Not all will be understood, but some will be understood now and maybe more later."

Miz Cooney gave that speech as she accepted the nineteen fifty-nine Caldecott Medal for "Chanticleer and the Fox." The American Library Association gives the award each year to the artist of a picture book for children. She received a second Caldecott Medal for her folk-art paintings in the book, "Ox-Cart Man."

The scratchboard is made by placing white clay on a hard surface. Thick black ink is spread over the clay. The artist uses a sharp knife or other tool to make thousands of small cuts in the top. With each cut of the black ink, the white clay shows through. To finish the piece the artist may add different colors.

Scratchboard is hard work, but this process can create fine detail. Later, Barbara Cooney began to use pen and ink, watercolor, oil paints, and other materials.

SHIRLEY GRIFFITH: Barbara Cooney was born in New York City in nineteen seventeen. Her mother was an artist and her father sold stocks on the stock market. Barbara graduated from Smith College in Massachusetts in nineteen thirty-eight with a major in art history.

During World War Two Barbara Cooney joined the Women's Army Corps. She also got married, but her first marriage did not last long. Then she married a doctor, Charles Talbot Porter. They were married until her death. She had four children.

STEVE EMBER: Barbara Cooney said that three of her books were as close to a story of her life as she would ever write. One is "Miss Rumphius," published in nineteen eighty-two. We will tell more about "Miss Rumphius" soon.

The second book is called "Island Boy." The boy is named Matthias. He is the youngest of twelve children in a family on Tibbetts Island, Maine. Matthias grows up to sail around the world. But throughout his life he always returns to the island of his childhood. Barbara Cooney also traveled around the world, but in her later years always returned to live on the coast of Maine.

SHIRLEY GRIFFITH: The third book about Barbara Cooney's life is called "Hattie and the Wild Waves." It is based on the childhood of her mother. The girl Hattie lives in a wealthy family in New York. One day she tells her family that she wants to be a painter when she grows up. The other children make fun of the idea of a girl wanting to paint houses.

Hattie tries different jobs as she grows up. At last, she follows her dream and decides to "paint her heart out."

STEVE EMBER: Of all of Barbara Cooney's books, the one that seems to affect people the most is "Miss Rumphius." It won the American Book Award. It was first published in nineteen eighty-two by Viking-Penguin. "Miss Rumphius" is Alice Rumphius. A young storyteller in the book tells the story which begins with Alice as a young girl:

ADRIENNE ARDITTI: "In the evening Alice sat on her grandfather's knee and listened to his stories of faraway places. When he had finished, Alice would say, 'When I grow up, I too will go to faraway places, and when I grow old, I too will live beside the sea.'

‘That is all very well, little Alice,' said her grandfather, 'but there is a third thing you must do.'

'What is that?' asked Alice.

‘You must do something to make the world more beautiful,' said her grandfather.

'All right,' said Alice. But she did not know what that could be.

In the meantime Alice got up and washed her face and ate porridge for breakfast. She went to school and came home and did her homework.

And pretty soon she was grown up."

SHIRLEY GRIFFITH: Alice traveled the world. She climbed tall mountains where the snow never melted. She went through jungles and across deserts. One day, however, she hurt her back getting off a camel.

ADRIENNE ARDITTI: "'What a foolish thing to do,' said Miss Rumphius. 'Well, I have certainly seen faraway places. Maybe it is time to find my place by the sea.' And it was, and she did.

Miss Rumphius was almost perfectly happy. 'But there is still one more thing I have to do,' she said. 'I have to do something to make the world more beautiful.'

But what? 'The world is already pretty nice,' she thought, looking out over the ocean."

STEVE EMBER: The next spring Miss Rumphius' back was hurting again. She had to stay in bed most of the time. Through her bedroom window she could see the tall blue and purple and rose-colored lupine flowers she had planted the summer before.

ADRIENNE ARDITTI: "'Lupines,' said Miss Rumphius with satisfaction. 'I have always loved lupines the best. I wish I could plant more seeds this summer so that I could have still more flowers next year.'

But she was not able to."

SHIRLEY GRIFFITH: A hard winter came, then spring. Miss Rumphius was feeling better. She could take walks again. One day she came to a hill where she had not been in a long time. "'I don't believe my eyes,' she cried when she got to the top. For there on the other side of the hill was a large patch of blue and purple and rose-colored lupines!"

ADRIENNE ARDITTI: "'It was the wind,' she said as she knelt in delight. ‘It was the wind that brought the seeds from my garden here! And the birds must have helped.' Then Miss Rumphius had a wonderful idea!"

STEVE EMBER: That idea was to buy lupine seed -- lots of it. All summer, wherever she went, Miss Rumphius would drop handfuls of seeds: over fields, along roads, around the schoolhouse, behind the church. Her back did not hurt her any more. But now some people called her "That Crazy Old Lady."

The next spring there were lupines everywhere. Miss Rumphius had done the most difficult thing of all. The young storyteller in the book continues:

ADRIENNE ARDITTI: "My Great-aunt Alice, Miss Rumphius, is very old now. Her hair is very white. Every year there are more and more lupines. Now they call her the Lupine Lady. ...

"'When I grow up,' I tell her, 'I too will go to faraway places and come home to live by the sea.'

'That is all very well, little Alice,' says my aunt, 'but there is a third thing you must do.'

"'You must do something to make the world more beautiful.'"

SHIRLEY GRIFFITH: Many readers, young and old, would agree that Barbara Cooney did just that.

STEVE EMBER: Many of Barbara Cooney's later books took place in the small northeastern state of Maine. She spent summers there when she was a child, then moved to Maine in her later years.

She loved Maine. She gave her local library almost a million dollars. The state showed its love for her. In nineteen ninety-six, the governor of Maine declared Barbara Cooney a "State Treasure."

MARY TILLOTSON: This Special English program was written by Avi Arditti and produced by Paul Thompson. Our audio engineer was Bob Phillips. Your narrators were Shirley Griffith, Steve Ember, and Adrienne Arditti. Join us again next week for another PEOPLE IN AMERICA program on the Voice of America.