Update Required To play the media you will need to either update your browser to a recent version or update your Flash plugin.
By Jerilyn Watson
2011-10-29 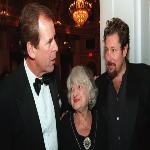 Photo: AP
Peter Jennings, left, Betty Friedan, center, and Julian Schnabel stop for a chat after receiving Lifetime Achievment Awards from the Academy of the Arts in New York

STEVE EMBER: And I'm Steve Ember with PEOPLE IN AMERICA in VOA Special English. Today we tell about Betty Friedan. She was a powerful activist for the rights of women.

FAITH LAPIDUS: Betty Friedan is often called "the mother of the modern women's liberation movement." Her famous book, "The Feminine Mystique," changed America. Some people say it changed the world. It has been called one of the most influential nonfiction books of the twentieth century.

Friedan re-awakened the feminist movement in the United States. That movement had helped women gain the right to vote in the nineteen twenties. Modern feminists disagree about how to describe themselves and their movement. But activists say men and women should have equal chances for economic, social and intellectual satisfaction in life.

STEVE EMBER: Fifty years ago, life for women in the United States was very different from today. Very few parents urged their daughters to become lawyers or doctors or professors. Female workers doing the same jobs as men earned much less money. Women often lost their jobs when they had a baby. There were few child-care centers for working parents.

Betty Friedan once spoke to ABC television about her support for sharing responsibility for the care of children. Betty Friedan laid the groundwork for the modern feminist movement

BETTY FRIEDAN: "If child-rearing was considered the responsibility of women and men or women and men and society, then we really could pull up our skirts and declare victory and move on."

FAITH LAPIDUS: Betty Friedan was born Betty Goldstein in nineteen twenty-one in Peoria, Illinois. Her immigrant father worked as a jeweler. Her mother left her job with a local newspaper to stay home with her family.

Betty attended Smith College in Northhampton, Massachusetts. It was one of the country's best colleges for women. She finished her studies in psychology in nineteen forty-two.

After college she attended the University of California at Berkeley to continue her studies. Her boyfriend at the time did not want her to get an advanced degree in psychology. He apparently felt threatened by her success. So Betty left California and her boyfriend. She moved to New York City and worked as a reporter and editor for labor union newspapers.

In nineteen forty-seven, Betty Goldstein married Carl Friedan, a theater director who later became an advertising executive. They had a child, the first of three. The Friedans were to remain married until nineteen sixty-nine.

STEVE EMBER: When Betty Friedan became pregnant for the second time, she was dismissed from her job at the newspaper. After that she worked as an independent reporter for magazines. But her editors often rejected her attempts to write about subjects outside the traditional interests of women.
In nineteen fifty-seven, Friedan started research that was to have far-reaching results. Her class at Smith College was to gather for the fifteenth anniversary of their graduation. Friedan prepared an opinion study for the women. She sent questions to the women about their lives. Most who took part in the study did not work outside their homes.

Friedan was not completely satisfied with her life. She thought that her former college classmates might also be dissatisfied. She was right. Friedan thought these intelligent women could give a lot to society if they had another identity besides being homemakers.

FAITH LAPIDUS: Friedan completed more studies. She talked to other women across the country. She met with experts about the questions and answers. She combined this research with observations and examples from her own life. The result was her book, "The Feminine Mystique," published in nineteen sixty-three.

The book attacked the popular idea of the time that women could only find satisfaction through being married, having children and taking care of their home. Friedan believed that women wanted more from life than just to please their husbands and children. 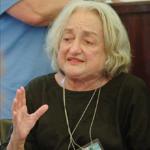 The book said women suffered from feelings of lack of worth. Friedan said this was because the women depended on their husbands for economic, emotional and intellectual support.

STEVE EMBER: "The Feminine Mystique" was a huge success. It has sold more than three million of copies. It was reprinted in a number of other languages. The book helped change the lives of women in America. More women began working outside the home. More women also began studying traditionally male subjects like law, medicine and engineering.

Betty Friedan expressed the dissatisfaction of some American women during the middle of the twentieth century. But she also made many men feel threatened. Later, critics said her book only dealt with the problems of white, educated, wealthy, married women. It did not study the problems of poor white women, single women or minorities.

BETTY FRIEDAN: "We are now strong enough ourselves to see men not as bread winners, not as instruments, not as sex objects, not as enemies, not as stereotypes, but human beings, our brothers."

BETTY FRIEDAN: "Liberating ourselves, we will then become a major political force, perhaps the biggest political force for basic social and political change in America in the seventies."

STEVE EMBER: Betty Friedan led a huge demonstration in New York City for women's rights. Demonstrations were also held in other cities. A half-million women took part in the Women's Strike for Equality on August twenty-sixth, nineteen seventy. The day marked the fiftieth anniversary of American women gaining the right to vote.

A year after the march, Friedan helped establish the National Women's Political Caucus. She said the group got started "to make policy, not coffee." She said America needed more women in public office if women were to gain equal treatment.

FAITH LAPIDUS: Friedan wanted a national guarantee of that equal treatment. She worked tirelessly to get Congress and the states to approve an amendment to the United States Constitution that would provide equal rights for women. The House of Representatives approved this Equal Rights Amendment in nineteen seventy-one. The Senate approved it the following year. Thirty-eight of the fifty state legislatures were required to approve the amendment. Congress set a time limit of seven years for the states to approve it. This was extended to June thirtieth, nineteen eighty-two. However, only thirty-five states approved the amendment by the deadline so it never went into effect.

The defeat of the E.R.A. was a sad event for Betty Friedan, NOW, and other activists.

STEVE EMBER: In nineteen eighty-one, Betty Friedan wrote about the condition of the women's movement. Her book was called "The Second Stage." Friedan wrote that the time for huge demonstrations and other such events had passed. She urged the movement to try to increase its influence on American political life.

Some younger members of the movement denounced her as too conservative.

As she grew older, Friedan studied conditions for older Americans. She wrote a book called "The Fountain of Age" in nineteen ninety-three. She wrote that society often dismisses old people as no longer important or useful. Friedan's last book was published in two thousand. She was almost eighty years old at the time. Its title was "Life So Far."

Betty Friedan died on February fourth, two thousand six. It was her eighty-fifth birthday. Betty Friedan once told a television reporter how she wanted to be remembered.

BETTY FRIEDAN: "She helps make it better for women to feel good about being women, and therefore she helped make it possible for women to more freely love men."

FAITH LAPIDUS: This program was written by Jerilyn Watson. It was produced by Lawan Davis. I'm Faith Lapidus.

STEVE EMBER: And I'm Steve Ember. You can download a transcript and audio of this show at 51voa.com. Join us again next week for PEOPLE IN AMERICA in VOA Special English.