Bombings in Uganda Raise New Worries About Group in Somalia

Update Required To play the media you will need to either update your browser to a recent version or update your Flash plugin.
By VOA
2010-7-16 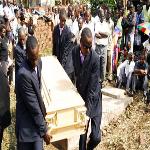 Photo: AP
The burial of Alice Kyalimpa, one of over 70 people killed Sunday in a bombing in Kampala. Al-Shabab claimed responsibility.

Ugandans buried their dead this week after bombings that killed more than seventy people in Kampala. The victims, including an American, were watching the World Cup final on television Sunday at two social places in the capital.

The group al-Shabab says it organized the attacks because Uganda supplies troops to support the temporary government in Somalia. Al-Shabab is tied to al-Qaida and aims to make Somalia into an Islamic state. It controls large parts of Mogadishu and the south. Al-Shabab means "The Youth" in Arabic.

The Kampala bombings were its first attacks outside Somalia -- and its leader called them "just the beginning."

On Thursday several Mogadishu radio stations broadcast a message from Ahmed Abdi Godane, also known as Abu Zubayr. He said attacks will continue as revenge for the deaths of Somalis killed by African Union peacekeepers in Mogadishu. Human rights groups have condemned all sides in the Somali capital for causing civilian deaths.

Officials say the African Union will hold its big meeting in Kampala this coming week as planned. Somalia is expected to be a major issue.

More than six thousand peacekeepers from Uganda and Burundi are in Mogadishu to protect the airport, seaport and other places. The United States has provided them with light weapons, training and other support.

Al-Shabab has also made new threats to target Burundi's capital, Bujumbura. But Uganda is the main provider of troops to the African Union Mission in Somalia. Uganda plans to send two thousand more troops. And President Yoweri Museveni recently joined other east African leaders in calling for a mission with twenty thousand troops.

He says Ugandan troops in Somalia have been involved only in defensive duties. Now, he is calling for an offensive against al-Shabab. But several Ugandan and other east-African politicians and commentators have urged Uganda to withdraw.

Uganda's main opposition leader this week asked why Uganda and Burundi are providing troops while other African leaders ignore the problem.

For three years, al-Shabab has led militants in battles -- mostly against the peacekeepers -- for control of Mogadishu. Only a few city blocks remain under government control. 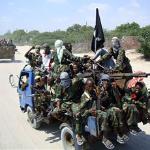 Al-Shabab fighters during an exercise in Mogadishu early this year

Uganda sent the first troops in March of two thousand seven to help secure the capital. That was after Ethiopia's military ousted Islamists from power.

The bombings in Kampala have led to a number of arrests. An unexploded suicide bomb vest was found at a third location, a disco club.

President Obama says the attacks show that extremists have no respect for African lives or efforts for a better future. He told the South African Broadcasting Corporation that al-Shabab and other terror groups must be stopped.

BARACK OBAMA: "If al-Shabab takes more and more control within Somalia, it is going to be exporting violence the way it just did in Uganda."

Includes reporting by Peter Heinlein in Uganda, Alisha Ryu and Michael Onyiego in Kenya, Kent Klein at the White House and David Gollust at the State Department.