Update Required To play the media you will need to either update your browser to a recent version or update your Flash plugin.
By Mario Ritter and Mil Arcega
2010-12-16 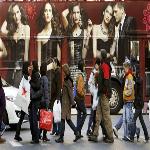 Photo: AP
Shoppers walk in front of a bus with a huge clothing advertisement on Black Friday. The Friday after the Thanksgiving holiday is one of the biggest shopping days of the year

The season for buying Christmas gifts is the busiest time for most stores and online retailers in the United States. Final numbers for the holiday season including after-Christmas sales will not be known for a while. But a report this week on retail sales in November suggested that economic growth may be gaining speed.

The Commerce Department said sales increased for the fifth month in a row. They grew by eight-tenths of one percent over October.

But Tuesday's report came the same day the central bank said the economy is not growing fast enough to reduce unemployment.

So, policy makers at the Federal Reserve voted to continue a program of buying government bonds. That program, launched in November, could inject six hundred billion dollars into the economy.

The aim is to increase economic growth by lowering long-term interest rates. That would reduce borrowing costs for businesses and individuals.

But long-term rates have risen since the Fed launched its latest program of so-called quantitative easing, known as "QE2."

The rates are up in part because investors are concerned about government policies. But experts say investors may also be more hopeful about the economy and looking for investments with higher returns than Treasury securities.

One way to get a sense of how Americans feel about the economy is through retail sales. Consumer demand drives about seventy percent of the nation's economic activity.

The National Retail Federation says its members employ twenty-five million people in the retail and services industry. Those businesses reported almost two and a half trillion dollars in sales last year. 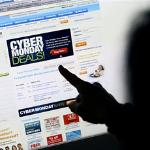 The Monday after Thanksgiving is a big day for Internet shopping. Online sales during Cyber Monday have grown since the day got its name in 2005

Terry Lundgren is chief executive of Macy's, the company that owns Macy's and Bloomingdales department stores.

TERRY LUNDGREN: "Retail and restaurants represent one in five jobs in America. So if we do well, we grow, than we're going to be the ones that will start to lead us into a recovery and out of the difficulty that we've had in terms of job hiring, unemployment and all of those challenging issues that relate to that."

The kinds of stores where sales are up also says something about the economy. Stores with the lowest prices do well in hard economic times. But the retail federation said at the end of November that discounters had fewer shoppers this year. Stores that sell jewelry and other higher-priced items have seen sales grow.

Another change: Americans are less willing to buy on credit. Over forty percent of holiday shoppers said they planned to mainly use debit cards instead of credit cards. Instead of borrowing money, debit cards take money directly from a bank account.