Britain Gets a Government, as Europe Gets a Plan to Save the Euro

Update Required To play the media you will need to either update your browser to a recent version or update your Flash plugin.
By VOA
2010-5-13 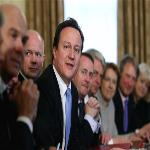 European Union officials agreed on a debt rescue plan this week. They also got a message from Britain's new governing parties.

WILLIAM HAGUE: "It was not difficult to agree between us that neither party is in favor of handing any more powers to the European Union."

That was William Hague, the new foreign secretary. In last Thursday's elections, the Conservatives won the most seats in parliament but not a majority. So they and the Liberal Democrats have formed Britain's first coalition government since World War Two.

In his place moves David Cameron of the Conservative Party. At forty-three he is Britain's youngest head of government since eighteen twelve. Nick Clegg of the Liberal Democrats is his deputy.

Their new government will have to deal with Britain's own debt crisis. The budget deficit is about twelve percent of the economy. David Cameron has promised nine billion dollars in budget cuts as a start. Both parties agreed to make no proposal for Britain to join the sixteen countries that use the euro.

Markets have eased since Monday's announcement of a nearly one trillion dollar rescue plan. It involves loans, debt guarantees and other support to euro area countries with heavy debts. Some of the money will come from the International Monetary Fund.

The crisis in Greece has threatened to spread to other countries and has led to protests and violence over spending cuts. But now, interest rates for borrowing by troubled countries like Greece and Portugal have fallen sharply.

Many people blamed the Greek crisis for the sudden drop in American stock markets last Thursday. It may have played a part. But this week, officials told Congress they were still investigating the causes of the so-called flash crash.

Major stock exchanges have agreed to develop a plan to prevent a disorderly market like that again. The idea is to slow trading in a coordinated way.

The Dow Jones Industrial Average fell nearly one thousand points in minutes, then largely recovered. The plunge renewed debate about the risks of electronic exchanges and high-speed computer trading systems.