Update Required To play the media you will need to either update your browser to a recent version or update your Flash plugin.
By VOA
2011-7-8 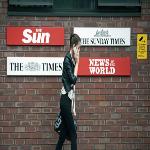 Photo: Reuters
A woman speaks on her mobile phone outside the News International headquarters building that houses News of the World

British reporters are known for doing almost anything to get a story. But reports that a newspaper secretly listened to telephone messages of murdered schoolgirls and other private citizens have produced shock and anger.

On Friday, British police arrested Andy Coulson, former editor of Britain's best-selling newspaper, News of the World. The investigation led him to resign in January as communications director to Prime Minister David Cameron.

The arrest came in a widening investigation of telephone hacking. Other accusations include paying police for information on stories. The Reuters news agency reported that Mr. Coulson was released on bail until a date in October.

Prime Minister Cameron promised Friday that a judge will lead a full public inquiry into the case after police complete their investigation.

DAVID CAMERON: "Murder victims, terrorist victims, families who have lost loved ones, sometimes defending our country, that these people could have had their phones hacked into, in order to generate stories for a newspaper, is simply disgusting."

He also called for a second investigation.

DAVID CAMERON: "The second inquiry should look at the culture, the practices and the ethics of the British press. In particular, they should look at how our newspapers are regulated and make recommendations for the future. Of course, it is vital that our press is free, that is an essential component for our democracy, for our way of life. But press freedom does not mean that the press should be above the law."

On Thursday, the company News International said it will stop publishing the weekly News of the World. News International belongs to Rupert Murdoch's News Corporation, also known as News Corp. The one hundred sixty-eight-year-old newspaper will publish for the last time on Sunday.

The case is not new. But new evidence may show that the phone of a murdered schoolgirl, Millie Dowler, was hacked while she was declared missing in two thousand two. Some phone messages may have been deleted to make room for more messages, giving her family false hope that she was still alive.

Police say possible victims also include relatives of those killed in the London transport bombings on July seventh, two thousand five. Others whose phones may have been hacked include parents of soldiers killed in Iraq and Afghanistan.

Prime Minister Cameron called the hacking reports, "disgusting," "disgraceful" and despicable." But he himself is facing attention for having asked Andy Coulson to serve as his media adviser. Mr. Coulson resigned from News of the World in two thousand seven. He left when a reporter and a private investigator were briefly jailed for listening to the phone messages of aides to Britain's royal family.

The prime minister says Mr. Coulson told him he had no knowledge of the phone hacking incidents. He says he wanted to give Mr. Coulson a "second chance."

Rupert Murdoch was at a conference of media and technology leaders in Idaho on Thursday, but had no comment for reporters.

RUPERT MURDOCH: "I have nothing to say at this stage."

Rupert Murdoch was born in Australia. He became a citizen of the United States in nineteen eighty-five so he could buy American television stations. His father, Keith Murdoch, was a famous World War One reporter who later led an Australian newspaper group. After his father died, the younger Murdoch took control of the two newspapers that his father owned.

Today, he is a media "colossus," says Ivor Gaber, a journalism professor at London's City University.

IVOR GABER: "He doesn't control the media in every country but it's very difficult to travel to most parts of this world without encountering a Rupert Murdoch media product."