Update Required To play the media you will need to either update your browser to a recent version or update your Flash plugin.
By Paul Thompson
2011-12-3 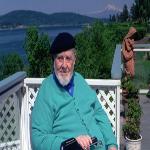 Photo: AP
Burl Ives was photographed outside his home in Anacortes, Washington which looked out on the San Juan Islands

SHIRLEY GRIFFITH: And I'm Shirley Griffith with the VOA Special English Program, PEOPLE IN AMERICA. Today we tell about Burl Ives. He won a Grammy award for his music and an Oscar for his acting.

STEVE EMBER: In nineteen-fifty-eight Burl Ives appeared in the western movie, The Big Country. He played the part of a man who controls huge amounts of land. In the movie, he is not a nice man. He is mean and respects nothing but power. He causes problems for the people around him.

Burl Ives won the Academy Award Oscar that year as the Best Supporting Actor. People who knew him well say it was really great acting. That is because Burl Ives was one of the nicest men they had ever met. Burl Ives was not mean. He was a large, friendly man who loved to make people happy with his acting and especially with his music. Burl Ives made music for adults and for children

Except when he acting in a movie, Burl Ives always smiled. He loved making music and wanted other people to enjoy the music he made. If you listen closely to his voice, you can tell he was smiling when he sang his songs. Listen now as he sings "Blue Tail Fly."

SHIRLEY GRIFFITH: Burl Ives was one of seven children. He was born in June, nineteen-oh-nine in the middle western state of Illinois. Mister Ives said he began learning songs as a very little boy. His grandmother taught him to sing while she smoked tobacco in a pipe.

As a young man, Burl wanted to teach history. So, he began attending Eastern Illinois Teacher's College in nineteen-twenty-seven. But he was not a very good student.

The president of the college told him one day he would never be a very good teacher. He said, "Burl why don't you look around a little. You are always singing, why don't you try that."

STEVE EMBER: Burl Ives said he did not even go back to his room to pick up his clothing. He just went down the road and never looked back. He took his guitar and began traveling around the United States.

Burl Ives went to New York City in the early nineteen-thirties. He was admitted to the famous Julliard School of Music to study. He also got jobs in New York. He sang in small eating and drinking places. He sang the songs he had learned. By nineteen-thirty-eight he was performing in theaters. He was singing on the radio and was part of a group called The Weavers, which became famous. 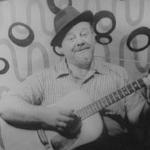 He began recording the folk songs he had learned. Critics said no one ever sung them better. He recorded "Blue Tail Fly" and made it famous. Another of his songs that became very popular was called, "Big Rock Candy Mountain." The song is a funny story about a homeless man who tells of a place where you do not have to work, where food is free and tobacco is free. It is a place called Big Rock Candy Mountain.

Songs like "Big Rock Candy Mountain" could be heard on the Burl Ives radio program each week. The radio program was called The Wayfarin' Stranger. It was first broadcast in nineteen-forty. Burl Ives had recorded many songs but he did not have a major hit until nineteen-forty-seven. That song was "Lavender Blue."

STEVE EMBER: During the nineteen fifties, Burl Ives recorded hundreds of songs on many albums. He also began serious movie work. He had played the part of Big Daddy in the famous Tennessee Williams play Cat on a Hot Tin Roof on Broadway in New York City.

He was asked to play the same part in the movie of the same name. Movie experts praised his powerful performance as Big Daddy. The movie was released in nineteen-fifty-eight, the same year he won his Oscar for the movie Big Country.

In nineteen-sixty-one, Burl Ives recorded a song that became another major hit. It made the top ten list of hit songs in country and western and popular music. The song was "Little Bitty Tear."

SHIRLEY GRIFFITH: "Little Bitty Tear" was followed a year later with another hit, "It's Just My Funny Way of Laughin." The song earned Burl Ives a Grammy Award that year for Best Country and Western Recording.

STEVE EMBER: It is his songs for children that will perhaps keep Burl Ives' memory alive for many years to come. His most famous are two Christmas songs, "Rudolph the Red Nosed Raindeer," and "Frosty the Snowman."

These songs were used in cartoon movies first shown on American television in the nineteen-fifties and sixties. Burl Ives provided the voice of some of the animals and people. He also sang most of the songs. A snowman in one of the movies even looks like Burl Ives.

Both of these moves are still shown on television during the Christmas holiday season each year. They have become Christmas traditions. Here, Burl Ives sings "Rudolph the Red Nosed Raindeer."

SHIRLEY GRIFFITH: Burl Ives never really retired. He moved to the northwestern state of Washington in his last years, but he continued to sing as long as he could. He died of cancer on April Fourteenth, nineteen-ninety-five. He was eighty-five years old.

(MUSIC - IT'S JUST MY FUNNY WAY OF LAUGHIN')

SHIRLEY GRIFFITH: And I'm Shirley Griffith. Join us again next week for PEOPLE IN AMERICA program on the Voice of America.