Burma's Elections a Test for Reforms

Update Required To play the media you will need to either update your browser to a recent version or update your Flash plugin.
By VOA
2012-3-30 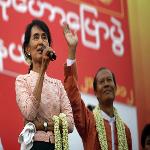 Photo: Reuters
Burma's Aung San Suu Kyi, left, gives her speech beside a candidate for the National League for Democracy party in Yangon.

Burma is holding elections on Sunday. Voters will fill forty-five seats in elections for the national legislature or parliament.

This will be the first vote in the country since the end of almost fifty years of military rule. Yet the armed forces still have strong influence over the government. One-fourth of the seats are for military appointees.

Two years ago, the Union Solidarity and Development Party won seventy-six percent of the vote in the most recent elections. Since then, the government has eased restrictions on the media and freed hundreds of political prisoners.

Aung Zaw is with the online newspaper, "The Irrawaddy." He recently visited Burma after living in exile for twenty years. He says many Burmese are guarded about the reforms.

Burmese exiles have long been critical of Burma's government.

The opposition National League for Democracy did not take part in elections two years ago. The party won parliamentary elections in nineteen ninety, but Burma's rulers never recognized the results.

This year, party leader Aung San Suu Kyi is a candidate, and is expected to win a seat in the legislature. On Friday, the Nobel Peace Prize winner met with reporters and diplomats at her home in Rangoon. She said her party's candidates faced threats and violence in the election campaign. And, she said the vote on Sunday cannot be called free and fair.

AUNG SAN SUU KYI: "I don't think we can consider it a genuinely free and fair election if we take into consideration what has been going on for the last couple of months. But still, as we wish to work towards national reconciliation, we will try to tolerate what has happened. And we hope that the courage and resolution of the people will overcome the intimidations and other irregularities that have been taking place."

Some observers say the recent changes in Burma will have a big effect. Reporter Thiha Saw says the vote will be an important test for the country.

THIHA SAW: "I watch it very closely because this will be something like a marker or a test about the sincerity of the regime. Are they going to make it really free and fair? If it is going to be free and fair, the people in the western communities will start lifting the sanctions. So this is important for Burma as well as for the international community, too."

Other observers are less hopeful for a fair vote, but say it will still be important. Burma's government has invited observers from Asia, Australia, Canada, the European Union and the United States to witness the voting. Reporters from around the world are in Burma to report on the elections.