Update Required To play the media you will need to either update your browser to a recent version or update your Flash plugin.
By VOA
2011-2-18 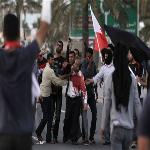 Photo: AP
An anti-government protester in Bahrain is carried to a vehicle to be taken to a hospital after being shot Friday during a demonstration in Manama

Anti-government protests continued this week in several countries across the Middle East and North Africa.

In Bahrain, the crown prince went on television Friday and appealed for calm. Thousands of mourners tried to return to Pearl Square in Manama, the capital, after a funeral for an anti-government protester.

Security forces fired on the mourners, who were disobeying a protest ban. Local officials and witnesses said at least twenty-three people were wounded. Later, angry protesters gathered next to a hospital. Many shouted "Down with Khalifa" -- Bahrain's King Hamad bin Isa al-Khalifa.

The military cleared Pearl Square of protesters during a raid on Thursday. The protests in Bahrain began on Monday.

In Yemen, demonstrators have been calling for more than a week for President Ali Abdullah Saleh to resign. Thousands protested across Yemen on Friday. Protesters fought with security forces in Aden. Medical officials say four people were shot to death.

At least one person was killed in the city of Taiz. A passenger in a car threw a grenade that exploded as a crowd demonstrated against the Yemeni government.

In Amman, Jordan, witnesses say at least eight people were injured when government supporters used sticks to attack demonstrators. Jordan has had weeks of protests demanding constitutional changes and limits on the power of King Abdullah.

But a top Iranian religious leader told a prayer service at Tehran University that execution was needless. Ayatollah Ahmad Jannati said the two men were, in a sense, dead already because they have lost their influence. Both men have been held effectively under house arrest this week.

On Monday, the Green Movement held its first public protest in a year. The movement grew out of Iran's disputed presidential election in two thousand nine. Opposition websites have called for nationwide demonstrations on Sunday.

In a separate development, Egypt approved a request for two Iranian navy ships to pass through the Suez Canal. Israel's Foreign Minister says the ships are expected to sail toward Syria. This is believed to be Iran's first naval mission into the Mediterranean in years.

And in Cairo, thousands of Egyptians crowded into Tahrir Square on Friday for a day of celebration. They marked one week since President Hosni Mubarak resigned.