Celebrating the 50th Anniversary of 'To Kill a Mockingbird'

Update Required To play the media you will need to either update your browser to a recent version or update your Flash plugin.
By Anna Boiko-Weyrauch
2010-7-7 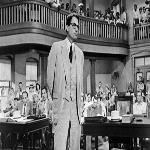 Photo: ASSOCIATED PRESS
A scene from the 1962 film version of Lee's book. Gregory Peck, center, won an Academy Award for his part as Atticus Finch

Millions of high school students have read "To Kill a Mockingbird." The novel by Harper Lee offers moral lessons about racial justice and respect. It tells the story of a young girl named Scout and her father, Atticus Finch, a lawyer. He defends a black man wrongfully accused of raping a white woman. In the end, an all-white jury sentences Tom Robinson to death.

The book is set in the American South in the nineteen thirties. But it was published fifty years ago, on July eleventh, nineteen sixty. It came out as the civil rights movement in the United States was gaining strength. Laws and customs in the South, however, still kept blacks and whites mostly separated.

A mockingbird is a kind of gray songbird. The book gets its title from something Atticus Finch was told in his childhood when his father gave him a gun. Gregory Peck won an Academy Award for the nineteen sixty-two film version.

ATTICUS FINCH: "I remember when my daddy first gave me that gun, he told me that I should never point at anything in the house, and that I could shoot all the blue jays I wanted, if I could hit them. But remember, it was a sin to kill a mockingbird." 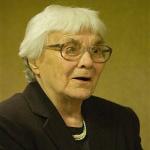 Harper Lee, writer of "To Kill A Mockingbird," at an event in 2007. Her most famous book won a Pulitzer Prize in 1961

Killing them is a sin, he explains, because they don't hurt anyone, they just make music. And that is the moral of the story, says Melinda Byrd-Murphy, head of the Alabama Center for Literary Arts.

She has read the book four times.

MELINDA BYRD-MURPHY: "I think if anything, this story talks about humanity and the universality of humans and how there's goodness in people and you just have to get to know one another."

Ms. Byrd-Murphy is a native of Harper Lee's hometown of Monroeville. The author, who published only the one novel, is still alive but rarely speaks publicly.

Some people say "To Kill a Mockingbird" treats racism in a way that is simplistic, even offensive to blacks, and out of date in today's America. Still, it has been translated into more than forty languages and has sold over forty million copies. It won a Pulitzer Prize and is often required reading in high school.

The story takes place in a town that Harper Lee called Maycomb. But she based the characters on real people she knew growing up.

Since then, Monroeville has changed a lot. A number of African-Americans serve in the local government. The courthouse, made famous by the book, is now a museum. A small shop and a fast-food restaurant called Mel's Dairy Dream have replaced Harper Lee's childhood home.

But in Monroeville and around the country, fans of "To Kill a Mockingbird" are celebrating its fiftieth anniversary. Events include readings, discussions and movie showings.