Update Required To play the media you will need to either update your browser to a recent version or update your Flash plugin.
By VOA
2011-6-15 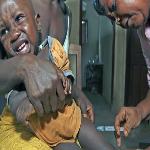 Photo: Reuters
A child in Sierra Leone receives a vaccination through a program supported by the GAVI Alliance.

International donors have promised more than four billion dollars to the Global Alliance for Vaccines and Immunization. That group, known as the GAVI Alliance, held a pledging conference Monday in London.

GAVI raised six hundred million dollars more than its target goal. Britain led the donations with 1.3 billion dollars in new pledges through twenty-fifteen. The Bill and Melinda Gates Foundation also promised one billion more over the next five years.

Last week, the group announced an agreement by vaccine makers to cut prices for developing countries. These lower prices, combined with the money raised this week, could protect an extra two hundred fifty million children.

Jeffrey Rowland is a GAVI spokesman.

JEFFREY ROWLAND: "GAVI's goal over the next five years, by twenty-fifteen, is to immunize millions more children and save an additional four million children's lives, purely by providing basic vaccines against diseases that are basically almost non-existent in rich countries, as well as providing new vaccines against pneumonia, diarrheal diseases and then hopefully HPV and some other vaccine-preventable diseases."

HPV is the human papillomavirus, which can lead to cervical cancer. The disease kills two hundred thousand women a year, mostly in developing countries. The Merck company has agreed to offer GAVI the HPV vaccine at five dollars a dose. This is two-thirds less than the current price.

Other companies including GlaxoSmithKline and Merck will lower prices for rotavirus vaccines. That virus causes diarrhea that kills about half a million children a year.

JEFFREY ROWLAND: "Almost all children in the world get rotavirus. The thing is that in the United States or in Europe children usually have good access to medical care -- so rehydration, antibiotics, hospitalization. Children in poor countries, on the other hand, usually do not. So, by the time a mother brings her child to a clinic after having diarrhea, that child is near death. And oftentimes the antibiotics and the services are not available to save the child's life."

A rotavirus vaccine in the United States can cost as much as fifty dollars. Under the new plan, this same vaccine could cost about two and a half dollars in a developing country.

And that's the VOA Special English Health Report. You can read, listen and learn with our programs, and share them with others, at 51voa.com. I'm Jim Tedder.