Update Required To play the media you will need to either update your browser to a recent version or update your Flash plugin.
By Mario Ritter
2010-10-7 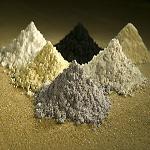 Few people had ever heard of the natural elements known as rare earth metals before a recent dispute between China and Japan. Yet these metals are used in devices like smartphones, flat screens, hybrid car batteries, MP3 players and military equipment.

In September, Japan detained a Chinese ship captain near disputed islands in the East China Sea. China denied that it stopped exports of rare earth metals to Japan to force his release. But the incident raised concerns.

Japan is the world's biggest importer of rare earths. And China produces ninety-seven percent of the world supply.

GEORGE HALEY: "So unlike other minerals, the price of rare earth elements, after the nineteen eighties when they started production, has actually fallen."

Some countries with rare earth metals no longer mine them -- including the United States. One reason is the low-cost imports from China. Another reason is concerns about environmental damage .

So what are these rare earth metals? Well, most of them are not rare; that is just their name. Several are more common than copper, lead or silver.

People who remember the periodic table of the elements from chemistry class might recognize them. Rare earths include the fifteen lanthanide metals along with yttrium and scandium.

Samuel Bader, a physicist at the Argonne National Laboratory near Chicago, says rare earths are often found together.

SAMUEL BADER: "They all have similar chemical properties. Once you do find them, they are very difficult to separate from each other."

But Mr. Bader explains that the same properties that make them hard to refine also make them valuable.

SAMUEL BADER: "Rare earth metals provide the world's strongest commercial magnets. This is why they're important. It's that simple."

Rare earth magnets are lightweight and unaffected by conditions like high temperatures. So they work well in places like electric motors in hybrid vehicles or generators for wind turbines. Physicists use super-powerful magnets to speed particles and control radiation like X-rays.

And the list goes on, says George Haley, who has studied the subject.

GEORGE HALEY: "Electronics, fiber optics, you could go down the list of products important not just for the economic success of the United States, but for our defense and for our job creation here at home."

Next week, we'll talk more about rare earth metals, and an American company that plans to start mining them again. And that's the VOA Special English Economics Report, written by Mario Ritter. And follow us on Facebook, Twitter, YouTube and iTunes at VOA Learning English. I'm Jim Tedder.