How Cooling the Brain May Help People Sleep

Update Required To play the media you will need to either update your browser to a recent version or update your Flash plugin.
By Brianna Blake, Jim Tedder and Jerilyn Watson
2011-7-11


FAITH LAPIDUS: This is SCIENCE IN THE NEWS, in VOA Special English. I'm Faith Lapidus.

BOB DOUGHTY: And I'm Bob Doughty. Today, we tell how cooling the brain may help people who have trouble going to sleep. We also tell about two endangered animals that are in danger of disappearing forever.

FAITH LAPIDUS: Are you having a problem going to sleep? Try drinking a glass of warm milk. If that does not work, listen to some soft, beautiful music. Still no luck? Try thinking about sheep jumping over a fence. Count them to yourself. "One, two, three, four...one hundred ninety five, one hundred ninety..."

It is late at night and you are still awake. Should you take a sleeping pill? People who take pills often come to depend on the drugs. So you lie awake knowing that the new work day will soon arrive. If this happens to you for at least one month, you may have primary insomnia. There are millions of you...us...around the world.

Eric Nofzinger and Daniel Buysse of the University of Pittsburgh Medical School led the study. They examined twelve people who had insomnia. Twelve others had no sleep problems. Each of them wore a soft plastic cap on their heads at bed time.

The researchers found that the water caps did not help the insomnia patients until the temperature was about fourteen degrees Celsius. Most of the patients fell asleep faster and slept better when the coolest water was moving around their heads.

Dr. Nofzinger and Dr. Buysee noted that this is only the beginning of the brain temperature study. But they believe they have discovered something important that needs more research. They presented their test results in June at a meeting of the Associated Professional Sleep Societies in Minneapolis, Minnesota. 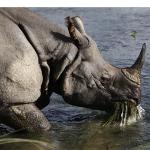 BOB DOUGHTY: Scientists completed a census in Nepal recently. This population study, however, did not count people. Instead, biologists and other people counted the number of greater one-horned rhinoceros in the Himalayan nation.

The greater one-horned rhinoceros is in danger of disappearing. In general, the animals live only in protected areas of Nepal and India. India has most of them.

The population study showed that five hundred thirty-four one-horned rhinos now live in Nepal. That is an increase of ninety-nine rhinos since two thousand eight. Five hundred three of the animals were observed in Chitwan National Park. Thirty-one others live in another national park and a wildlife area.

The census marks the first time that more than five hundred rhinos were seen in Nepal since the nation's civil war. Animal-traders killed many rhinos during that conflict, fought from nineteen ninety six to two thousand six.

FAITH LAPIDUS: Rhinoceros horns are valued in Asian medicines. They also are popular in some Middle Eastern and Asian cultures. The horns have a beautiful, shining quality after carved and made smooth. They are sometimes seen on daggers, short, pointed knives, and in objects like ceremonial cups.

Illegal rhino hunting was a big reason that only one hundred of the animals lived in the Chitwan Valley in nineteen sixty-six. Over the years, the Nepali rhino population has increased and decreased. But life became more secure for the animals in nineteen seventy-three. At that time, Nepal established the Chitwan National Park, first called Royal Chitwan National Park. It was the first wildlife area of its kind in the nation. Nepal opened it to save the one-horned rhinoceros.

Officials have taken strong steps to protect this huge grassland and forest animal. People caught killing rhinos are sentenced to prison. Continuing efforts like the census support the population.

BOB DOUGHTY: During the recent count, scientists measured the population from seats on the backs of elephants. The census-takers had cameras, radio handsets and rhino date-recording books. They also carried GPS receivers that show the position of the user. There were also GPS supplies and books to record the presence of an invasive plant. The plant threatens the grasslands where rhinos live.

The scientists and technicians identified each rhino by the shape and size of its horn. They also looked for body markings like cuts and old healed wounds. The animals' necks and backsides were inspected for pieces of skin that lie one on top of the other. The census takers noted the numbers of males and females.

Shubash Lohani is an official of WWF's Eastern Programs. He expressed satisfaction that the country has more rhinoceros. But he warned that illegal trade and loss of homelands continue to threaten the rare animals.

FAITH LAPIDUS: Since ancient times, people have respected cheetahs for their speed and beauty. Some cheetahs can reach speeds of up to one hundred ten kilometers an hour.

There were once more than one hundred thousand of the animals in Africa and Asia. But over the past century, that population has dropped to about ten thousand. Today, cheetahs are mainly found in twenty-four African countries.

Yet the cheetah population has started to recover because of one woman. Her name is Laurie Marker. 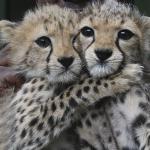 LAURIE MARKER: "I started working with cheetahs when I lived in Oregon – I ran a wildlife park there. This was back in the early seventies and nobody knew anything about cheetahs, and I was fascinated about them. And the more people I asked, they said when you find out something about cheetahs let us know, they don't do well in captivity, they have a very short lifespan, and we're losing them throughout the ranges in the world. So that just made me fascinated and I wanted to know everything there was about them."

FAITH LAPIDUS: Laurie Marker traveled to Namibia to learn as much about cheetahs as she could. The African nation is home to the world's largest wild cheetah population.

LAURIE MARKER: "Understanding about how the cheetah lives is really important. So understanding its biology and its behavior, understanding the ecology of it, which really revolves around where it's living and how it's living, and that interfaces with humans."

BOB DOUGHTY: In nineteen ninety, Ms. Marker founded the Cheetah Conservation Fund, a not-for-profit group with offices in Namibia. The group carries out research and offers educational programs. It also develops ways to fight some of the biggest threats to cheetahs, including clashes with farmers.

Some farmers kill cheetahs because they attack and feed on cattle, sheep and goats. So Laurie Marker started working with local farming communities to find ways to protect their livestock from the big cats.

In nineteen ninety-four, she proposed that Namibian farmers use Anatolian Shepherds to protect their cattle and other animals. Ms. Marker now raises and trains the guard dogs, which put themselves between the livestock and any attacker.

LAURIE MARKER: "This breed has been used for about five thousand years to protect livestock from predators. And they act as a guardian by avoidance – they bark loudly, they tell a predator that they're there protecting the flock, and the flock will come around the dog and by the dog barking – the predator doesn't want to get hurt – and they will then avoid those flocks where the dogs are."

FAITH LAPIDUS: Over the past fifteen years, CCF has bred and given more than four hundred dogs to Namibian farmers. They have reported up to an eighty percent decrease in livestock losses. At the same time, many farmers have grown to accept having cheetahs around.

LAURIE MARKER: "Since our time in Namibia the population of cheetahs there was about a thousand to fifteen hundred individuals. Today it's probably thirty five hundred, maybe four thousand cheetahs. So we've been able to really grow the population. And that's out of a world population of about ten thousand."

FAITH LAPIDUS: Ms. Marker would like to keep growing that number by expanding the CCF programs to other countries where cheetahs once lived.

Today, Laurie Marker is considered one of the world's leading experts on cheetahs. She travels the world giving speeches and attending money-raising events to increase understanding of this highly endangered animal.

LAURIE MARKER: "If we are not successful we're going to lose this amazing species in a very short period of time."

BOB DOUGHTY: This SCIENCE IN THE NEWS was written by Brianna Blake, Jim Tedder and Jerilyn Watson. Our producer was June Simms. I'm Bob Doughty.

FAITH LAPIDUS: And I'm Faith Lapidus. Join us again next week for more news about science in Special English on the Voice of America.