Update Required To play the media you will need to either update your browser to a recent version or update your Flash plugin.
By June Simms and Caty Weaver
2011-12-15

Photo: AP
Adele performs on stage last February during the Brit Awards 2011 at The O2 Arena in London

I'm Doug Johnson. Today on the program: some favorite songs of top music critics for two thousand eleven. We also play music from some of the top selling artists.

But first we tell about someone working to increase the number of African American women in a specialized industry.

DOUG JOHNSON: Comic strips and comic books are popular in the United States. What makes comics different from other printed media is that they use pictures to tell a story. Most of the stories are funny or filled with action.

BARBARA KLEIN: Cheryl Lynn Eaton has been a lover of comics since she was a child. She formed an organization called The Ormes Society in two thousand seven. She hopes the group will help to increase interest in comics among African American women.

CHERYL LYNN EATON: "The Ormes Society is an organization dedicated to promoting black women as creators, artists and writers, as consumers of sequential art and comics and the organization was named after Jackie Ormes, who was the first African American female cartoonist."

Artist Jackie Ormes made comics from the nineteen thirties to the nineteen fifties. Her work was published in two leading African American newspapers of that time: The Pittsburgh Courier and The Chicago Defender. Cheryl Lynn Eaton first learned about her work in a report by comic book historian Tim Jackson.

Ms. Eaton says most of the images that other artists were producing at the time were very offensive to African Americans.

CHERYL LYNN EATON: "Works that demonized African Americans and exaggerated their features in horrific ways and projected them as ignorant, unintelligent, and unable to be heroes. And here Jackie was producing works that had women who were doing things who were heroic and funny and witty and smart and it was just very important to know about this woman."

Jackie Ormes created a number of characters, but the most famous were two sisters named Patty Jo and Ginger. The two were from an upper class family. They were fashionable and intelligent. They often discussed the social and political issues of the day.

Diamond Comic Distributors, the leading supplier of comics, reported nearly three hundred forty million dollars in sales in North America during the first ten months of the year. Cheryl Lynn Eaton says she hopes to persuade other African Americans to work in the industry.

DOUG JOHNSON: This week we are taking a look ... and a listen ... to the music that came out during two thousand eleven. This was a good year for female artists. Most critics place Adele, Beyoncé, Lady Gaga and others high on their list of best recordings. Electronic music also saw a jump in popularity. And, billions were made by artists on tour, even during troubled economic times.

Come along with us has our two thousand eleven musical tour.

The British singer Adele is at the top of most critics' best singles list. Spin, Rolling Stone and Billboard magazine each named her song "Rolling in the Deep" as the best song of the year.

"Rolling in the Deep" tells the story of a woman rejected by her boyfriend. The song expresses her anger as she realizes the man was not what he appeared to be.

Finally I can see you crystal clear

Spin magazine compares the song to the Bible story in which the ancient Israelites destroy the walls of Jericho by blowing their trumpets. 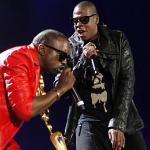 Rolling Stone magazine chose Adele's record album "21" as the best of the year. Number two on the list was "Watch the Throne," the joint effort by Kanye West and Jay-Z. Spin placed "Otis," a single from that album, at number seventeen on its twenty best songs of the year.

The website Pitchfork.com chose its forty favorite music videos of two thousand eleven. One of them was from the folk rock group Fleet Foxes. "The Shrine/An Argument" is a beautifully animated video filled with human-like and animal-like creatures all wearing masks. The animation is mostly in red, brown and other earthy colors. It opens with a deer mourning the death of a loved one. The animal leans close to the body and then pushes it off a cliff.

"The Shrine/An Argument" is a song in three movements. Here is part of the first. 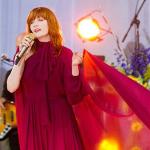 Florence and the Machines made many of the "best" lists of two thousand eleven. "Ceremonials," the group's second album, was released October thirty-first. New Musical Express, or NME.com, included the song "Shake It Out" on its fifty best tracks list.

Billboard.com released a list of the top twenty-five tours of the year. The list is based on tickets sales.

Taylor Swift had the top selling country music tour, coming in at number five on Billboard's list. But it was another country singer, Jason Aldean, who had a break-out year. Fifty of his shows were sold out. His album "My Kinda Party" also sold more than two million copies, more than any other country album this year. 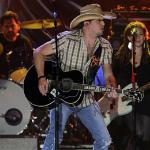 Jason Aldean performs at the CMT Artists of the Year television taping on last month in Nashville, Tennessee

We leave you with the song that Billboard called a set list essential for Jason Aldean's current tour. Here is "See You When I See You," from "My Kinda Party."

DOUG JOHNSON: I'm Doug Johnson. Our program was written by June Simms and Caty Weaver, who was also our producer.