Dealing With Sexual Violence on Campus

Update Required To play the media you will need to either update your browser to a recent version or update your Flash plugin.
By VOA
2011-5-25 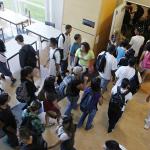 Photo: AP
Federal officials say many colleges and other schools in the US are not doing enough to deal with sexual violence

Last week, we told you about a call for American educators to do more to protect students from sexual violence on campus. The government recently sent a letter telling schools, colleges and universities that such violence is a form of sex discrimination.

That means it violates a nineteen seventy-two law against discrimination on the basis of sex in education programs and activities.

The letter says schools must take steps like making sure victims know their rights and are kept informed about investigations. Victims must also be protected if the accused attacker is still in school with them.

Russlyn Ali is the assistant secretary for civil rights at the Department of Education. She and her staff wrote that letter.

RUSSLYN ALI: "Our sense of urgency could not be greater, and as I'm sure any parent in America would say, they don't want their child to go to college or school and have to be worried about being raped. And we are going to work with officials to make sure that doesn't happen."

One of those officials is Mary Mayhew. She leads efforts to prevent sexual harassment and rape at the University of New Hampshire. That was where Vice President Joe Biden and Education Secretary Arne Duncan released the guidance letter in April.

Ms. Mayhew says she believes sexual violence on campuses has actually decreased over the past twenty years. She says schools are getting better at educating students to understand the idea of consent -- or, put more simply, that no means no.

MARY MAYHEW: "Between nineteen eighty-eight and two thousand was when we really started implementing education campaigns about what consent is. So we educated, you know, the population and that did amount to some degree of prevention."

Ms. Mayhew says the warning from the government to pay more attention to the problem might lead more schools to start or expand their programs. At the same time, however, it might also lead to an increase in reports of sexual assaults. Not necessarily because the problem has gotten worse, she says, but because more students will know their rights and be willing to report attacks on campus.

Russlyn Ali at the Education Department says the government is ready to take action against schools that fail to protect their students.

RUSSLYN ALI: "Where there are violations, and in the case where officials are not willing to comply with the nation's civil rights laws, we will enforce the laws vigorously."

And that's the VOA Special English Education Report. If you missed last week's report, or if you want to read that nineteen-page letter, go to 51voa.com. And, while you're there, tell us how schools and government officials in your country deal with this issue. You can also find us on Facebook and Twitter at VOA Learning English. I'm Christopher Cruise.