Dementia Cases May Triple by 2050 as World Ages

Update Required To play the media you will need to either update your browser to a recent version or update your Flash plugin.
By VOA
2012-4-17 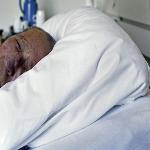 Photo: Reuters
An unidentified man suffering from Alzheimer's disease sleeps all day before passing away in a nursing home in the Netherlands, July 2008. (file photo)

Dementia is the loss of mental abilities caused by brain disorders that affect memory, thinking, behavior and judgment. The most common cause of dementia, especially in older people, is Alzheimer's disease. It causes up to seventy percent of dementia cases.

Worldwide an estimated thirty-six million people are living with dementia. A new report predicts that number will increase to more than one hundred fifteen million by twenty-fifty.

The report is from the World Health Organization and Alzheimer's Disease International. Marc Wortman is the executive director of this group of seventy-eight Alzheimer's associations.

MARC WORTMANN: "There is a new case now in every four seconds, a new case of dementia in the world. Only ten years ago, it was calculated at one in seven seconds, so it is speeding up. And if you look into the future projections, it may be close to one in every second by the year twenty-fifty. So we need to act. We need to do something to stop this epidemic."

The number of cases in the heavily populated developing world is expected to grow as more people live longer. The report says more than half of those with dementia now live in low- and middle-income countries. This number is likely to rise to more than seventy percent by twenty-fifty.

People are living longer because of better health care and increasing wealth. But the report says dementia is not a normal part of growing old.

Shekhar Saxena is the director of mental health and substance abuse research at the WHO.

SHEKHAR SAXENA: "Dementia is often not recognized. It is commonly mistaken for an age-related decline in functioning because it can mimic age-related problems, and also it progresses slowly. Even in high-income countries, only one-fifth to one-half of the cases of dementia are routinely recognized. This percentage is obviously much lower in middle and low-income countries."

Martin Prince is a professor at Kings College London. He says many people wrongly believe that dementia and Alzheimer's disease are not problems in poorer countries.

MARTIN PRINCE: "There have been some more studies done recently in western Africa, which, I think give the lie to the notion that Alzheimer's disease is very rare amongst all the people in Africa. There are fewer older people because life expectancy is shorter, particularly with the ravages of HIV. But, amongst people who live into old age, the prevalence of dementia looks quite similar to high-income countries."

The world currently spends more than six hundred billion dollars a year to treat and care for people with dementia. Yet the WHO says only eight countries currently have national programs in place to deal with dementia.

It urges greater efforts to identify dementia early, educate the public and provide better care. Dementia may be incurable, but health officials say much can be done to improve the lives of people who have it, and support their families and caregivers.