Update Required To play the media you will need to either update your browser to a recent version or update your Flash plugin.
By June Simms
2010-4-18 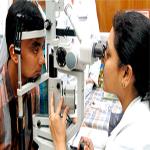 This is the VOA Special English Development Report.

An eye care organization in India is being honored for its efforts. On Tuesday, Aravind Eye Care System will receive the Conrad N. Hilton Humanitarian Prize. The award will be presented in Redwood City, California, during a conference of the Global Philanthropy Forum.

Conrad Hilton, who made his wealth in the hotel industry, established the humanitarian prize in nineteen ninety-six. Each year the award is given to a charitable or nongovernmental organization working to end human suffering. The prize includes one and a half million dollars.

Aravind Eye Care System is being recognized for its work with millions of people in India.

An estimated forty-five million people are blind, and India is home to ten million of them.

About seventy percent of the patients receive free care. The money comes from the thirty percent of patients who can pay for their services.

In nineteen ninety-two, Aravind established what was described as Asia's first training center for the prevention of blindness. Support from the SightFirst program of Lions Club International financed the Lions Aravind Institute of Community Ophthalmology.

Aravind Eye Care System has been recognized internationally. Its work has been used as a model for establishing similar programs around the world.

And that's the VOA Special English Development Report, written by June Simms. Transcripts, MP3s and podcasts of our programs can be found at 51voa.com. You can also visit us on Facebook, Twitter and YouTube at VOA Learning English. I'm Steve Ember.