Update Required To play the media you will need to either update your browser to a recent version or update your Flash plugin.
By Caty Weaver
2011-9-15

And answer a question about casinos...

But first, we ride the waves with some special surfers.

STEVE EMBER: Dana Cummings was in his thirties before he first went surfing. That is older than most first timers. But, even more interesting is that Dana Cummings chose to learn the sport after losing a leg in a car accident. Now, nine years later, he helps other disabled people learn how to ride the waves. Katherine Cole has our story about the organization AmpSurf.

KATHERINE COLE: Dana Cummings is on the coast of Maine. He is working with twenty-seven year old Matthew Fish, who is partly blind. Cummings takes hold of Fish and leads him into the ocean. The surfboard floats next to them.

Fish lies on the surfboard. He tries to stand up on it. After a few attempts he is up and riding all the way back to land. He is excited.

MATTHEW FISH: "That was a thrill."

DANA CUMMINGS: "Let's do it again."

Dana Cummings served two tours of duty as a Marine in Iraq during the nineteen ninety Gulf War. He returned home without injury. But a car accident in two thousand two took his leg. Dana Cummings says the crash changed him more than just physically.

DANA CUMMINGS: "I was just existing, not living. It took me to lose my leg to realize how precious life is and get off the couch and start living. I do more things now than I ever did before. Next week I am going to compete in a contest in Hawaii."

Dana Cummings formed AmpSurf in two thousand three. AmpSurf is a not-for-profit group that holds surfing classes and events for people with all kinds of disabilities. The group's headquarters is in California.

Recently, AmpSurf took its training programs to the East Coast. Eleven students attended the class in Maine. They had come from all over the northeastern United States.

Fifty-seven-year-old Brian Foss is from New Hampshire. He has been disabled almost all his life.

BRIAN FOSS: "I had polio in nineteen fifty-five, when I was two years old, the year the vaccine came out, actually. I missed it by a little bit."

Brian Foss's legs are weak and he uses crutches to walk. But he loves skiing, riding a bicycle and, most recently, surfing.

BRIAN FOSS: "It's a sense of being able to fly, and a sense of freedom. You're not constrained by gravity, almost."

BRIAN FOSS: "These guys just give you that confidence and make you believe you can do it. Encouragement, they're strong so I know that I can hang on them if I need to when I'm walking out. I know that I'm not going to get in trouble."

Shaun McLaughlin of Massachusetts was the youngest surfing student on a recent day. He is six years old. Shaun was born with only one foot. But he is ready to ride the waves.

SHAUN MCLAUGHLIN: "You got to, like, lay down and then do this and then you just gotta' stand up and that's pretty much how you do it."

DANA CUMMINGS: "Most people with disabilities their whole life everybody focuses on their disability, and we want them to see what they can do. Who cares, you lost your leg, you're blind, whatever. Have fun. Just enjoy life. Take the most advantage of it you can."

STEVE EMBER: Our question this week comes from China. Jiaqi Huang wants to know about casino development in the United States.

A casino is a place where people can win -- or lose -- a lot of money. They do this by gambling -- playing cards, dice or other games of chance. They could also win money by predicting the results of horse races, football games and other activities.

Gambling has a long history in the United States. Even in colonial times, the government permitted lotteries. In a lottery a person buys a chance to win money or other prizes. Money raised in this way helped support the development of the colonies.

Experts say the first casinos in America were saloons. People went to saloons to buy alcoholic drinks. But some of these businesses let people play card games or throw dice for money. Later, gamblers began to use riverboats, especially on the Mississippi River, to play games for money.

It seems that Americans have always had concerns about gambling. Some thought it was a sign of moral corruption. Gambling was also often blamed for increasing crime. Others worried that the financial risks people took when gambling would ruin the economic future of the country.

There have been bans on gambling and periods of legal gambling in the United States. In the eighteen-hundreds, most states banned many kinds of gambling. However, the discovery of gold in the west renewed the activity. And many states eased their gambling laws during the Great Depression of the nineteen-thirties.

Today Hawaii is the only state to ban all forms of gambling. The most popular places for legal gambling are casinos. The most famous casino city is Las Vegas, Nevada. Illegal crime organizations from New York were responsible for developing much of Las Vegas in the early to middle twentieth century.

Now, Las Vegas is filled with casino/hotels of all sizes. Many are beautifully designed and offer many services. An example is the Luxor, a huge, black pyramid-shaped building. It is named for the ancient city in Egypt. The Luxor has thousands of gambling machines, four large swimming pools, almost thirty stores and a chapel where people can get married. A thirty-four meter tall reproduction of Egypt's Great Sphinx of Giza stands in front of the pyramid. 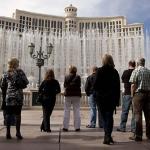 Visitors watch the dancing fountain at the Bellagio Hotel and Casino in Las Vegas, Nevada

The Bellagio in Las Vegas has even more to offer. The Bellagio has its own man-made lake, more than three hectares in size. Huge fountains light up the property. The water jumps up and down, and is programmed to move to music. The hotel is home to a big, beautiful chandelier. This special lighting fixture was hand-blown by the famous glass artist Dale Chihuly. The Bellagio also has its own art gallery and, for plant lovers, a botanic garden.

Many Las Vegas casinos also offer shows that have included famous singers like Celine Dion and Barbra Streisand. There are also other acts like Circque du Soleil. And visitors can even see Broadway musicals, like "The Lion King."

STEVE EMBER: Trombone Shorty is a jazz musician who is tall on skill. His new album "For True" includes guest performers from the worlds of country, rock and soul music. Faith Lapidus has our story.

FAITH LAPIDUS: Trombone Shorty has a sound he likes to call "supafunkrock." It is a combination of rock, hip-hop, soul, funk and New Orleans jazz.

The twenty-five year old musician is from New Orleans. His real name is Troy Andrews. He grew up in the Treme neighborhood of the city. 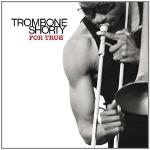 He has played himself in "Treme," an HBO cable television program. He says he met a lot of the guest musicians while working on the new album over the past two years. One was guitar great, Jeff Beck. Here they perform "Do To Me."

"For True" is Troy Andrew's second album. He and his back-up band, Orleans Avenue, released the first one, "Backatown," last year. Here they perform with country music star Kid Rock on "Mrs. Orleans."

Troy Andrews may be nicknamed Trombone Shorty, but he is also an excellent trumpet player. That instrument can be heard on the new album. We leave you with Shorty Trombone performing "For True."

STEVE EMBER: I'm Steve Ember. Our program was written and produced by Caty Weaver, with additional reporting by Josie Huang. If you have a question about American life, send it to mosaic@voanews.com or click on the Contact Us link at 51voa.com. You can follow us on Facebook and Twitter at VOA Learning English.